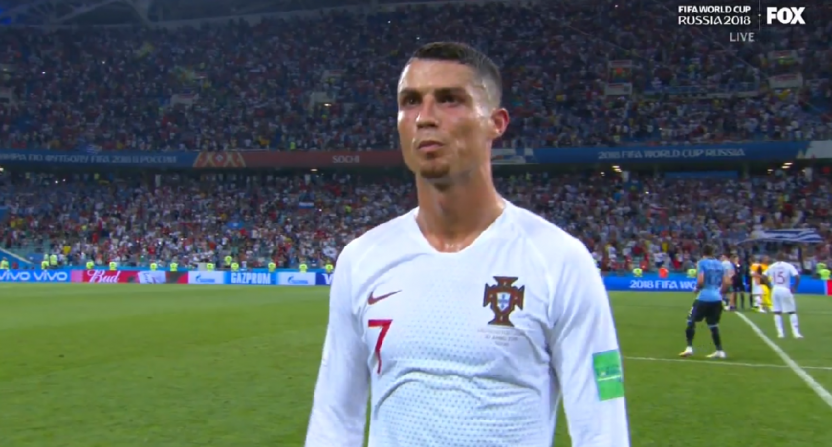 With the United States missing out on the World Cup, Fox has taken a ratings hit.

That was to be expected, of course, and it’s not an indictment of Fox. Today featured the first round of knockout games, and it also featured perhaps Fox’s best shot at a big ratings day; it’s a weekend, first of all, meaning more people are available for the late morning/early afternoon match window. But more than that, today’s matches featured the two biggest names in soccer, as Messi’s Argentina faced France while Ronaldo’s Portugal took on Uruguay.

Fox wasn’t shy about hoping for Messi and Ronaldo to advance; when this section of the draw was finalized, Rob Stone mentioned the possibility right away. Again, this is understandable! It’s easy narratives, the two biggest stars in the sport, who have reigned over the game for the last decade, facing off on a massive stage. Of course, it’s a team sport, which cost Messi today, as he was directly or indirectly involved with all three of Argentina’s goals, only to see his team fall 4-3.

Messi was hoping to carry his team to the quarterfinals, but it was Mbappé who stole the show.

Watch the highlights of France vs Argentina in our 90' in 90" ⬇️ pic.twitter.com/R1QfhrTu3Q

Ronaldo, meanwhile, was held fairly quiet, aside from one very loud statement from his thighs.

At this rate Ronaldo might just take the shorts off completely for his next free kick pic.twitter.com/ZAGVgWLUim

Uruguay’s Edinson Cavani scored two fantastic goals, and that was enough to hold off Portugal.

And with that, Ronaldo and Portugal were out too. France and Uruguay might very well be the two best teams out of those four, and both teams have familiar names populating their squads, but none of them are Messi and Ronaldo. So while the dream scenario for Fox was seeing the two stars face off (with the added benefit of either Messi or Ronaldo guaranteed to be in the semifinals), the nightmare scenario is this, with both of them gone on the first day of the knockout stage.

The World Cup is an event in itself, of course, and if anything the overreliance on the individual narratives of Ronaldo and Messi can be grating at times. But they are still Ronaldo and Messi. The World Cup is better with stars in it, and Fox was really close to a match they obviously wanted, only to see it taken away. It’s reminiscent of how ESPN was a Wondo goal away from the USMNT facing Messi and Argentina on the Fourth of July in 2014.

The blow isn’t as big for Fox because the ceiling isn’t as high, but they definitely lost out on some easy interest. Relative to the United States missing out it’s nothing, of course, but it’s still a bit of a blow for Fox as the rest of the tournament unfolds.