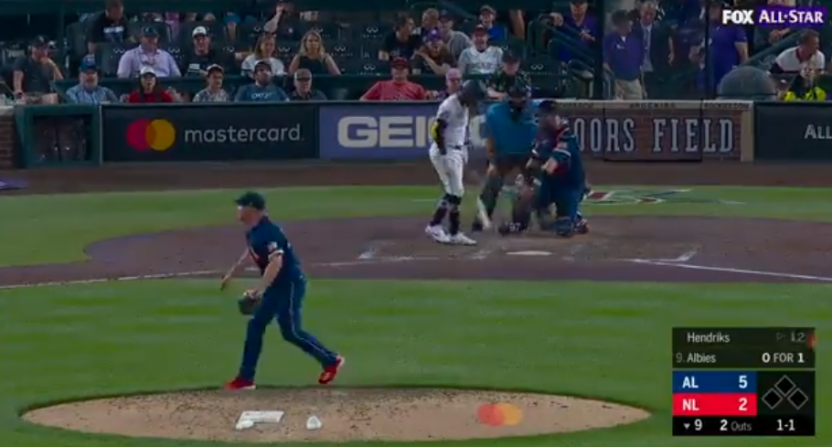 Fox had players mic’d up and even wearing earpieces to do interviews while in the field for the MLB All-Star Game on Tuesday night at Coors Field. That led to some very cool moments with players sharing their thoughts before or after pitches during the game, and even featured interviews while players were in the batter’s box or on the pitching mound (some awkward moments too, but some fun stuff as well- and keep in mind it’s an exhibition game meant to entertain fans).

Well, in the bottom of the ninth inning, Chicago White Sox closer Liam Hendriks was mic’d up and had an earpiece. Fox play-by-play man Joe Buck tried to interview Hendriks during the inning, but the right-hander couldn’t hear Buck (or was simply ignoring Buck). What we did get were plenty of sounds from Hendriks on the mound, and that featured some colorful language.

Here are a couple of examples (Buck’s casual “two balls and a strike” after the first clip makes it even funnier):

Liam Hendriks says bad words while mic'd up on the mound. pic.twitter.com/ugBnkLClK2

For anybody that has watched the very intense Hendriks pitch over the years, this is hardly a surprise, and Fox should’ve known that. And it’s of course the risk that comes with having players mic’d up. Newsflash: professional athletes swear plenty in the middle of competition.

Many viewers would be thrilled with getting this authentic, HBO-esque viewing experience always, but it’s also something Fox and MLB probably don’t want to be heard loud and clear during a major event.

Despite Hendriks’ frustration, he threw a scoreless inning and got the save in a 5-2 win for the American League.