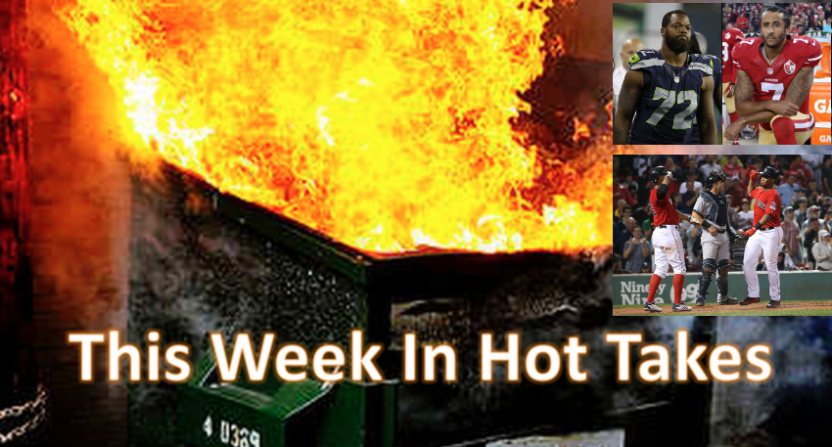 Welcome to another edition of This Week In Hot Takes, this time breaking down all the hottest sports media takes from Sept. 1-7.

5. Ray Lewis says he tried to get Ravens to sign Colin Kaepernick, was stopped by Kaepernick’s girlfriend’s “racist gesture”: Lewis has previously made this column for telling Kaepernick “Let your play speak for itself” and “what you do off the field, don’t let too many people know,” and he’s back again thanks to his comments on Showtime’s Inside The NFL (where he’s a new analyst this season) Wednesday. Lewis created a firestorm there by saying that he lobbied Baltimore Ravens’ owner Steve Bisciotti to sign Kaepernick, but was foiled by Kaepernick’s girlfriend Nessa Diab tweeting a “racist gesture” (a comparison of Lewis to a slave in Django Unchained) in response to Lewis’ own comments telling Kaepernick to keep quiet off the field:

“Then, his girl [Colin Kaepernick’s girlfriend] goes out and put out this racist gesture and doesn’t know we are in the back office about to try to get this guy signed. Steve Bisciotti has said it himself, ‘How can you crucify Ray Lewis when Ray Lewis is the one calling for Colin Kaepernick?’…

“When they (Ravens) called me, it was to say, ‘Yes’ or ‘No.’ … We were going to close the deal to sign him… Steve Bisciotti said, ‘I want to hear Colin Kaeperkick speak to let me know that he wants to play football.’… And it never happens because that picture comes up the next day. “

Judy Battista: “So, if not for that… tweet, you think he would be a Baltimore Raven”

Ray Lewis: “Then he’s flying him to Baltimore.  I am sitting with all three of them and we are all having a conversation about bringing Colin Kaepernick in.“

First off, this reads as a lot of non-factual self-promotion from Lewis, especially considering the “never been against Colin Kaepernick, but I am against the way he’s done it” comments. Lewis is the last person who should be talking about players’ off-field behavior considering his involvement in two murders in 2000 (he was charged with two counts of murder, but made a deal to testify against his friends and eventually pled guilty to obstruction of justice), but he’s consistently criticized Kaepernick in the media; this seems like a way to try and change that narrative. Beyond that, Lewis got ethered by Dave Zirin for this, with a reference to Lewis’ infamous links to deer antler spray even:

If the Ravens would sign someone who was party to a double homicide, a tweet alone would not stop them.

Yes. It's a gendered statement, too. Telling wives & gfs to stay quiet or else.

It's cheap. It's easy. It creates a target for male fans. And it's sexist as hell. Stay classy, Ray Lewis. (thank you Maggie) https://t.co/lRa0J2Nui6

So, yeah, this latest attempt to exonerate himself while still bashing Kaepernick (and Diab, in this case) wasn’t a great look for Lewis.

4. Albert Breer cites option’s decline as a reason Kaepernick’s unemployed, gets roasted: Breer has had some of the worst takes on Kaepernick (including wondering about his motivation and using anonymous sources to suggest he didn’t work hard) and many other matters, and he stayed on brand this week, publishing a MMQB story about the decline of quarterback option offenses at the NFL level (valid) and suggesting that’s a major reason Kaepernick’s unemployed (not so much). Here are his first tweets promoting it:

And I know some people might not wanna hear it. But this story, I hope, explains why Kap-the-player carries far less value than he once did.

Breer then took criticism for it, but didn’t back down:

Kaepernick isn't just a read-option quarterback, though. I'd expect you to know better & address facts, like 13 TDs from the pocket last yr.

What kinda offense was he playing in last year? Who was the coach? Are there other offenses like that one in the NFL now? Fair questions? https://t.co/tv5izJcFAC

Not sure why Kap only ran read option 10% of the time last year, so this really has nothing to do with him at all. https://t.co/kg8c7s7Ctn

Per PFF data, Kap had more option keepers than any QB in NFL in '16 despite starting 11 games. That's not counting gives or passes off it. https://t.co/u5xn7ER6aT

Cian Fahey (of ESPN’s Nickel Package podcast and Pre-Snap Reads) particularly roasted Breer on this one, but Breer dismissed him as a “Twitter scout”:

That whole article is a travesty so I have just one simple response. pic.twitter.com/R2vGK2j9Hp

Breer has had a worse offseason than anyone and Jermaine Kearse got traded from the Seahawks tot he Jets.

This entire thing is nonsense. See @cianf who does this funny thing and uses actual data to show why this is nonsense. https://t.co/xeLWG5s9ZI

That’s typical Breer, claiming both that people are saying something they really aren’t and then pretending that passing along quotes from people with an agenda of making it look like the NFL isn’t blackballing Kaepernick equals reporting. But Richard Sherman’s response was even better:

Really doesn't Albert. Just look like bad evaluators on Bad teams. Ppl that have made mistakes before and won't even put their name on it

“Really doesn’t Albert” may become the go-to response to Breer.

.@stephenasmith says if he was the owner of the Ravens he wouldn’t sign Colin Kaepernick because of his girlfriend’s tweet. pic.twitter.com/OKBeEzwA6X

“I’m not signing that brother. Go kick rocks. You can get the hell up out of here. It’s on you. You know why? Because she didn’t just issue a tweet. We heard nothing from Colin Kaepernick. When you’re together, you’re as one, and when you do things, it’s a reflection on the person that you’re with.”

As with Lewis, this tendency to say athletes should control their partners and be held responsible for their comments is problematic. (And did Stephen A. have similar takes on Tom Brady not telling Gisele Bundchen to keep quiet about concussions or who he voted for?)

Yeah, just going with the police union statement and bashing Bennett despite video supporting his claims is a great idea, Doug.

1. Rob Parker calls Boston the “Biggest Cheaters Of All Time”:

"I'm not surprised it came from this team & this town. Boston is now the B.C.O.A.T. (Biggest Cheaters of All Time)"—@RobParkerFS1 on Red Sox pic.twitter.com/3smzDQNHkY

Parker is known for insanely hot takes and ludicrous acronyms, and he got both in here in this discussion of the Red Sox Apple Watch controversy. “There’s a thing called integrity!” Well, it’s doubtful that Mr. “Cornball Brother” Parker knows what that is. And Parker going in on Boston with “This is what this city is about!” is hilarious. Even Skip Bayless and Shannon Sharpe are laughing at him here.