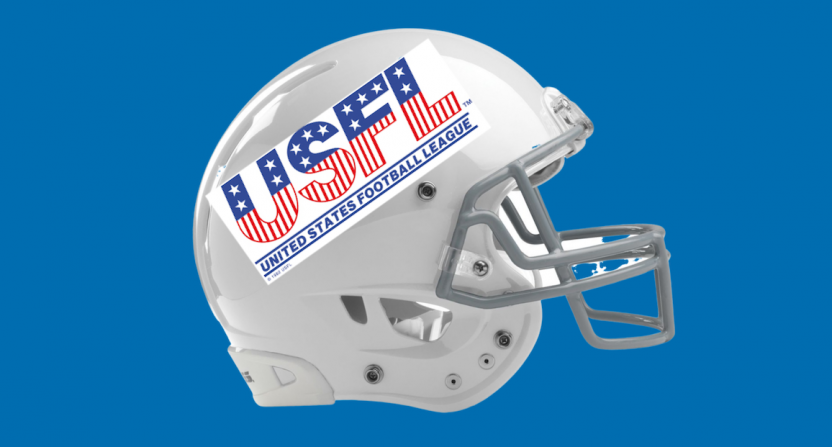 With upstart football ventures such as the AAF, XFL, and Spring League attempting to establish themselves during the NFL offseason, it was probably only a matter of time before the original spring football league tried to take that territory again.

As first reported by Sports Business Journal, the USFL is returning in 2022, planning to launch with at least eight teams and Fox Sports lined up as a broadcast partner. According to John Ourand, Fox will also hold a minority stake in the company that owns the USFL, though how much the network will own wasn’t revealed.

There is plenty more information yet to be announced, including which cities the new USFL will play in, names and logos for the teams, any familiar names involved with the venture, and the league’s game schedules.

But Fox Sports will televise the USFL’s games. How much of the schedule will be broadcast on the main Fox network versus telecasts on FS1 and FS2 remains to be seen. Yet with Fox televising seven of The Spring League’s games this year — three of which have still to be broadcast, including the league’s championship game — it seems fair to guess that some of the USFL’s 2022 slate will be on over-the-air television.

It’s been headed this way for quite some time, with the owners of @TheSpringLeague acquiring the USFL trademarks.

The likelihood is that The Spring League goes back to being a scouting showcase/developmental operation with the USFL at the forefront on FOX. https://t.co/urgLTbBa78

Curiously, the CEO of The Spring League is also a co-founder of this USFL. Will Brian Woods oversee both the USFL and TSL? Will both leagues play at the same time and presumably compete for that spring football bandwidth?

The TSL has played from May through June, expanding to a six-game schedule this year. How many games the USFL will play hasn’t been announced, but the league will likely play in May and June, and perhaps into July.

Woods and Fox being involved with both leagues has already led to speculation that the USFL will get the TV time, media attention, and team logos and trademarks. Meanwhile, The Spring League would focus more on being a developmental venture for players looking to hone their skills for opportunities in the USFL and NFL.

The original USFL launched in 1983 with 12 teams, including the Philadelphia Stars, Tampa Bay Bandits, Memphis Showboats, New Jersey Generals, and Los Angeles Express. The Michigan Panthers won the league’s first championship in its inaugural season. The league also attracted top talent such as Herschel Walker, Doug Flutie, Reggie White, Steve Young, and Jim Kelly in its attempt to compete with the NFL.

But some teams eventually moved to different cities — Philadelphia to Baltimore, for instance — while several others fell into major debt and went out of business.

The fatal blow to the USFL was suffered when the league attempted to move its schedule from the spring to fall in order to directly take on the NFL. That failed effort was led by New Jersey Generals majority owner Donald Trump, a sequence of events detailed in Mike Tollin’s ESPN 30 for 30 documentary, “Small Potatoes: Who Killed the USFL?” and Jeff Pearlman’s 2018 book, Football For a Buck.

Can the USFL pull off a successful reboot, especially if the league stays in its spring football lane and offers an alternative to the NFL rather than aspire to be a rival?

The interest in spring football is arguable, considering the failures of the AAF and XFL. But other factors such as the COVID-19 pandemic played a role in those collapses, and there appears to be an appetite for some kind of football in the spring. If the money is lined up, the USFL already has a TV partner in Fox. As long as the league doesn’t try to throw too far down the field, perhaps there’s a chance at success here.