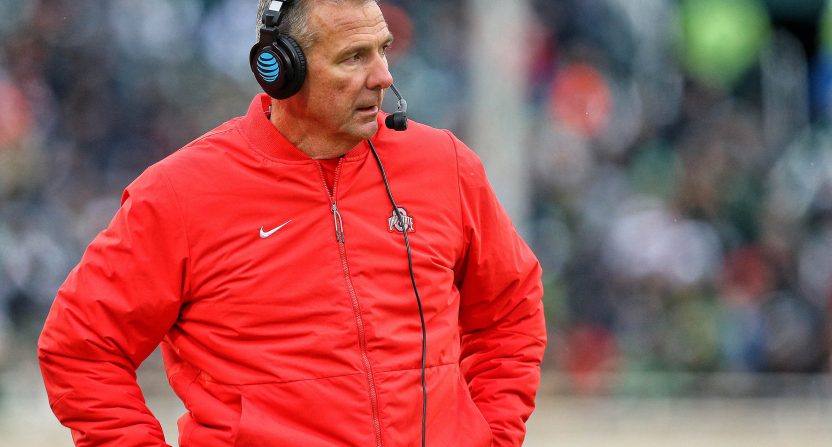 After weeks of rumors and reporting, Fox Sports Big Noon Kickoff analyst Urban Meyer will officially be the next head coach of the Jacksonville Jaguars.

Adam Schefter first reported that Meyer and the Jaguars were finalizing a deal, while also noting that Meyer was completely focused on only Jacksonville for an NFL opening. (The wisdom of which remains to be seen.)

At this time, it’s Jacksonville as the one and only for Urban Meyer. Jaguars’ owner Shad Khan’s process has led him to Meyer, and Meyer is highly interested, and the two sides are interested in trying to finalize a deal this week. https://t.co/gDpE46pyuG

Sources: Urban Meyer is finalizing a deal to become the next coach of the Jacksonville Jaguars. All signs point to a deal being done today.

Schefter pushed back a bit on the notion the deal was already done, but it’s pretty clear where things are headed at this point.

Source: Urban Meyer's deal with Jacksonville is close, not yet done, but is "trending that way." The two sides are meeting again today. The agreement could be done as early as today, but as of now, there is not one and no press conference planned. Yet.

Prior to his very well-received, possibly ratings-driving television work for Fox, Meyer obviously did a little coaching at the college level, winning national championships at Florida and Ohio State. That achievement shouldn’t be undersold; the list of coaches to do that includes just Meyer, Nick Saban, and Pop Warner. Meyer’s coaching career wasn’t without its own problems, though; he memorably left Florida citing his health and family, and then returned to coaching at Ohio State just a couple of years later.

Meyer “retired” from Ohio State, too, after the 2018 season that saw him suspended for three games to start the year for his role in the team’s response to assistant coach Zach Smith’s domestic violence allegations. After leaving coaching againeyer joined Fox Sports, working as a panelist on Fox’s upstart Big Noon Kickoff pregame show.

Meyer’s skills on the broadcasts were revelatory; here was one of the biggest names in college coaching, just out of the sport, offering detailed insight in an approachable way. There were many factors involved in Fox closing the gap to ESPN’s College GameDay, but Meyer absolutely became a draw, and Fox is going to struggle to replace him with someone combining both his name recognition and his actual abilities behind the desk.

The good news for Fox: they have some time to figure that out. And hey, based on Urban’s track record, they might not have to wait long before he’s available again!