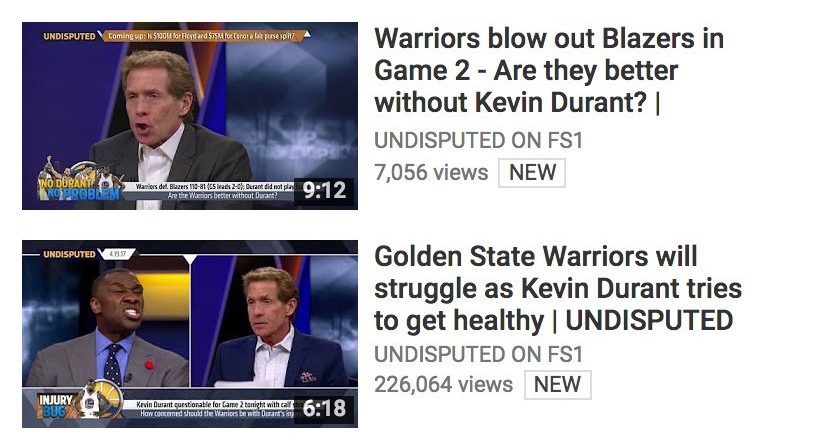 Titles and headlines are vitally important, especially in a social media age where people often react based solely off the title, and Fox Sports’ digital staff gave Skip Bayless’ critics a lot of ammunition Thursday with their Undisputed clip titles. The last clip they posted from Wednesday’s show was titled “Golden State Warriors will struggle as Kevin Durant tries to get healthy,” while their first clip from Thursday’s show was titled “Warriors blow out Blazers in Game 2 – Are they better without Kevin Durant?” That contrast led to a screenshot from Twitter user Bharath Ravindran that got a lot of attention:

Life comes at you fast. pic.twitter.com/Edgd4uW7p9

At first glance, that’s an easy contrast to blow up, and one more example of Fox Sports personalities being “entertaining, not correct.” If Bayless had really argued that Golden State would struggle without Durant Wednesday and then said they were better off without him Thursday, that would be ripe for full mockery. However, if you listen to the clips (the key part is near the start of each, if you don’t want to subject yourself to a full 15 minutes of Bayless and Shannon Sharpe,) his actual argument in both cases is reasonably similar: the Warriors will have some issues adjusting their play when Durant returns.

In the first clip, Bayless talks about Durant’s injury and says (0:44) “They looked better to me without Kevin Durant at the end of the year, and then he came back and they still looked pretty great with Kevin Durant. But chemistry will be an issue ongoing. You say it’s just some high school science class, I say you’re watching a chemistry experiment right before your very eyes because now it’s into the crucible of playoff games. We haven’t seen them play a close game yet. I wish [Jusuf] Nurkic could play for Portland, because then it would be a closer game. I’m just saying that going forward, Golden State is going to struggle as they try to get Kevin completely healthy and then reingratiate him in their chemistry or lack thereof in games. Because with him, they’re having trouble closing some games.”

Aside from Skip using “reingratiate” when he means “reintegrate,” there’s a minor point there. The Warriors have had to adjust their play with Durant in the lineup, and they have been a very good team without him. That doesn’t mean Bayless is right that they’re a better team without him, but it does mean that he isn’t necessarily arguing that the team will struggle without Durant, rather that they’ll struggle to adjust to him coming back. And that’s mostly what he says in the second clip, too (0:15):

“The Golden State Warriors are a very different team with and without Kevin Durant. To my eye, without Kevin Durant, they’re better on the court and on my TV screen. That’s all I know for sure, they’re just better. But clearly, on paper, to your point, ongoing point, they’re obviously better with what, one of the top-five players in the world? How could they not be better with one of the top five? Well, here’s why. His presence is just so huge that he changes everything on the court. With him, it becomes slowly but surely Kevin’s team. Without him, it goes back to being Steph’s team.”

Again, this doesn’t mean Bayless is right. While many basketball fans and analysts would agree that the Warriors do have to change their style with Durant in the lineup, most would say that the drawbacks of that are more than made up for by the benefits Durant provides. So there’s a strong case that this take from Bayless is both wrong and hot. But it’s not inconsistent. And that’s where better YouTube titling would have helped, or at least provided less ammunition to the critics.

No one’s saying it’s easy to encapsulate a whole nuanced argument in a short headline or tweet. It’s one of the biggest challenges in media today, and it shows up for everyone, not just Fox and not just Undisputed. But this one could have been done better, especially on the first clip (“Warriors will struggle to reintegrate Durant as he tries to get healthy,” perhaps?), as it’s not actually saying that they’ll struggle without Durant (which the title seems to imply). Bayless deserves most of the shots thrown his way, and criticism for his take here is probably deserved too. But he didn’t flip-flop on Durant in one day, despite the titles making it appear that way.