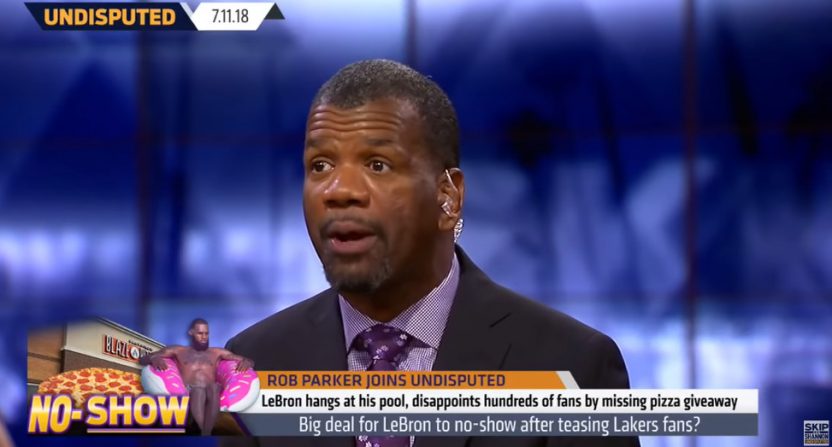 This week saw an unusual occurrence on FS1’s Undisputed, with the show taking some time to congratulate contributor Rob Parker on “being named journalist of the year by the National Association of Black Journalists.” The only problem? That award was announced in May, and it went to ESPN’s Jemele Hill. And the NABJ’s Salute To Excellence Awards release from this week mentions Hill, but not Parker, and even their detailed list of other nominees for those awards doesn’t include Parker. So what’s going on here? Well, after the Undisputed account tweeted their clip congratulating Parker, NABJ VP Marlon A. Walker tweeted that Parker had actually received an award from their sports task force (which is actually shown on the poster in the clip):

Congrats to @undisputed @RobParkerFS1 , my man on earning the @NABJSports Sam Lacy Pioneer Awards Journalists of the Year award powered by @MLB at our @NABJ convention in Detroit. #MeetMeinTheD https://t.co/gAVaiLZQ10

Of course, that full clip congratulating Parker also involves Joy Taylor saying “We want to congratulate our good friend Rob Parker on being named the journalist of the year by the National Association of Black Journalists. He’ll receive the award at their convention in early August.” So this wasn’t just a social media mistake. It’s one Fox made on air and then repeated on social media, and one they don’t appear to have corrected. And while it’s not the world’s worst mistake, it’s funny, especially considering that the award they say he got was already given to Hill, who works for a competing network and tends to have quite different takes from Parker.

Beyond that, many of us might quibble with any “journalist of the year” award going to Parker, a guy who famously had his contract not renewed by ESPN after wondering if Robert Griffin III was “a real brother or a cornball brother” for having a white fiancée (and apologized very, very late in the game, five days after ESPN suspended him). That was back in 2012, but his Fox work over the last few years has mostly involved absurdist takes like the city of Boston as “the B.C.O.A.T., Biggest Cheaters Of All Time,” Kyrie Irving as better than LeBron, LeBron as the “F.F.O.A.T, Finals Failure Of All Time” and “M.S.O.A.T., Most Sensitive Of All Time,” suggesting that Aaron Judge and Daryl Strawberry are amongst the top five sluggers of all time, and, this week, saying that LeBron can’t be the greatest basketball player ever because he didn’t show up at a pizza event. You can see Parker’s whole rant on that front here:

That doesn’t exactly seem like the world’s greatest journalism. But if that’s what the NABJ’s Sports Task Force wants to honor, that’s fine; it’s their award to hand out however they want. And yes, there isn’t a huge difference in words between “NABJ journalist of the year” and “NABJ Sports Task Force journalist of the year,” and it’s easy to see how this mistake was made. It’s not the world’s biggest deal, or the world’s biggest crisis. But it does produce a chuckle to see Undisputed overstate the level of award Parker got, especially considering how the award in question was actually given to Hill.