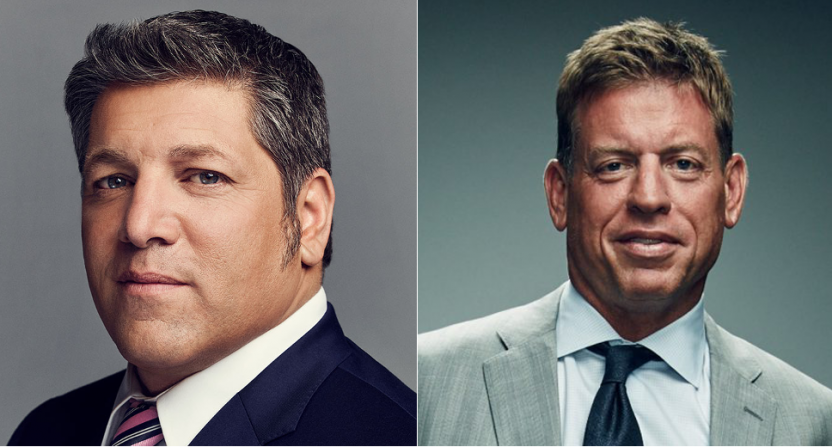 Tony Meola (seen at left above) is a former U.S. keeper who’s calling World Cup games for Fox alongside J.P. Dellacamera. Troy Aikman (seen at right above) is a former NFL quarterback and long-time NFL on Fox analyst who is not. But Meola’s voice sounds quite a bit like Aikman’s, and that’s led to a whole lot of tweets on the subject, especially during Tuesday’s Nigeria-Argentina match.

First, here’s an example of Meola’s commentary on Lionel Messi’s goal (starting at 0:35):

LIONEL MESSI GETS THE OPENER!

What a ball by Banega, what a touch and finish by Messi. Argentina lead Nigeria 1-0. pic.twitter.com/ONbGOjKVkg

Oh yeah, there’s a resemblance there. And Twitter has noticed:

The analyst for the Nigeria/Argentina match sounds like Troy Aikman. Expecting him to drop a “that’s exactly right Joe” any minute now.

I can’t stand the Fox soccer commentators because one of the dudes sounds like Troy Aikman and even though he’s not saying it, it sounds like every other word is Aaron Rodgers.

yo why troy aikman calling this Nigeria vs Argentina game?

Is this game in Buenos Aires? The supported are incredible.
Also, is Troy Aikman providing color commentary? #worldcup

Is Troy Aikman doing the World Cup games on FOX, it sure sounds like him. #wheresjoe

And this isn’t the first game where people have noticed the vocal resemblance. This has been a recurring theme throughout the World Cup:

Tony Meola sounds so much like Troy Aikman it’s eerie, calling the #WorldCup for FOX. Halfway waiting for Joe Buck to give us the Man of the Match.

I'd so much rather hear those guys' passionate call–even with a few hiccups like "handball" for throw in–than listen to bored Troy Aikman, er, Tony Meola.

Is that Really Tony Meola calling World Cup Games because it sounds a lot like Troy Aikman to me. Is she RIGHTTT?? (Sam Kinison Back To School Voice) pic.twitter.com/Vn9lqsLGqk

@MenInBlazers is it just me or does Tony Meola sound exactly like Troy Aikman?

Lukaku and the Belgium squad are a goal-scoring machine.
Also: Tony Meola sounds a lot like Troy Aikman.

Maybe Tony Meola sounds too much like Troy Aikman.

Meola is on one of the two Fox announcing teams that’s in Russia for the tournament, not calling matches from studios in L.A., so we’re pretty sure it’s actually him and not Aikman on these broadcasts. Or else this is a really elaborate ploy, involving him tweeting signs from St. Petersburg:

MD13-Arrived in St Petersburg (only one bag missing) no worries, who needs clothes on a day like this? 11hrs to game kickoff of #ARGvNIG Group D 2pmET Someone is going shopping (instead of sleeping!) #JPandTonyRoadShow @FOXSoccer pic.twitter.com/OX6ReP0wGw

Meanwhile, Aikman is Instagramming from a trip to Hawaii (and throwing in some Hawaii tourism links):

We’ve just spent an amazing 24 hours on the Big Island and have enjoyed every moment. I know some headlines have caused some to reconsider their plans but I encourage you to visit GoHawaii.com for the latest official information…come meet the people of the island and experience the aloha for yourself #exploreislandofhawaii

So, it seems likely this is Meola and not actually Aikman. But Fox should definitely take advantage of this vocal similarity at some point; Troy and “Troy” could make a pretty funny football-and-futbol video. And hey, if Aikman ever needs a Thursday night off, he now knows where to find a vocal doppelganger…