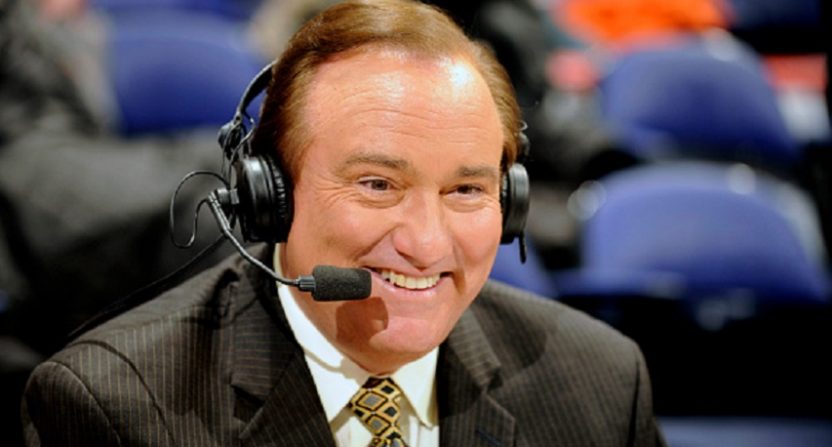 Tim Brando has found a home with Fox Sports and plans on sticking around for a while. As reported by Sporting News’ Michael McCarthy, the broadcaster has inked a multiyear contract extension with the network and envisions working there for the rest of his career.

Brando, 61, calls college football and basketball for Fox, where he’s been since 2014 following his departure from CBS Sports. He’d also like to call golf for the network, but doesn’t want to push it. As he told McCarthy, being too aggressive might have cost him at CBS.

Fox jumping into college football and basketball coverage and growing that part of the network’s sports programming made Brando a good fit. At the time, a former colleague inspired the sort of role he had in mind as he joined Fox.

“They said, ‘Where do you see yourself?’ I said, ‘If you’re growing your network, I’d like to hope you need an experienced guy, a veteran guy, a guy who’s been involved in college sports for 30 years.’ I always looked up to Verne (Lundquist of CBS). I said, ‘Let me be your Verne, let me be that guy.’ I’d like to think that was prophetic to some extent. This is proof that maybe they’re thinking that way.”

Brando presumably meant being a signature, established voice for college football and basketball when he referenced Verne Lundquist to the higher-ups at Fox Sports. But if he aspires to staying with the network through the end of his broadcasting career, that would certainly draw some parallels with Lundquist, who retired from calling college football for CBS following this past season. However, Lundquist still does college basketball and golf as he eases his workload.

In his interview with McCarthy, Brando said he sees himself working at Fox until he’s at least 65 (which indicates the length of that contract extension), which could be enough for him. (He’d have to put in some more time to keep pace with Lundquist, who stepped away from college football at 76.) That might give him some time to get the golf gig he seeks.

What’s most important is that Brando doesn’t want to go anyplace else — following a path that’s taken him from ESPN to TNT and SportSouth, then to CBS, before landing at Fox — before deciding to make his final call as a broadcaster.