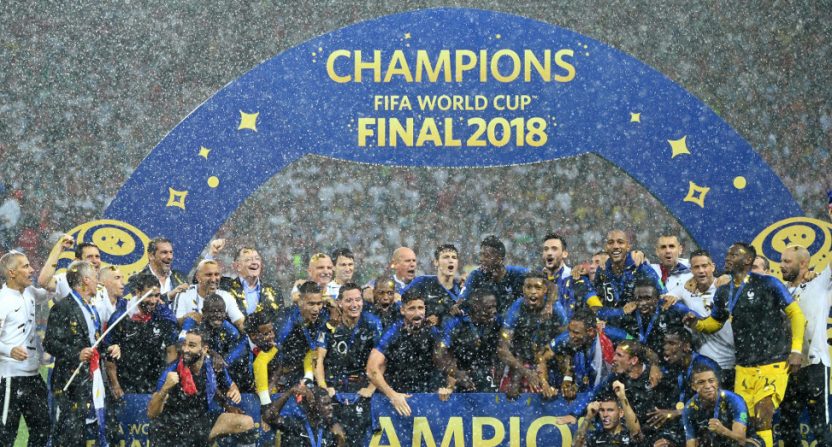 The time zone challenges of the World Cup in Russia have posed some ratings problems for Fox and led to plenty of press releases citing “Compared to an average of the last four World Cups” numbers, notable considering that those include the last World Cup with incredible time zone issues for North America (2002 in Japan and Korea). The one-match-a-day portion of the knockout stage has perhaps been even worse from a time perspective, with most games beginning at 10 a.m. or 11 a.m. Eastern. And that 2002 World Cup is a particularly important comparison for Sunday’s France-Croatia final, which as Paulsen writes at Sports Media Watch, was the lowest-rated since 2002, but also the first final that began before noon Eastern since 2002:

The France-Croatia FIFA World Cup Final earned an 8.3 overnight rating on FOX Sunday morning, down 14% from Germany-Argentina in 2014 (9.7) and down 3% from Spain-Netherlands in 2010 (8.6), both of which aired on ABC. Figures include pre-match coverage.

France’s win, which peaked at a 10.0, posted the lowest overnight for the World Cup Final since 2002 (Brazil-Germany: 4.1). Not coincidentally, it was the first final since 2002 to begin before Noon ET.

Overnights also trailed the two most recent Women’s World Cup finals, which featured the United States. The 2015 final, which also aired on FOX, had a 15.2 in primetime.

Given the 11 AM ET start, the presence of non-traditional finalist Croatia, and France’s comfortable margin of victory, FOX can be more-than-satisfied with a mere 3% drop from 2010 and 2006 (Italy-France: 8.6).

So, that doesn’t sound all that bad for Fox, even with a 14 percent decline from the last men’s World Cup. And it was much better than the 2002 final, which drew a 4.1 thanks largely to its 6:30 a.m. Eastern start. That fits with the larger story of the ratings being less bad relative to previous editions during the knockout stages (especially past the Round of 16, the furthest the U.S. team advanced in 2014), and with Fox pulling in ad revenue that’s expected to exceed the $187 million for ESPN/ABC in 2014 (even with the makegoods they’ve had to offer for low ratings).

And as per Ad Age’s Anthony Crupi, Fox was selling 30-second spots for the final for $750,000 each, a big jump over 2014’s $587,500 on ABC and the most expensive U.S. soccer buy ever. So they probably did all right here. Not as well as French broadcaster TV1, though, as noted by Deadline’s Peter White and Nancy Tartaglione:

The triumph averaged 19.3M with an 82% share across its 90-minutes in France, which was marginally up on its semi-final win over Belgium, which averaged 19.1M viewers and a 70.5% share. However, this does not take into account the millions watching in bars and town squares throughout the country. Overall, the tournament has been a winner for TF1, setting viewing records for the year throughout.

Of course, the best is still to come for Fox. Many expect that the 2022 World Cup might not be great, given the winter shift putting it up against the NFL, to say nothing of the time zone challenges with Qatar. But they managed to get the 2026 rights unopposed in exchange for that winter shift, and those shot up even further in value after the joint North American bid won. The expansion to 48 teams looks awfully good for Fox, too. So they’ll be doing real well off the World Cup in eight years.

But it’s impressive that Fox has still managed to make tons of money off this one and pull in significant numbers of viewers, despite the challenges of no U.S. presence and a suboptimal time zone. Their ratings for this tournament overall certainly aren’t spectacular, especially given the tournament-over-tournament declines, but it seems to have worked out okay for them. And these ratings for the final fit right into that picture.