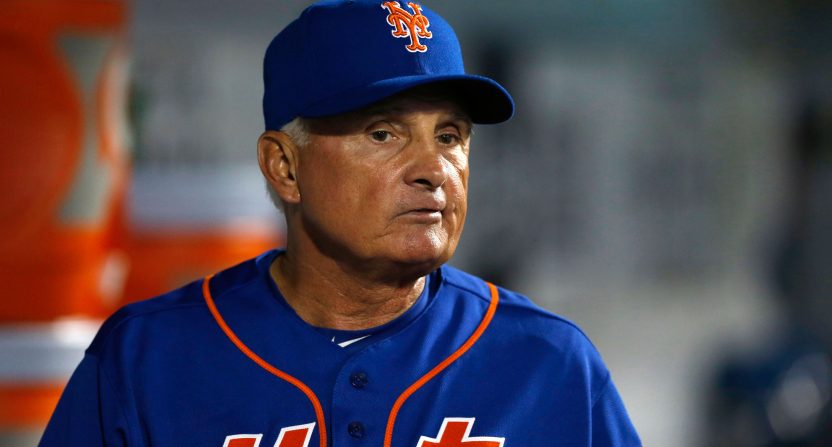 Though it’s not always true, usually the best analysts are those who were recently involved in the sport they’re being paid to analyze. Fox Sports is betting on that strategy again, reportedly hiring former Mets manager Terry Collins to serve as a studio analyst.

That’s according to Bob Raissman in the Daily News, who reports that Collins will make his debut next week:

The former Mets manager – and current special assistant to GM Brodie Van Wagenen – has signed a deal with Fox Sports to work on its baseball studio shows, according to industry sources. Collins is scheduled to debut Thursday (May 2) on FS1’s “MLB Whiparound” alongside host Kevin Burkhardt and analyst Frank Thomas.

Collins will continue to make select appearances during the season.

Collins was manager of the Mets until his retirement in 2017, after which he began serving in his current role as a special assistant to the general manager. Collins will continue in that role, which as Raissman notes, isn’t unusual in today’s world of broadcasting:

Although Collins still has a role with the team, he won’t be going to the microphone with any restraints, perceived or otherwise. Collins is not the first TV mouth to work for a team in an advisory capacity. In March, Van Wagenen hired Jessica Mendoza, one of ESPN’s Sunday Night Baseball analysts, to work as a baseball operations adviser. The “SNB” booth already had a Yankees “advisor,” Alex Rodriguez.

Collins has a reputation for speaking his mind, which could serve him well in the role. He’s also theoretically familiar with most of the league, and has spent more time around modern ballplayers than most analysts. That doesn’t mean Collins is going to be a rousing success; we have plenty of recent examples of players or coaches leaving the field for the booth and failing miserably.

The stakes for Collins are pretty low, however, and he could reasonably add some insight viewers wouldn’t get elsewhere. That’s the kind of thing studio shows like MLB Whiparound need, too.