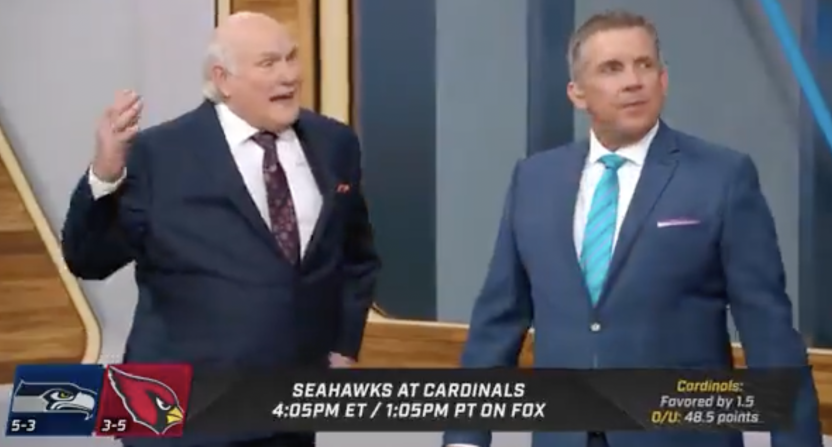 Terry Bradshaw has gotten himself in hot water in recent years with some of his comments. On Sunday, he caught a lot of people off guard, including his colleagues, with a joking mention of suicide during Fox NFL Sunday.

Towards the end of Sunday’s pregame show, the crew was discussing Arizona Cardinals quarterback Kyler Murray and whether or not the team can incorporate his mobility into the offense more. As Sean Payton was sharing his thoughts, Bradshaw chimed in to adamantly explain why the Cardinals won’t make their quarterback run more.

"I think if this kid ran five or six runs in a row, I think he'd commit suicide or something." – Terry Bradshaw, really losing the plot ? pic.twitter.com/G0y84MeiiY

Howie Long reacted strongly, saying “Whoa, whoa, whoa, that’s a little dark for this audience.” Meanwhile, Michael Strahan was left to look into the camera like he was a character in The Office while he processed how he felt about everything.

Obviously, Bradshaw was being flippant in regards to how Murray would actually feel, but given the seriousness around suicide discussions, that flippancy caused a lot of people to wonder if the 74-year-old should still be on television with this kind of platform. That’s just simply not the kind of topic you can or should casually joke about on a national television program.

Again, @NFLonFOX, help me please understand. Is there anyone that is saying this is not ok, or does Terry Bradshaw get the “oh that’s just how he is” pass?

Oh no. Terry Bradshaw. Oh no.

Bradshaw has put his foot in his mouth on more than one occasion in recent years. He has made some curious comments about Steelers coach Mike Tomlin, he apologized in 2019 after referring to Ken Jeong as “the little short guy from Japan,” and was called out for “creepy” comments towards Erin Andrews last year. Not to mention it’s clear to many viewers that his cognitive skills aren’t what they used to be.

The longtime Fox NFL Sunday host announced last month that he’d been battling cancer for a year but was now cancer-free.