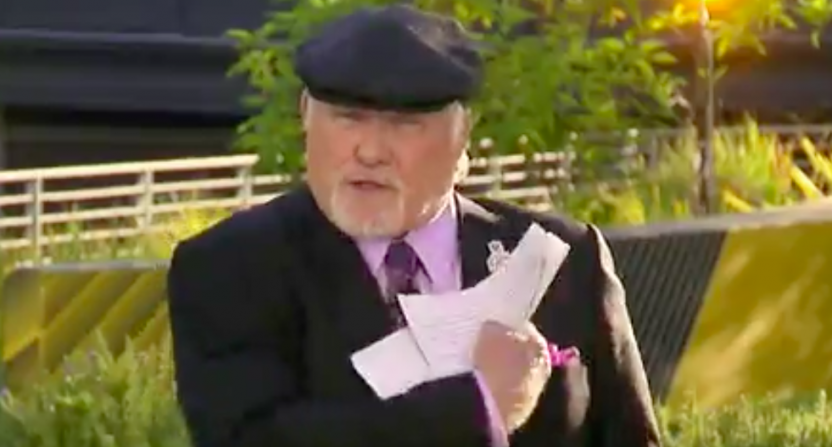 This week, of all weeks, it would be a good idea for people affiliated with the NFL to not objectify women on national television. And yet.

On Monday, Las Vegas Raiders coach Jon Gruden resigned after emails he sent to members of the Washington Football Team staff came to light. Along with racist, homophobic, and misogynistic language, the emails included photos of WFT cheerleaders from a partially nude photoshoot that they were reportedly forced to do in front of sponsors by then-general manager Bruce Allen. Since then, former cheerleaders have been looking for answers from the NFL and receiving none.

So while the NFL has effectively gone radio silent this week regarding issues of women’s safety and well-being, that didn’t prevent a textbook scenario of what so many women have been voicing their concern about from happening during the Thursday Night Football pre-game broadcast on Fox.

Eric Andrews, who was the victim in an infamous sexual assault case, sat down for a pre-recorded interview with Tampa Bay Buccaneers linebacker Devin White. The setting of the interview was inside a barn (White owns horses) and Andrews wore an outfit that fit the theme.

After the piece was aired, Andrews was on the big screen at the Fox pre-game set while the analysts stood around. Andrews posited a question about the age when each of them first got on a horse, which was met with a bit of awkward silence before Terry Bradshaw said “three.” The 73-year-old then immediately talking about Andrews’ outfit while also gesturing in a fairly weird way.

“You got your cowboy boots on. And your shirt. You’re lookin’ good. That was ni- I enjoyed that interview.”

Plenty of people on Twitter were quick to point out how creepy the whole thing felt.

This is why nothing will ever change with men in total control. Did anyone hear what Terry Bradshaw said to Erin Andrews? He went straight to how hot she looked in her cowboys boots while she was interviewing Devin White. He just said it out loud on National TV like it was okay.

Uh Terry Bradshaw just dished some sexual harassment towards Erin Andrews on TV…wtf. When are we going to get these idiots out of media/sports.

It wasn’t as creepy as Joe Namath’s infamous interview with Suzy Kolber but that’s probably because at least Andrews and Bradshaw were in separate locations. Thank goodness for that.

Just about any week, this would be a bad look for Fox and the NFL. But this week? It feels a bit like proof of what many people have been saying.