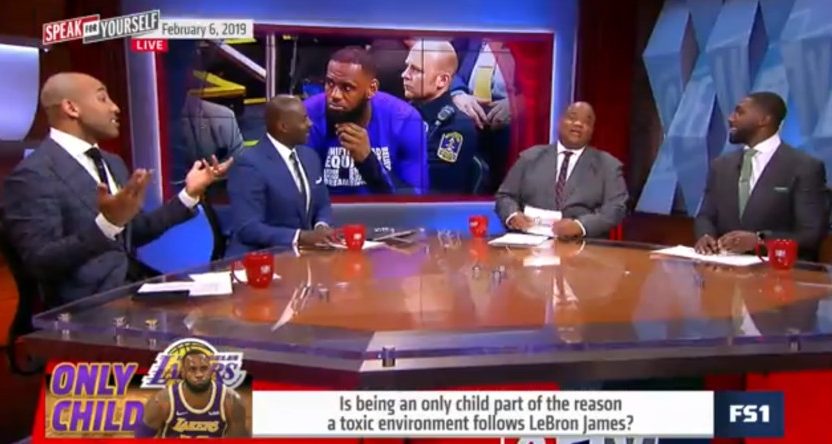 FS1’s Speak For Yourself, featuring Hot Take Hall of Famer Jason Whitlock, Marcellus Wiley (since he replaced Colin Cowherd), and whatever collection of FS1 NFL/NBA analysts or guest-appearing former players they have on a particular day, has always been known for some provocative takes, both aired (Ray Lewis saying Odell Beckham Jr. has “walked away from his religious values“, Cris Carter saying college players “signed up for the whole season,” etc) and unaired (Whitlock’s sketch featuring Christopher “Kid” Reid dressed as Colin Kaepernick). But the one they aired Wednesday was notable for its length (21 minutes, so 23 percent of the 90-minute show, and that’s without discounting the commercials), for its boldness, and for the reaction it got. The topic? “Being an only child has contributed to a toxic environment around LeBron James.” Robert Mays of The Ringer had a funny take on that graphic:

Just turned off the heat in my apartment. The flames coming off this take can warm an entire city block. pic.twitter.com/VL3rwFlqy6

What’s particularly great about the insanity of that take is that it just presumes “a toxic environment following LeBron James’ is an accepted fact, with only the origins of it left to be debated. But, uh, LeBron has three NBA titles, and most of the teams he’s been on have been pretty good and not particularly toxic! But Whitlock uses a regular-season blowout loss by the Lakers Tuesday night to conclude that things are “toxic,” and then starts his psychoanalysis. Here’s the key part of the Whitlock monologue (full thing availble here) that kicked off this discussion:

Ah, so Tom Brady, Michael Jordan and Magic Johnson are great…because they had siblings? And saying “in this new anything-goes society we’ve constructed, it’s impolite to point out that traditional families build better products and prodigies” is a hell of a take. Whitlock goes on to say that he was raised by a single mom after his parents’ divorce, but that doesn’t give him free range to lob these kinds of insults without criticism. (And really, he’s not a great product or prodigy himself, but that’s not about his family status growing up.) But can we also point out that Whitlock is referencing rapper J. Cole just a couple of days after he dropped this nuclear-level take on rappers?

At any rate, this led into a panel discussion (with Wiley, Greg Jennings, and Dahntay Jones), and it started with Wiley completely shooting Whitlock down:

“Marcellus, I’m going to throw this grenade in your lap first. Is LeBron being an only child in his upbringing part of the reason dysfunction has followed him?” “Absolutely not. I was an only child.”

This conversation still somehow went on for 18 minutes, and it ended with everyone arguing and no one agreeing with Whitlock:

That’s some damn good use of national programming time FS1. Nothing like spending 21 minutes arguing about LeBron not having siblings.