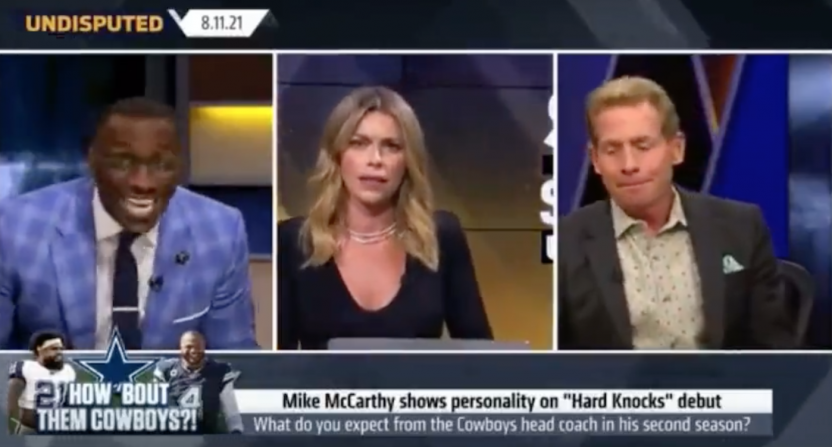 Update:  No apology or commentary on the controversy was provided on Thursday’s show.

We watched all of today's Undisputed to see if Skip Bayless would address the controversy from his comments yesterday on Mike McCarthy's weight.

Instead half of the show was devoted to Dak Prescott and LeBron James.

Business as usual at FS1! pic.twitter.com/U1zzBWVy8w

With Hard Knocks debuting last night on HBO, and featuring the Dallas Cowboys, you had to know Undisputed and Skip Bayless were going to all out talking about the show. For those unfamiliar, the Cowboys are Bayless’s favorite team and because of this, Undisputed has a very unhealthy obsession with the Cowboys. Back in March, the show spent 93% of a whole episode talking about Dak Prescott’s extension, leaving only eight minutes to discuss all other topics.

After a few different topics on Wednesday’s show, things seemed to be winding down as the pair seemingly exhausted all possible angles discussing the Cowboys. But right as the show was heading into a break, Bayless unleashed an unbelievable, all-time moronic take when discussing Mike McCarthy’s head coaching abilities.

“This is just personal preference on my part. I’m not taking a shot at him about this, but he’s a little heavy.  And I wouldn’t want my head coach in the National Football League to not look the part at all because you got to stay in some semblance of condition to show you know who you are and have some confidence in yourself, right? He was just unimpressive across the board. I’m giving him no checkmarks.”

Well, that’s very stupid for several reasons, which we’ll get to shortly.

While Shannon Sharpe was too busy chuckling, nodding, and ignoring this flurry of idiocy from Bayless, Jenny Taft entered the conversation not too long after, and was quick to push back against Bayless, which he most certainly did not appreciate.

Taft: I don’t know if I think that’s a fair shot for Mike McCarthy and I’m going to leave it at that.

Bayless: (sarcastically) Thanks Jenny. I appreciate that

Bayless:  Well…yeah… I don’t think that is a fair shot.

Taft: Is everyone who is a good coach as fit as you Skip?

Bayless:  I said it was a personal preference . I wouldn’t want him to be my head coach.

Taft: I’ve actually had plenty of coaches that have not had the perfect ideal physique including my college coach. So I don’t think that’s a fair shot.

There are three parts of all of this that are interesting.

Bayless’s dumb take on McCarthy’s weight is just flat out wrong. McCarthy has won a Super Bowl. So has Andy Reid. There are plenty of Super Bowl winning head coaches who might be buying plus size clothes, including Bill Parcells, Mike Holmgren, and John Madden.

It’s just a flimsy take with no merit. Bayless, a known fitness freak, is seemingly one of those people who just sees fitness as an ideology that must be embraced by everyone in power. Sure, that may sound good to Skip and other people who think everyone needs to be converted to their way of thinking, but that’s just not how it works. It’s a stupid, judgmental comment and it’s hurtful for those who struggle with their body image.

That’s why Taft’s pushback is so impressive and should be commended. Obviously, Sharpe wasn’t going to do anything other than laughing and avoiding the noxious take. If you recall, it was Taft who voiced some discomfort when the show called Julio Jones on live TV to inquire about trade rumors without explaining he was on the show live. She’s clearly someone who knows better and will speak up when the show drifts into places it definitely should not be going.

Taft pushed back, and pushed back hard, despite Bayless’s sarcasm and not so subtle rudeness. When challenged, he had nothing of substance to offer when called on his bullshit other than dismissiveness and disdain. That’s Skip Bayless in a nutshell, and decades of being unimpeachable has only made him more unbearable and out of touch.

“I am allowed to have an opinion” Jenny Taft
Stand your ground. ????
Why is he still allowed on TV always being mean? @JennyTaft https://t.co/KZJPCkN1cE

If you’re thinking that perhaps Bayless might offer up some type of apology, given how these comments have gone over, we’ve been down this road before and we know how it goes.

Last month, Stephen A Smith devoted nearly half an episode of First Take to make amends for a series of racially insensitive comments relating to Shohei Ohtani. Smith doubled down on his comments a few times on social media before the suits at ESPN and Disney kicked into crisis management mode and coached Smith on how to best extinguish the growing controversy.

Bayless was in a similar situation this past fall after making some dismissive and hurtful comments about mental health that riled everyone up. Fox and Bayless did not opt for the damage control route and rather thumbed their collective noses at the controversy. Bayless was given a new extension with Fox days later. That’s the difference of standards between FS1 and ESPN.

Bayless just doesn’t have the sense to avoid such obvious treacherous topics like body image and mental health, nor the perspective or nuance to wade into those murky waters.  It’s a feature, not a bug, of having him own TV for two and a half hours a day. He doesn’t care and Fox doesn’t care. However, Jenny Taft did care and should be commended, although you have to wonder if that helps or hurts her stature at the network.

Unfortunately, Bayless will still be on Fox for years, simply because he makes the network money. One wonders if the network could have found similar success had they listened to the words of one of their own.

“I believe success is achieved by acquiring and developing talented, respected and credible individuals, none of which applies to Skip Bayless.”- Troy Aikman