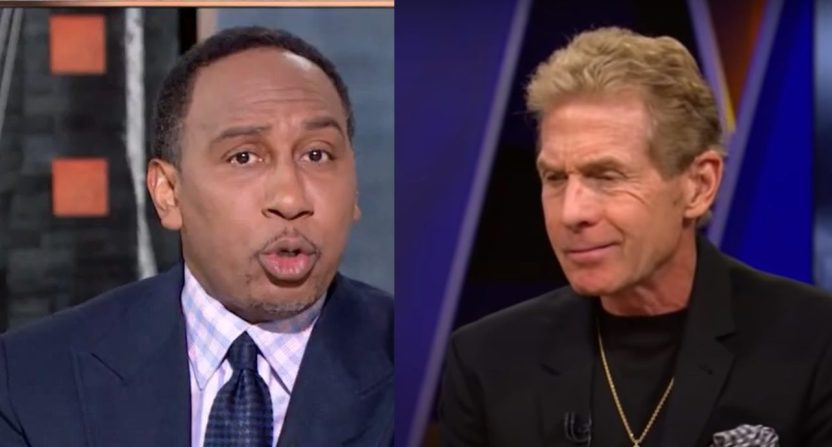 Everyone’s dying to know, would Skip Bayless rather debate his former TV partner Stephen A. Smith or his current co-host Shannon Sharpe?

This week, Bayless and Sharpe had one of the biggest fights in their six years together on FS1’s Undisputed. It was at least one of their most attention-grabbing fights, garnering more than 16 million views on social media as both hosts accused each other of getting personal with insults and disrespect.

During the latest episode of The Skip Bayless Show, the brash sports talk performer offered some analysis of his most recent bout with Sharpe.

“My man Shannon Sharpe and I did get into it the other day on Undisputed live, over, of course, Tom Brady,” Bayless admitted. “Brothers fight. Shannon and I compete hard on Undisputed…I have the highest regard for Shannon Sharpe because he prepares and he competes so hard.”

Many people who watched the fight on Twitter felt Bayless owed Sharpe an apology after he seemingly disrespected the Pro Football Hall-of-Famer’s NFL career and later scorned his partner for removing his glasses in disgust. Bayless didn’t apologize, but expressing his admiration for Sharpe was probably his way of offering a truce.

“He’s my toughest opponent ever, it’s not even close,” Bayless continued to speak highly of Sharpe.

But as Bayless celebrated Sharpe, I couldn’t help but notice the subtle dig at Stephen A. Smith.

Bayless believes Sharpe is his toughest opponent ever, OK. But his former sparring partner at First Take isn’t even close? During the viral portion of the Bayless vs Sharpe fight over Brady, neither host really said anything particularly thought-provoking. It was loud, it was personal, it was attention-grabbing and it made for a great social media clip, although one that Fox Sports failed to capitalize on, but there really wasn’t any great points being made in the argument.

And how can Bayless consider Sharpe his toughest opponent when Smith claims he never lost a debate? Someone’s lying here.

The debate styles between both pairings are different. Sharpe is louder, and he has more sports credibility, which probably even makes him more apt to trip Bayless up. But Smith is the better performer. During their tenure on First Take, Smith and Bayless were almost like improvers attempting to outperform the other more than they were trying to win the “debate.” But even six years later, giving in and calling Smith a worthy debate partner might be too much of a concession for Bayless to handle.