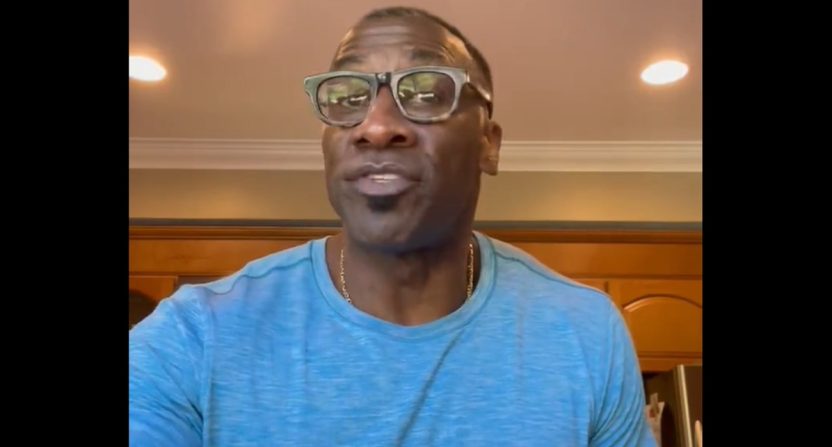 On a recent episode of Michelle Beadle’s What Did I Miss? podcast, Jefferson made it clear that he has no desire to be like Sharpe, Skip Bayless or Stephen A. Smith in the media, and prefers to stick to basketball. Last week, Sharpe responded on Fox Sports’ Undisputed by putting Jefferson on blast, claiming the ESPN analyst is “lazy” for not aspiring to be a more well-rounded broadcaster.

Naturally, Jefferson, who played 17 seasons in the NBA and has since built a successful media career post-retirement, took exception with Sharpe’s harsh criticism.

“As long as you’re on god’s green earth, Shannon Sharpe, don’t you ever refer to me as lazy,” Jefferson ranted in a video he posted on TikTok. “Don’t you ever refer to my approach as lazy, it couldn’t be any further from the truth. I said that people on those shows often times talk in broad generalities because they’re covering so many sports.

“So what did he do to argue back with me? HE USED A BROAD GENERALITY,” Jefferson continued. “He said that I’m being lazy. There’s not a person in this industry since I have retired that would ever refer to my work ethic as being lazy. So as long as you live, don’t ever do that again or this conversation is gonna be much different.”

Sharpe saw Jefferson’s response over the weekend and posted an apology video on Twitter. “Richard Jefferson’s not lazy, I was lazy in my assessment of what Richard Jefferson said,” Sharpe explained. “I want to apologize, I come to you as a man, Rich, and apologize to you for my take on what you said.”

Jefferson later tweeted his acceptance of Sharpe’s apology, adding that this is why he respects the Fox Sports host. Thank goodness.

This why is I respect @ShannonSharpe! It’s ok for us to disagree and go back and forth. He is one of the hardest working people in this industry. My goals might be different but him and his platform are opening up so many doors for others. Thank you for the clarification UNC?? https://t.co/MaHRz8oJPd

The silly new media vs old media debate being pushed by Draymond Green, JJ Redick and others has everyone on edge and ready to maliciously defend their corner in the industry. In reality, though, the media world will always find room for any person who is interesting or entertaining, regardless of whether they went to journalism school, played a sport professionally, have an independent podcast, or have a national show on ESPN or Fox.