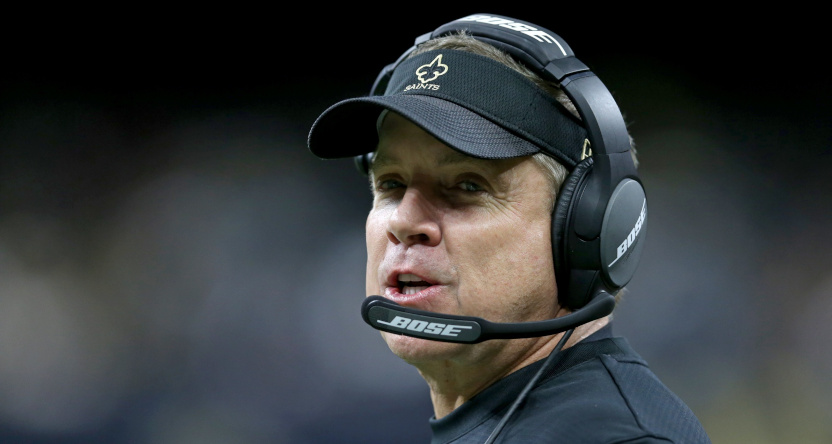 There are some potential broadcasting moves ahead this offseason, and one key element there is Amazon taking over Thursday Night Football and looking to add their own voices. There have been various reports on who that might be, including one from Michael McCarthy of Front Office Sports last November that Amazon was targeting Fox analyst Troy Aikman and NBC play-by-play announcer Al Michaels, and Aikman telling McCarthy earlier this month he might wind up with Amazon (either in addition to or instead of a Fox role). McCarthy has now added that if Aikman does leave Fox, they might look to a surprising figure to fill his spot on their top NFL team alongside Joe Buck: current New Orleans Saints coach Sean Payton.

Payton (seen above during a Jan. 2 game) has been the subject of some quite unusual conversations for a still-under-contract head coach this past week, so it’s worth running through those before we get into this latest report. First, on the January 17 episode of The GM Shuffle podcast with Michael Lombardi and Adnan Virk, Lombardi brought up the idea of Payton leaving to coach the Dallas Cowboys (who still currently have their own under-contract head coach in Mike McCarthy, albeit someone whose seat may be heating up following their playoff loss). A transcription, via Heavy.com:

“Now, there has always been a linkage between the Dallas Cowboys and Sean Payton. The Jones family loves Sean, Sean loves Dallas, Sean loves the Jones [family]. There’s a mutual, mutual love affair going on there. Can Sean get out of [his deal]? He has one year left on his contract with the New Orleans Saints. Can he get out of that? Is he allowed to get out of that? Could he just go walk over to Dallas?”

“I don’t know, I’m not trying to spread rumors. I just know that there’s a lot of conversation that Sean might take a year off because it’s the last year of his deal. I don’t know if he wants another contract. He’s certainly entitled to one.”

It’s rare, but not unknown for under-contract coaches to wind up with other teams in exchange for compensation; two prominent cases are Bill Parcells heading from the Patriots to the Jets and Jon Gruden heading from the Raiders to the Buccaneers. And Mike Florio of Pro Football Talk has said that the Cowboys tried to get Payton from the Saints a few years ago. The problem with Lombardi’s specific initial report, though, is that he started with “he has one year left on his contract,” and that’s not true; Fox’s Jay Glazer reported in 2019 that Payton had signed a five-year extension (however, it’s unclear if  that meant “five years from the date of that report,” which would be through 2024, or five years from the date of the expiration of Payton’s previous contract, which would be through 2026).

However, that doesn’t mean that Payton can’t leave early.  It just means that he would be giving up more guaranteed money to do so. And Ian Rapoport of NFL Network reported Sunday that Payton has not yet confirmed he’s returning to the Saints next year, and that he could retire for a year or more to recharge. Rapoport notes that Bruce Arians did that with Arizona, then came out of retirement a year later to coach Tampa Bay, with the Buccaneers agreeing to send the Cardinals a compensation package that included a sixth-round pick (as Arians was still under contract with them).  Here’s more from Rapoport’s piece, which says that Payton is under contract through 2024 with at least $45 million guaranteed remaining on that deal:

Sources say that Payton, who has three years left on his contract, has not committed to returning to coach for another season in New Orleans. He has not yet informed the organization for whom he’s coached since 2006 that he will definitely return.

…It would be highly unlikely for Payton to coach another team in 2022, sources say. Rather, this would be a mini-retirement to recharge for a year after a season several people close to him described as incredibly challenging and difficult.

In this scenario, the Payton era likely would be over in New Orleans. If he were to return to coaching, it’s expected it would be with another organization, sources say.

…Prior to the end of the 2021 season, sources say Payton was approached by at least one TV network about working in media, and that appears to be a possibility, as well.

In a NFL Network TV hit on this Sunday, Rapoport further discussed those possibilities of Payton remaining in New Orleans, retiring, or taking a media job:

From @NFLGameDay: #Saints coach Sean Payton has not committed to returning for 2022. Story: https://t.co/CeJK9tI5Te and video ?????? pic.twitter.com/M8HM8k39pK

So that’s the context to McCarthy’s report; there have been these circulating rumors of Payton perhaps leaving the Saints, and the idea of him taking a media role with a network was mentioned by Rapoport. McCarthy’s piece is notable for confirming that Fox has strong interest in Payton, including a “top of their list” quote:

Payton has not committed to returning to the Saints for the 2022 season, according to Ian Rapoport of NFL Network. The Super Bowl-winning coach is at the top of Fox’s hit list, said sources.

None of that’s clear that Payton is actually leaving the Saints. But it is interesting to hear all these discussions around him, and particularly to hear reports saying Fox has strong interest on the TV side. And it’s notable that this is specifically about him sliding immediately into the top booth with Buck if Aikman leaves; it’s risky to put a rookie analyst in that kind of role (it didn’t work with Jason Witten, and it’s notable that even a more gradual slide towards that for Drew Brees has seen some criticism), but it has paid off in some cases (as with Tony Romo), and it might be needed for the kind of money Fox would probably have to pay to bring in someone like Payton who was already making so much money coaching. We’ll see what happens.