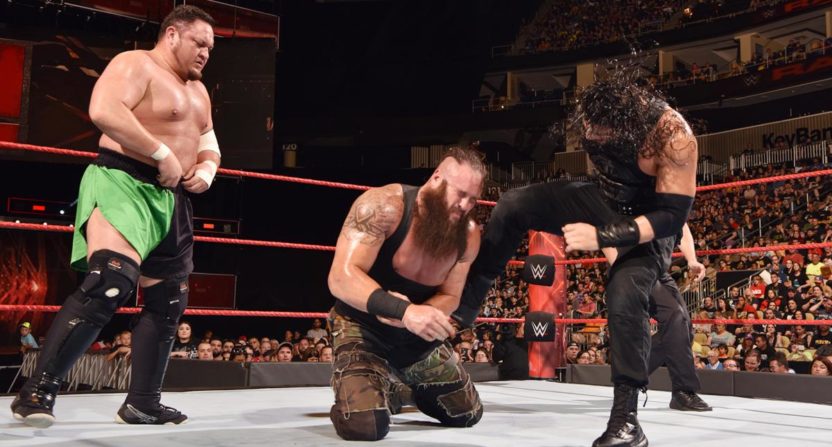 Last week, Fox announced it had acquired rights to WWE SmackDown Live, prying the weekly show from longtime partner NBCUniversal. Now, some details have emerged about how the network pulled it off.

According to The Hollywood Reporter, Fox brass won over WWE in a meeting at Fox headquarters attended by WWE executive Stephanie McMahon, her husband Triple H and several other WWE representatives on one side of the table; and Fox Networks CEO Peter Rice, Fox Sports executives Eric Shanks and Larry Jones, and Fox head honcho Rupert Murdoch on the other. Fox reportedly secured the deal with an offer of $1.025 billion over five years, a jab at NBCU’s commitment to pro wrestling and a promise to fully embrace WWE through promos and a weekly studio show on FS1.

The deal first sparked into life when Rice phoned Khan (repping WWE) weeks earlier and asked to meet immediately should NBCU not exercise an option to retain SmackDown, which averages 2.6 million viewers a week on USA. NBCU had the right to match any offer of $200 million or less per year, but decided not to exercise its option on SmackDown and focus instead on keeping Raw, which averages 3 million viewers and features A-list superstars including John Cena. Fox came in with $205 million, but the company was offering more than cash. The elder Murdoch insisted NBCU was “embarrassed by your product.” Fox, he said, would fully embrace WWE, with SmackDown promos airing across sports programming every night of the week, along with a weekly studio show on FS1. More than that, the deal, Lachlan Murdoch told McMahon during a private call at the end of the meeting, would herald the marriage of the Murdochs and the McMahons, rebel outsiders who had built media empires. (McMahon’s father, Vince, took over WWE from his father in the ’80s.)

As has been widely pointed out, WWE was a natural fit for Fox given its ongoing shift away from sitcoms and dramas and toward sports and other live events. Whereas NBC would have likely been hesitant to air SmackDown on its main network and build an entire studio show around WWE, the “New Fox” was apparently happy to do so.

Only days after Fox announced its new partnership with WWE, ESPN revealed that it had outbid Fox for rights to the full UFC package, meaning Fox will trade one combat sport for another. And although UFC delivered strong ratings over seven years on Fox, there’s much reason to believe the network is better off with WWE. As our Andrew Bucholtz wrote last week:

I think the deals with WWE seem like the better investment right now. WWE has been pulling pretty good ratings for RAW and Smackdown, often beating even (early-round) NBA playoff games, and even their low recent numbers are around 2.7 million viewers (RAW)/2.4 million viewers (Smackdown). By contrast, some of the best recent UFC Fight Night ratings have still been around only 870,000 or 956,000 viewers.

I think the two-network approach with WWE is also going to work out well for everyone involved. Fox and USA (and maybe USA parent company Comcast or sister company NBC) can each focus on promoting their show, and there’s maybe more incentive to promote it when there’s another WWE show out there that’s not on your network. Having Fox swoop in and put Smackdown on primetime broadcast TV (albeit on Friday nights, but still) should lead to a further audience bump, and having multiple networks with reasons to promote your sport can be a good thing, as we’ve seen with sports like the NFL and the NBA. And splitting up RAW and Smackdown allows both USA and Fox to get some wrestling content, and allows WWE to make money from both of them (and likely more than they would have if they’d kept the two shows together).

That assessment seems to be backed up by a quote in the Hollywood Reporter piece from an anonymous ex-Fox staffer.

“We could not sell UFC” at Fox, says a former staffer. “And wrestling is family friendly. If you have wrestling you can find cash. I think it’s a big win for Fox; it’s a great trade-off.”

SmackDown will move to Fox in October 2019, airing Friday nights on the main broadcast network. There is no word yet on Fox’s specific plans for the adjoining studio show on FS1.