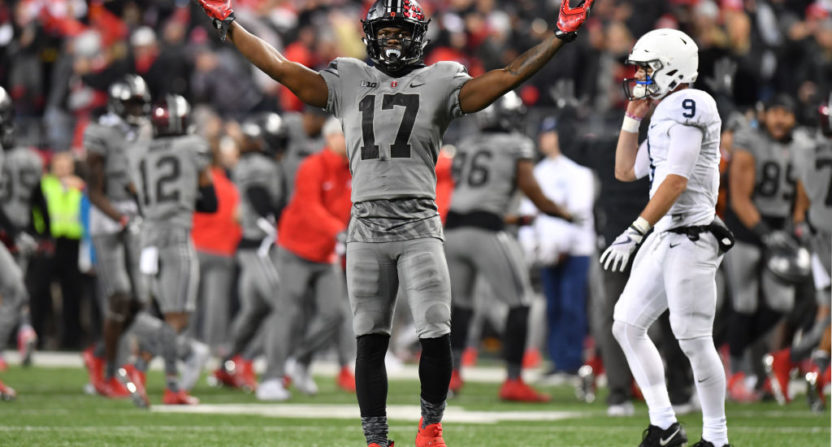 The then-No. 6 Ohio State Buckeyes boosted their College Football Playoff hopes dramatically with Saturday’s 39-38 comeback win over the then-No. 2 Penn State Nittany Lions, but Fox might have been the even-bigger winner.

As per Sports Media Watch, Fox’s broadcast of the game drew an incredible 6.4 overnight rating, which made a lot of history for them:

The Buckeyes’ comeback win, which peaked at a 9.0 from 7-7:15 PM ET, scored the second-highest college football overnight of the season behind Alabama-Florida State on ABC in week one (7.3).

Compared to the teams’ meeting last year, which aired opposite the Cubs clinching their first National League pennant since 1945, overnights increased 52% from a 4.5.

As goes without saying, the 6.4 overnight was the highest of the day — cruising past the second-place mark of 2.5 for Oklahoma State-West Virginia on ABC. This weekend marked just the second time FOX has topped the charts on any college football weekend.

The reason it’s the highest regular-season game but the second-highest non-bowl game is because of the Big Ten Championship Game, also televised on Fox since its 2011 inception. And even that game’s only passed a 6.4 overnight once; as per Sports Media Watch data, it pulled a 2.9 in 2012 for Wisconsin-Nebraska, a 7.9 in 2013 for Michigan State-Ohio State,  a 6.1 in 2014 for Wisconsin-Ohio State, a 5.7 in 2015 for Iowa-Michigan State, and a 5.3 in 2016 for Penn State-Wisconsin. So this beat every non-bowl Fox game except that 2013 Big Ten Championship, which also involved Ohio State.

So, the much-vaunted “Greatest Weekend Ever” for Fox Sports at least partly lived up to the billing. (The World Series numbers were impressive too, even beating Sunday Night Football.) And there’s a further potential benefit for Fox. The Buckeyes’ win improved their record to 7-1 and vaulted them to No. 3 in the AP and coaches’ polls, and they’ll be in strong contention for a playoff berth. Presuming they can survive the next three weeks against Iowa, Michigan State, and Illinois  (Michigan State is the only one of those teams currently ranked, sitting at #24 in the AP poll but outside the coaches’ poll), that could create even more anticipation for Ohio State-Michigan on Nov. 25, and that game will be airing on Fox this year after a long run on ABC.

If the Buckeyes are highly-ranked heading into that game, they could be a big draw, and the Wolverines might draw well too; they’re currently 6-2 and unranked by the AP (but #24 in the coaches’ poll), and their next two games against unranked Minnesota and Maryland aren’t that exciting, but they’ll play Wisconsin (currently 8-0 and #4 in both polls) Nov. 18. A Michigan win in that game could set up a great Wolverines-Buckeyes matchup. Keep in mind that Ohio State-Michigan’s double-overtime duel last year drew a 10.4 overnight for ABC; the Buckeyes and Wolverines were #2 and #3 respectively in the College Football Playoff ratings heading into that one (and #1 and #2 in the AP poll when they met in 2006, which drew a 13.0).

It seems unlikely we’ll see a clash with both teams ranked quite as high as either of those matchups, and thus the ratings might not hit the 10.4 level. But if both teams are doing well, those ratings will be very good indeed, especially given the size of their respective fanbases. Getting rights to Ohio State-Michigan was a big reason why Fox paid the extra $50 million or so for Tier 1 Big Ten rights compared to ESPN (they show a similar amount of content, but Fox gets more priority in picking games), and that may prove to be a smart move indeed. It’s also an interesting part of the college football broadcasting landscape: ESPN far outweighs Fox in numbers of games shown, but Fox is getting some very big games indeed. Ohio State-Penn State paid off well for them, and Ohio State-Michigan might do even better.