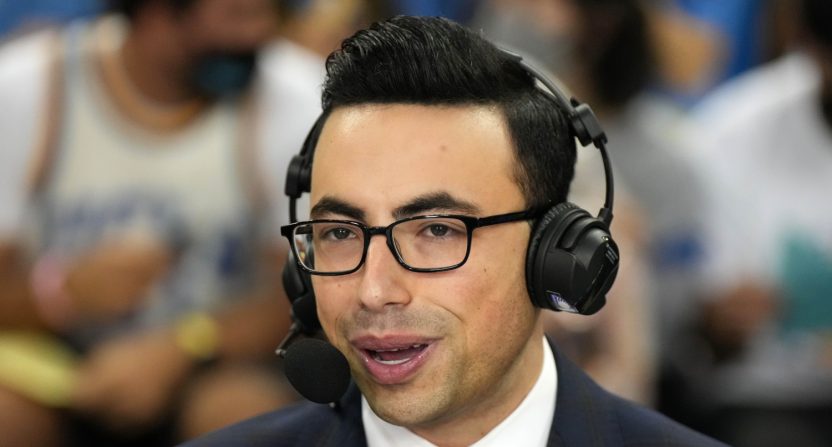 Famed announcer Ian Eagle‘s son Noah is picking up more and more prominent assignments himself. The 25-year-old younger Eagle has been doing play-by-play for a number of years, including calling a Syracuse road basketball game for local radio in 2018 while his father called the game for CBS, calling Los Angeles Clippers games for radio since 2019, calling Nickelodeon alternate NFL broadcasts the last two seasons,  calling college football for CBS last year, and calling college football and basketball for Fox this year. (He’s seen above calling a Washington–UCLA game for FS1 in February.) Now, as Andrew Marchand of The New York Post reported Thursday, Eagle is set to call his first NFL on Fox game this weekend, broadcasting 49ers–Falcons:

Noah Eagle will be on the call for his first NFL game on Fox's 49ers-Falcons.

Noah's father, Ian, will be on the call for Giants-Ravens on CBS.

Noah, 25, has been excellent on college football, first for CBS and now Fox. pic.twitter.com/U29gq3gsAO

The younger Eagle (seen at right with his father when they were will be working alongside Mark Schlereth and Kristina Pink there. That’s usually Adam Amin’s spot, but the NFL on Fox broadcaster lineup is a bit shuffled this week thanks to their National League Division Series coverage. Amin is calling the Dodgers–Padres series (alongside AJ Pierzynski and Tom Verducci), and that series (currently tied at one game apiece) is going to at least a fourth game, which will take place at 9:37 p.m. Eastern Saturday.

Thus, it would have been awfully tough to get Amin to Atlanta for a 1 p.m. ET kick the next day. And that’s before any consideration of a possible Dodgers-Padres fifth game (which would be at 9:07 p.m. Sunday evening if it’s needed). It makes much more sense to bring in a backup. And Eagle has been doing a solid job on college football for Fox (including calling last night’s Baylor–West Virginia game alongside Mark Helfrich), and has NFL experience from those Nickelodeon games, so he feels like a reasonable pick here. We’ll see how he does with a NFL main broadcast assignment.

This isn’t the only change on the NFL on Fox Sunday thanks to NLDS coverage. Joe Davis is calling the Braves–Phillies NLDS for Fox (alongside John Smoltz and Ken Rosenthal), and that’s going to at least a game four Saturday. That means Brandon Gaudin is going to tag in for Davis with Davis’ usual NFL broadcast team of Daryl Johnston and Pam Oliver. That team will call Bucs–Steelers Sunday at 1 p.m. ET. As per JP Kirby of 506 Sports, both of these games are going to relatively small areas of the country, with Fox’s widest-distributed game being Jets–Packers (called by Kevin Burkhardt, Greg Olsen, Erin Andrews and Tom Rinaldi).