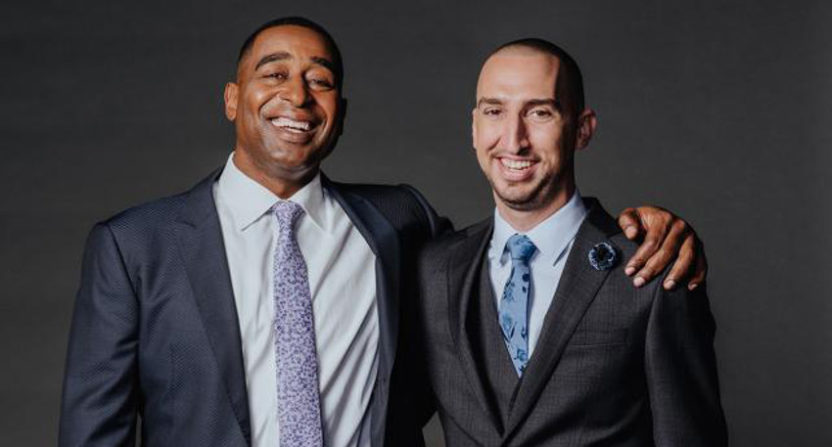 FS1 is finally getting its long-awaited morning show, and a couple of familiar names will be involved. The new show, which will air weekdays from 6 a.m. to 9:30 a.m. Eastern, be based in New York, and debut Sept. 5, is called First Things First with Cris Carter and Nick Wright. Former Houston radio host Wright, who joined Fox in March 2016, but has mostly served as a guest and fill-in host for Colin Cowherd so far, while former NFL star Carter officially joined Fox in December after ESPN parted ways with him earlier last year, but has mostly been a guest on debate shows Undisputed and Speak For Yourself so far. Here’s more from Anthony Cruipi of Advertising Age on some of the banter and chemistry the two showed off during presentations to advertisers and media buyers ahead of Fox’s upfronts next week:

If the success of “First Things First” will depend on the chemistry between its hosts — NFL Hall of Famer Carter previously served as an analyst on ESPN’s “Monday Night Football” and Wright is a former radio jock and a frequent fill-in mic on FS1’s “The Herd with Colin Cowherd” — the early signs are encouraging. Horowitz had the pair sit in for Cowherd during the post-Christmas week of broadcasts, but perhaps the most crucial test of their abilities to play off one another came during the network’s recent barnstorming tour of New York’s top media agencies.

Carter and Wright were particularly animated during FS1’s April 12 presentation to GroupM. After screening a sizzle reel that included a snippet of Wright attempting to pull off Carter’s old ESPN catch phrase (“C’mon, man!”), Horowitz asked Carter to show his new partner how to deliver it with a little more flavor.

“Nick put too much of that Anglo on it,” Carter cracked. “You gotta put a little more urban on it. ‘C’mon, man!'”

Wright got his own digs in while discussing FS1’s wealth of on-air talent. “Say you’re staffing a sports debate show. If you could pick anyone in the world, you’d pick Skip Bayless,” Wright told the huddle of GroupM execs. “If you want a guy who can be captivating just talking to you for three hours? That’s Colin Cowherd. Now you’re looking for a Hall of Fame athlete who can be a talk show host. Who’s my No. 1 pick? It’s Charles Barkley … but my No. 2 pick is Cris Carter.”

After an interval of good-natured jousting over the Barkley dis, Carter switched gears and his voice dropped into a more earnest register. “All kidding aside, I believe that Nick Wright will be the face of FS1 for the next 10 years,” Carter said. “I’m looking forward to doing a show with him because I believe in his talent, and I believe the best is yet to come.”

It’s going to be interesting to see what kind of a format this show has (we’re imagining debate, given that it’s FS1 and that it’s leading into Undisputed, but will there be any twists?), what sort of things it will cover, and how it will be received. Carter’s shown a bit of range in appearances on Fox’s other debate shows, but can he really talk about sports other than the NFL on a regular basis? And how will Wright (who’s espoused plenty of takes not exactly shared by some other Fox talent, such as the one pinned to his Twitter page criticizing the “All Lives Matter” movement and a colleague (presumably Jason Whitlock)’s comments about “Black Lives Matter”) fit in with Carter (who’s dropped some hot takes on a variety of fronts) in the long run? It’s notable that they’re going to New York, too, another move for Wright (as he noted on Twitter):

In all seriousness,coming to @FS1 was the best professional decision I've ever made &I'm so excited to go to NYC w/ my brother @criscarter80

There also could be a female host added. NFL Network’s Kay Adams and Elika Sadeghi are a few names we’ve heard as possible hosts (Sadeghi filled in for Joy Taylor a few months ago as the host of Undisputed), and others may be in consideration. And there might be more in the works, and some more announcements at Fox’s upfronts next week; the timing of this story suggests they might have a few more arrows in their quiver. This will be worth keeping an eye on as it develops, and it will be worth watching after it launches, especially to see if it gives Undisputed the ratings boost from a lead-in Fox thinks it will. Stay tuned.