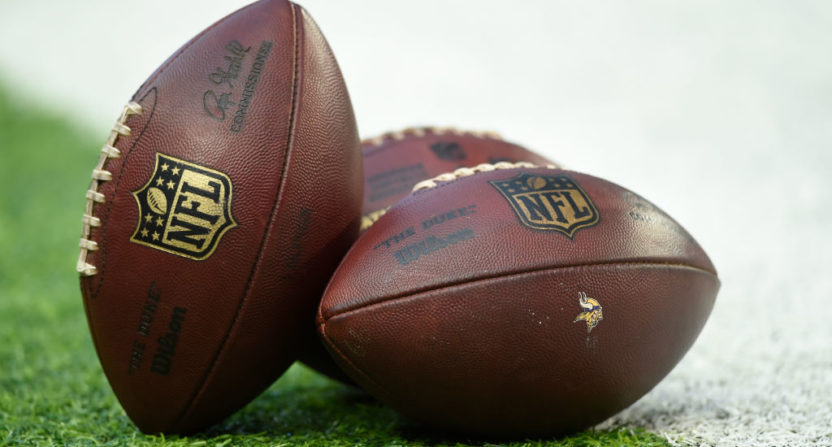 It’s not as if not watching pregame shows is a foreign concept, either – in a Twitter poll we ran this week, 90% of the over 4,000 respondents claimed they didn’t watch pregame shows, and 65% of the respondents were former pregame show watchers that walked away from the hype shows in recent years for a variety of reasons.

We also polled our staffers about pregame shows, whether or not they still watched, why they thought more people weren’t watching, and if they thought there was a future for multiple pregame shows on TV going forward.

Andrew Bucholtz: Part of the ratings decline for pregame shows does seem to be about shifting news consumption habits; if you’re looking for active/inactive info on a particular player for fantasy or betting purposes, it’s much faster to find that online. But that’s been the case for years; wider adoption of that habit seems likely to be part of the decline, but probably isn’t the whole story. Similarly, while saturation of NFL coverage may be a partial factor (if the Cowboys have been discussed on studio shows, radio and in print/online media all week, do you really need to hear the pregame show types repeat many of the same talking points?), that’s also not new. Those changes do put more focus on pregame shows to really find a way to provide value, though, and I think that’s where they’re coming up short.

To still be worth watching in 2017, pregame shows need to offer compelling host/analyst commentary and potentially interesting features. ESPN does a great job of the latter, but their analyst changes haven’t helped, particularly with the addition of Rex Ryan. Ryan’s bombastic bluster was interesting for a while as a head coach, but he doesn’t impress me in the studio, to say nothing of his stint as a game analyst. I think Sam Ponder’s done a good job as host, and is an upgrade over Chris Berman, but there are plenty who don’t like her, and that may play a bit of a role in the ratings drop. At CBS, Nate Burleson has been a good addition, but I don’t love Phil Simms in the studio; it would be nice to see some more in-depth analysis from him and less clichés.

NBC’s Football Night in America might be the best pregame show in my books, and the one I most regularly check in on thanks to both timing (it’s something to do in the span between afternoon and night games) and format (Dan Patrick, Tony Dungy and Rodney Harrison have great chemistry, and hearing them break down what did happen is more interesting than hearing morning shows opine on what might happen, plus segments from Mike Tirico and Mike Florio are often worth watching), but despite the content advantages thanks to its timing, it’s down in the ratings too.

The only pregame show holding steady from a ratings standpoint is Fox NFL Sunday, and some of that may be because they haven’t messed with it; it’s been the same five primary guys since 2008, so there’s strong on-set chemistry, and viewers know what they’re getting. But it also helps that Fox tends to have good games, and many people tend to tune in to whatever network they plan to watch later. In general, though, pregame shows are struggling, and I’m part of that decline; I’ll check out the different shows from time to time, but there isn’t much reason to regularly watch them these days. And it’s not going to be easy for networks to convince viewers that they need to check out a pregame show. They may need to either find some further value viewers can’t get elsewhere or accept the new normal of lower ratings.

Host: “Blah blah blah.” And then either go to a new topic/breaking news or go to break. For Fox NFL Sunday, add a few jokes and laughs in between.

That’s it, that’s every pregame show! And this goes on for hours! ESPN’s pregame show is three hours, Fox and CBS both have a pregame show to their pregame show and CBS’ pre-pregame show is four hours long starting at 8 AM ET. The NFL has a problem with over-saturation where there are too many time slots for games. And while that’s true, it’s also true for pregame shows.

It would be one thing if these pregame shows actually gave us something tangible to get us to watch that we couldn’t get anywhere else. But any sort of news that I would want to know is broken online and I find out at the same time it’s going to be revealed on the show. And if a pregame show has a great feature that is a must-watch, I’ll just watch it online when that gets uploaded soon after it was shown on TV. Other than that, it’s hours upon hours of the same “Embrace Debate” crap we’re subjected to during the week, it’s just concentrated on the NFL. And I don’t watch that so why would I spend my Sunday watching the same thing? I’ll just stick to watching the actual game.

Ian Casselberry: I do still watch pregame shows, but I admit it’s almost entirely work-related — notably when taking a look at new additions like Rex Ryan and Phil Simms. Most breaking news and actives/inactives leading up to the game, especially on Sunday, can already be found on Twitter without requiring an hour of your Sunday pregame time. And those shows rarely provide analysis of news and developments that’s worth watching. The emphasis seems to be on strained, phony banter between the people in studio (though some shows are better at it than others) and shouting or saying something funny over highlights.

Also, the sort of analysis that studio shows tend to do well with, looking at game footage and breaking down plays, is seen plenty during the week now on ESPN or NFL Network as they fill airtime. Additionally, game telecasts provide that kind of analysis now because the replays and camera angles are so good, and there’s enough dead time during the game to go more in-depth.

If I already know I’m spending most of the day watching football, I prefer to devote my Sunday mornings to sleeping in, getting breakfast and running errands. I can get what I need from my computer or phone and don’t need to hear what coach and jock have to offer. I’ve already seen or found that information myself.

Matt Clapp: I happened to catch about 15 minutes of the Fox pregame show on Sunday and it was the worst thing I’ve watched on television in a long while. I really don’t know who it could appeal to any longer. The analysis is largely garbage and the same stuff you can get 24/7 by turning on NFL Network/ESPN or this thing called the internet. Jay Glazer, Adam Schefter, or Ian Rapoport may have some big breaking news, but it’s always on Twitter either before that or seconds later. And dear god the attempts at humor on those shows are so painful.

Ken Fang: The pregame shows are for most intents and purposes obsolete. Injury news and other information can be gleaned from online sources. By the time the news is reported by the insiders on TV, the news can be considered old. Back when Brent Musburger said his patented “You are looking live,” it was the first time many viewers got to see the weather at various NFL sites. Now we know the forecasts days in advance, and on-site reports come as early as 7 am ET on gamedays.

With pregame shows running as long as six hours as in the case of NFL GameDay Morning, it’s really tough to stay with it that long. It’s not surprising that pregame show ratings are down. They are too many of them and some are too long. But the networks can still justify their existence, which is why they’ll last longer than a nuclear apocalypse.

Joe Lucia: I quit playing fantasy football seven years ago, so I really don’t care about who’s starting across the league. I only have one favorite team, and I only watch whatever window their game is in. If I’m going to sit in front of a TV watching a game for three hours, I’m not going to watch *at least* a half hour of a pregame show talking about games that are not the one I care about. If I’m watching games at a bar, I’m not going to pay attention to the pregame show with the sound off.

For me, there are more reasons *not* to watch pregame shows than there are *to* watch pregame shows. And this is one of those situations where I can’t find myself suddenly feeling the desire to start watching again – why bother? I have better things to do with my time. I’m not getting anything out of pregame shows. I would much rather watch a Sunday Premier League match, work out, go grocery shopping, or play a round or two of FIFA on my Xbox than watch a pregame show.

Alex Putterman: I don’t particularly watch pregame shows, likely for many of the same reasons the rest of America has seemingly soured on them: There are so many other places to get breaking news and commentary, sans commercials, platitudes and fake laughter. For any fan with an internet connection and access to Adam Schefter’s Twitter account, pregame shows are a bit superfluous.

But even if society doesn’t necessarily need so many pregame shows given the alternatives, it’s not as if any network will come up with more appealing lead-ins to the day’s games. Maybe networks could benefit from some fresh formats, but the shows themselves are probably here to stay indefinitely, whether we ask for them of not.

Jay Rigdon: I do not still watch pregame shows, and I haven’t for some time. My assumption is people are tuning out because the formula is quite stale; don’t we all kind of have the ability to predict what Terry, Howie, and Jimmy are going to say? There’s also some football saturation in play. The NFL Network is essentially a 24/7 pre-game and/or post-game show, and Thursday night games render moot whatever appeal the Sunday morning shows had as a table-setting for the week. And asking people, even devoted NFL fans, to commit to five distinct game broadcast windows every week means the shoulder programming is going to take a hit. People have shit to do.