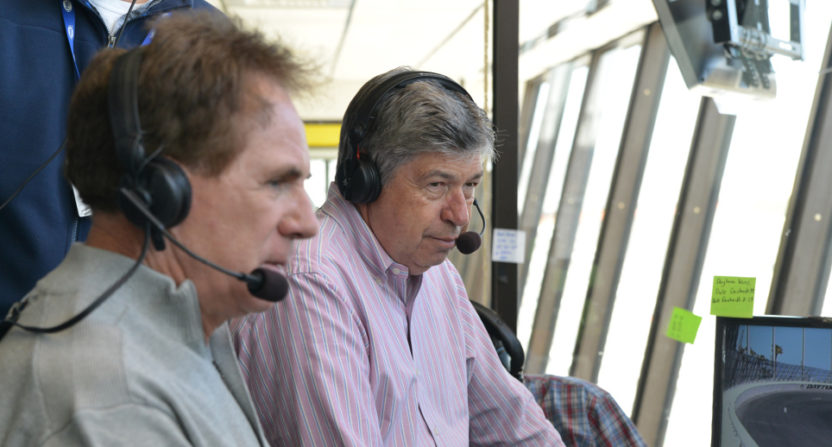 Mike Joy is covering his 43rd Daytona 500 Sunday, which is an incredible number. Joy (seen at right above with analyst Darrell Waltrip in 2015) has been doing play-by-play for Fox since they started airing NASCAR with the 2001 Daytona 500, and he’ll be joined by analysts Larry McReynolds and Waltrip, who have also been there since 2001. (Jeff Gordon will also be in the booth, calling his third Daytona for Fox.) Pit reporter Matt Yocum and host Chris Myers have been covering NASCAR for Fox since 2001 as well. But Joy particularly stands out because he’s been at Daytona for so many years, previously doing play-by-play and pit reporting for CBS as well as calling the race for radio. In that time, you’d think he’d have seen it all, but Joy told Awful Announcing recently that each race is unique, and that this year’s may be especially notable thanks to three major changes.

“Every year presents different challenges and different storylines,” he said. “The biggest this year is a huge influx of new drivers in very competitive cars. We had a couple of veterans get bounced because of salary issues, we had a couple of high-profile drivers retire, notably Dale Jr. who arguably has half the NASCAR fanbase, so a lot of fans are going to be looking for a new favorite driver. And the 500’s a great showcase, as well as being the biggest race of the year.”

Joy mentioned manufacturer changes as something else to keep an eye on.

“There’s also, I think, a big discrepancy amongst manufacturers,” he said. “Last year, Toyota introduced a brand-new body. This year, it’s Chevrolet that has a whole new body. Some people are saying the Fords will be faster in Daytona, the Chevys and Toyotas everywhere else, so we’ll have to see how that plays out.”

And in the race itself, he expects the changes to pit stop rules to have a big impact. NASCAR has been cutting down on the number of crewmen able to go service the car, with the latest change involving a reduction from six to five. That’s led to a lot of discussion about how teams are going to alter their pit stop plans to accommodate having one fewer crewman going over the wall, and Joy said that’s going to create notable effects as teams try to adjust to it.

“The other big wrinkle that I think will have an effect on the race just because of its newness is the teams asked NASCAR to reduce the number of people going over the wall on pit stops,” Joy said. “It used to be seven, it went to six, now it’s five, and the fueler can only fuel the car, can’t make chassis adjustments, so essentially you have a fueler and four crewmen.”

He said that at the moment, there are a whole lot of different approaches being tried, with little consensus on what is the best one. And while teams have been practicing under the new rules, there’s a significant difference between that and doing it on race day.

“I think the big thing with pit stops is even though teams have practiced this, they have not made stops in the heat of battle with four crewmen. And every team, I think there will end up being a quote-unquote right way to do this, but right now teams all have different choreography, and teams are going to make mistakes, or some of that choreography is going to prove not as effective as others in the close confines of pit road.”

Daytona presents an interesting challenge for announcers like Joy, as it’s a race watched by many new fans and many who don’t follow NASCAR year-round, but there’s also a substantial audience of hardcore fans. So there’s a balance to strike between providing information for new fans without overexplaining to veterans. That tension exists in many races, but Joy said it’s particularly notable with Daytona, thanks to it being such a widely-watched race and also coming at the start of the season, rather than partway in. He said that’s part of what makes Daytona so unique when compared to other sports’ top events.

“Daytona is unique; the biggest race and the most-watched race is the first race of the year,” he said. “I think by the time the Super Bowl comes around, virtually everybody knows the storylines. Daytona, it’s all right at the start.”