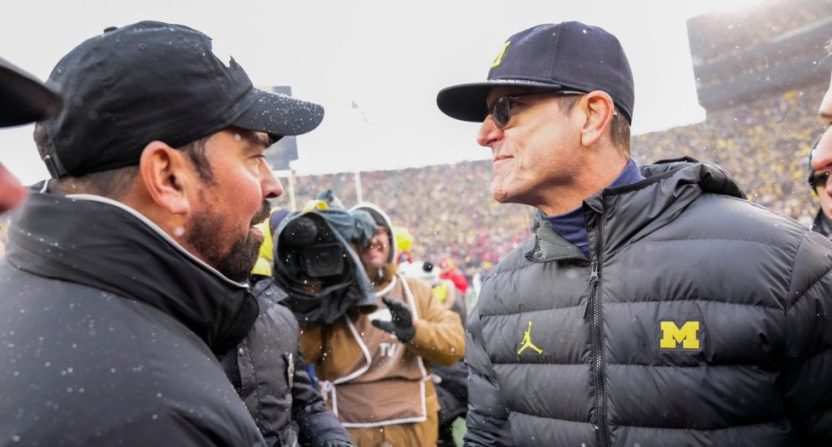 It’s always one of the most highly anticipated games of the college football regular season, and the stakes this year are incredibly high. Fox will air the annual Michigan-Ohio State game at noon on Saturday with a spot in the Big Ten Championship, and probably at least one College Football Playoff spot, on the line.

How many viewers will watch Michigan-Ohio State this year? Our staff let loose with their predictions.

Ben Koo: We have two pretty good data points for what the rating will be with 2016 and 2021 being similar to this year’s matchup in that the winner of the OSU vs. Michigan game is a Big Ten Championship game away from making the playoff. Last year’s game came in right below 16 million (15.9 million)  with 2016 almost cracking 17 million (16.8 million). The three variables in play here are 1) national intrigue level 2) quality of the game 3) what else is on at the same time.

I have a feeling that while national intrigue is up, there is a chance this game might not be as tight as Fox would want. The World Cup also having games while other playoff-contending teams (Georgia and Clemson) are playing makes me think that the game will likely mirror last year’s game and come in a little shy of 16 million. Let’s say 15.6 million which will still beat any other game this regular season by a few million viewers.

Jay Rigdon: Let’s get nuts here: 17 million. With the way the playoff race is falling in college football, this game really does feel like a de facto play-in game. Could both or neither school make it regardless of the rivalry result? Sure, of course. Anything can happen, especially with a committee involved, and very especially in a chaotic year like this one.

The World Cup offers somewhat unique competition, and from a “get as big a number as possible” standpoint Fox is somewhat unlucky that Mexico-Argentina will kick off at 2 PM Eastern, with Mexico being one of the few teams that could conceivably split an audience on a scale big enough to be a factor. That said, Ohio State and Michigan have been two of the top teams all season, and I think it’s going to be a fun, close game, with playoff intrigue and holiday hangover stay-home viewers boosting it to a huge finish for Fox.

Ken Fang: This is going to be a big weekend for Fox. Along with the World Cup, USA-England, on Friday and NFL, New York Giants-Cowboys, on Thanksgiving, Michigan-Ohio State is going to draw huge numbers. Last year, the game drew almost 16 million viewers and Fox is certainly licking its proverbial chops on the potential to get more. With both teams coming into this weekend’s game undefeated, there’s going to be a lot of interest.

As Jay mentioned, Mexico-Argentina on FS1 and Telemundo will draw away some viewership from Michigan-Ohio State, but I don’t think it’ll be enough to detract from what should be a monster number. I’ll say that this game will draw 17.8 million and that will be the highest viewership of the year for college football.

Sean Keeley: I certainly understand the concerns about the World Cup drawing some eyeballs away from this game, but I don’t believe for a second that it will that big of a difference. As much as the World Cup is drawing strong ratings, I don’t believe most college football fans will choose to watch something else instead of an Ohio State – Michigan game with Big Ten Championship and College Football Playoff implications.

While last year’s game came in at 15.9 million, we’ve seen this game almost top 17 million (2016). Given that this year’s game has the added intrigue of Ohio State seeking revenge and both teams playing for a CFP spot, I can’t imagine it doesn’t attract an even bigger audience than last year. Keeping in mind that the competitiveness of the game will play a role, I’m going to come in at 16.6 million to account for the scant amount of World Cup viewers who might have otherwise watched.

Michael Dixon: The positives are obvious — the teams are great and its one of the best rivalries in sports. What are the drawbacks? One is the World Cup, which has been mentioned. Another is that strangely, these teams may be too good. In 2016 and 2021, both teams had a loss. In 2022, both are undefeated. If this game is moderately close, the Wolverines and Buckeyes may both be in the College Football Playoff anyway.

That said, the loser would probably need a loss from another contender for that to happen. The most likely scenario — at least on Saturday — would be Notre Dame beating USC. And if the times of these games were flipped, that would be a bigger potential concern. But no Top-8 team will play before this game and only Georgia and Clemson will be in action at the same time. That will benefit this rating. So, if last year’s game came in just under 15.9 million, we’ll up the ante here by a million — 16.9 million.

Andrew Bucholtz: While the viewership numbers here will certainly be big, I don’t think they’ll hit 2016’s heights of 16.8 million. One reason why is increased competition. The World Cup may take some eyeballs away, but even more than that, the opposing CFB strength of schedule is much better. In 2016, the only other Top 25 team with a noon kick was No. 11 Louisville playing unranked Kentucky. This week, other prominent noon kicks include No. 1 Georgia (vs. Georgia Tech, ESPN) and No. 8 Clemson (vs. South Carolina, ABC), plus some interesting unranked battles like West Virginia-Oklahoma State (ESPN2) and Coastal Carolina-James Madison (ESPNU). None of those games will come close to the Michigan-Ohio State number, but they’ll all take some viewers away.

The other factor making me think this will be an audience below 2016 is the changes in the TV landscape since then. No regular-season college football game has hit 16.8 million since 2016, and three of the last five seasons had most-watched games significantly below 16.8 million, with only 2019’s LSU-Alabama (16.6 million) and last year’s Ohio State-Michigan (15.9 million) even coming within a million. We’re now in a higher streaming environment where there’s more on-demand  and streaming-only live competition. It’s also worth noting that unlike CBS (Paramount+) and NBC (Peacock), Fox does not have a standalone streaming service that makes it easy to watch its local broadcast affiliate, so they tend to get less of a streaming boost than those networks. This is still going to be a big number, but my prediction for it is slightly up from last year but well below 2016: 16 million.

Joe Lucia: I think my colleagues are overselling the live sports competition on the calendar Saturday (sorry, there’s no way you can convince me that a neutral would voluntarily choose to watch an unbeaten Georgia vs a “trying to become bowl eligible” Georgia Tech over unbeaten Michigan vs unbeaten Ohio State) and underselling this season’s positive college football viewing trends. Last year, just three games cracked eight million viewers heading into Week 13. This year, we’re already had six, and four of those six have topped ten million. Since we’ve moved into conference play, all but two Michigan and Ohio State games not airing on BTN has topped four million viewers. Last year, five games fell short of that mark.

The narrative about Michigan this season has also been different than last year. In 2021, the Wolverines weren’t ranked until Week 3. This year, they started off at #8, moved into the top five after a week, and haven’t left since. The 2021 team could have been looked at earlier in the season as a curiosity. The same is not true for the 2022 team, undoubtedly one of the best teams in the country since the season began.

With all that being said, I’ll take on the uncomfortable role of the optimist and say 18.1 million.