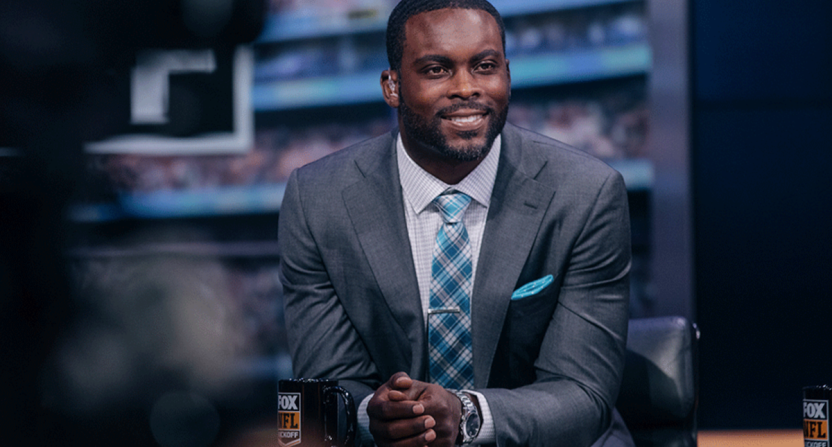 Michael Vick is five years into his broadcasting career as an NFL analyst with Fox Sports. The 13-year NFL veteran is still learning his craft, which was a big part of a Washington Post feature on the former dual-threat quarterback by Michael Lee.

As Lee details, Vick appeared ready to go into coaching after he retired from playing in 2015. Particularly encouraging was Kansas City Chiefs coach Andy Reid, who developed a relationship with the quarterback during his five seasons with the Philadelphia Eagles.

As a coaching intern, Vick worked with Patrick Mahomes and Alex Smith. He was set to be the offensive coordinator of the Alliance of American Football’s Atlanta Legends, but stepped down shortly before the failed spring league’s inaugural season began.

But when Cris Carter contacted Vick about appearing on FS1’s First Things First, he couldn’t resist giving broadcasting a try. Reid even helped with that, putting Vick in touch with Chris Berman and John Madden for advice on working in front of the camera.

Related: Michael Vick wasn’t sure he’d get a broadcasting shot, appreciates Fox’s belief in him

Vick spends a lot of prep time on Saturdays with fellow player-turned-analyst Charles Woodson, getting together to watch college football on Saturdays after preparing for the NFL pregame show. Working with someone else not far removed from his elite playing days, who knows what kind of homework is necessary for success, has apparently increased Vick’s appreciation for broadcasting work, he tells Lee.

“We was put on this Earth to be football players, not analysts, but it’s a special treat,” Vick says, looking over at Woodson. “It’s a special opportunity to sit in that seat and do this, too, because the game needs people like us.”

Another Fox Sports colleague who’s been helpful and supportive is Terry Bradshaw. Lee’s feature includes a funny moment in which Bradshaw stops by the Fox NFL Kickoff rehearsal to see how everyone is doing. At one point, Vick praises the Arizona Cardinals’ offense before expressing concern upon hearing that center Rodney Hudson is injured.

As Woodson and Dave Wannstedt begin to tease Vick, Bradshaw shouts advice to his fellow former quarterback from behind the camera:

The job is to come strong with opinions and not back down from them, even if it causes uproar among fans and media. Even better if something pops on social media for being unpopular. Of course, it would be nice if Vick was a bit more thoughtful in his analysis and commentary, but as Bradshaw said out loud — jokingly or not — it’s better to look confident in an opinion on-camera, even if some embellishment is required.

Lee’s feature isn’t just about Vick’s broadcasting career. The story also goes into how Vick squandered what could have been a Hall of Fame football career with his infamous involvement in a dog-fighting ring that eventually led to his imprisonment. That’s something for which some fans and animal lovers will never forgive.

Additionally, Vick laments not seeking more mentorship throughout his playing days, whether from coaches like Dan Reeves or the support offered by Atlanta Falcons owner Arthur Blank. Those are among the many mistakes he’s trying to make up for these days.