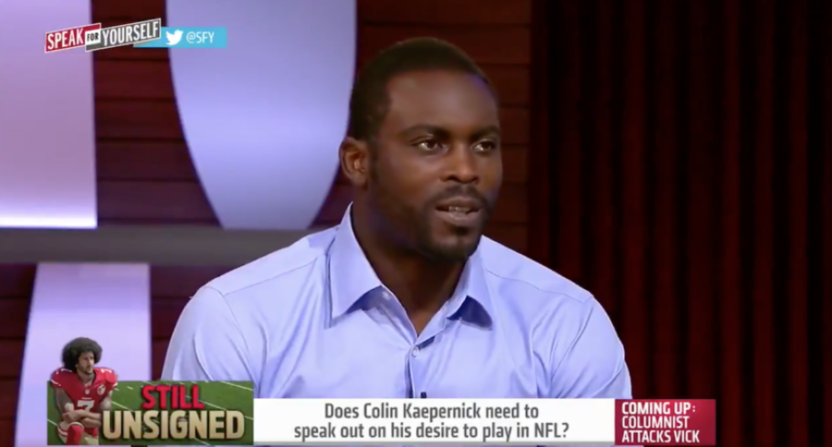 Fox keeps adding to their roster of NFL analysts, and their latest pick seems likely to be controversial. As per A.J. Perez of USA Today, they’ve brought in Michael Vick as an analyst for Fox NFL Kickoff (the early 11 a.m. Eastern pre-game show on Fox, which featured Charissa Thompson, Colin Cowherd, Dave Wannstedt and Charles Tillman last year; Tillman isn’t returning, and Tony Gonzalez has already been announced as an addition, but the full lineup isn’t out yet). Vick will also appear as an analyst on FS1’s debate shows. Perez has some quotes on the subject:

“I’m very excited,” Vick told USA TODAY Sports in a phone interview on Friday. “Over the last seven or eight months, I’ve done a lot of interviews, and I think I’ve gotten better as I’ve been put in those situations more often. Things really came together (with Fox) over the last couple months. They have shows that I have always watched and admired. My friends and family are thankful and proud of me.”

…”I have never criticized guys, but I will be critical. Great players understand that. I’ve seen the reactions from my teammates watching shows in the team lounge when they disagree with something. I’m a credible guy and I think people will respect that.”

…“He was obviously an outstanding player, but we feel he has an incredibly bright future as an analyst,” John Entz, Fox Sports president of production and executive producer, said in an email to USA TODAY Sports. “He has stayed close to the game and has many relationships with today’s current coaches and players. We feel he can bring a truly unique perspective that intrigues and engages our viewers.”

Interestingly enough, that piece has only one line about Vick’s 2007 conviction for his role in funding a dogfighting operation with plenty of accounts of cruelty to animals, and it’s buried in the second-to-last paragraph. That conviction is going to come up in any job for him, though, and there are still lots of people who are very angry about what he did. Consider the conclusion of this 2009 piece on PETA’s blog from Joel Bartlett (in response to this Richard Cohen Washington Post column). Bartlett opined that Vick shouldn’t have been allowed back in the NFL even after serving his time (21 months) in federal prison:

We gave the man the benefit of the doubt, but he tested positive for marijuana on the day he was taking an empathy course. Then, weeks before he was set to go to jail, he went into a pet shop in Newport News, Virginia, and bought a bulldog. Frankly, nothing sat right. We worried that “I’m sorry” might just be words in the wind. We didn’t want his empty words or his money (offered and rejected). We wanted him to take the latest neurological test that’s now being given to violent offenders—a test that can tell if the part of one’s brain that registers empathy is active. He wouldn’t do it. That’s when we said, “So long.”

Michael Vick may deserve to walk free, but he doesn’t deserve to be a football star or a hero to children, and no group has any business helping him do so. We thank Richard Cohen for remembering the dogs Vick personally electrocuted, held underwater in a swimming pool, strung up like hammocks, and slammed into the ground until their backs broke.

2009 is a long while ago, of course, but much of the anti-Vick sentiment remains. Consider this 2016 piece from Mother Nature Network, which discusses how some Pittsburgh Steelers’ fans abandoned the team once they signed Vick and how many animal advocates still despise Vick despite his efforts to rehabilitate his image:

The locals rallying against the home team haven’t supported their city’s most popular sports team since August, when quarterback Michael Vick joined the team.

“Hopefully Vick will not be re-signed and will go far, far away and live a quiet life where he never lays a finger on another animal,” reads a post published to the Pittsburghers Against Michael Vick Facebook group on Sunday. “He has no place in Pittsburgh or anywhere in the NFL, for that matter.”

…“Neither Michael Vick nor any of his Bad Newz Kennels cohorts were ever tried let alone convicted for animal cruelty. The federal case was all about racketeering,” said Francis Battista, co-founder and chairman of the board of directors for Best Friends Animal Society, a no-kill sanctuary that took in 22 of the 49 dogs found alive on Vick’s property.

…“What Michael Vick did was not just dogfighting,” Marthina McClay, who adopted one of the Vick dogs, told The San Francisco Chronicle. “It went so far beyond that, and most people who defend him are uninformed.”

After failing a polygraph, Vick admitted to killing dogs that wouldn’t fight or didn’t perform well, but he never faced animal cruelty charges and many of critics are angry about it. It’s part of the reason why Vick continues to encounter protesters at his games and why people still raise the question of “If he hadn’t gotten caught, would he still be killing dogs?”

Oh, and that’s to say nothing of Vick’s more recent controversial opinion (unveiled on FS1’s Speak For Yourself, of course), that Colin Kaepernick should get a haircut (which he later tried to walk back, without much success):

“First thing we got to get Colin to do is cut his hair. Listen, I’m not up here to try to be politically correct, but even if he puts cornrows in it, I don’t think he should represent himself that way in terms of just a hairstyle. Just go clean cut.”

So, yeah, hiring Vick is going to make some waves. And perhaps that’s what Fox wants. But it will be interesting to see just how much of a backlash develops here.