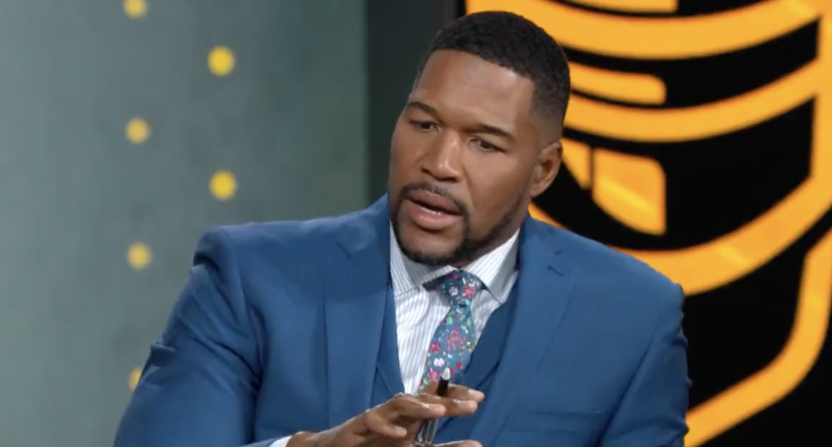 Skip Bayless has spent the last week reaping what he’s sowed following his insensitive tweet in the aftermath of Damar Hamlin’s injury. He’s been hearing about it from all sides ever since, and that includes some of his fellow Fox employees.

“You don’t have to be a football player to understand how big this was…There were things done here, by somebody at this network, that were inhumane. said Strahan, indirectly calling out Bayless. “Sensible people, sensible human beings have a heart. And they understand that your words and what you say really have an impact.”

"You spoke about humanity… but there were things done here, by someone here at this network, that were inhumane." pic.twitter.com/MhXHuhKJ1O

After Hamlin collapsed on the field last Sunday during the Bills–Bengals game, he required CPR and was rushed to a medical center in critical condition. Meanwhile, his teammates and fellow NFL players seemed shell-shocked while everyone waited to see if the game would continue or not. That’s when Bayless tweeted his now-infamous comments.

“No doubt the NFL is considering postponing the rest of this game – but how?” Bayless tweeted. “This late in the season, a game of this magnitude is crucial to the regular-season outcome … which suddenly seems so irrelevant.”

After getting so much pushback, the Fox Sports host claimed he was misunderstood, tweeting “Nothing is more important than that young man’s health. That was the point of my last tweet. I’m sorry if that was misunderstood but his health is all that matters. Again, everything else is irrelevant. I prayed for him & will continue to.”

However, the damage was done and Shannon Sharpe, his co-host on Undisputed, didn’t appear on the show the next day, seemingly out of a desire to separate himself from Bayless. While Skip apologized, in a way, that apology was not accepted by Sharpe who returned the next day and laid into his co-host about the comments and the way he’d refused to take true ownership for the damage they’d caused.

Meanwhile, Bayless seems impervious to the feedback or criticisms as always, and it doesn’t appear that he is facing any kind of pushback from Fox or Fox Sports aside from the comments his colleagues continue to make about him.