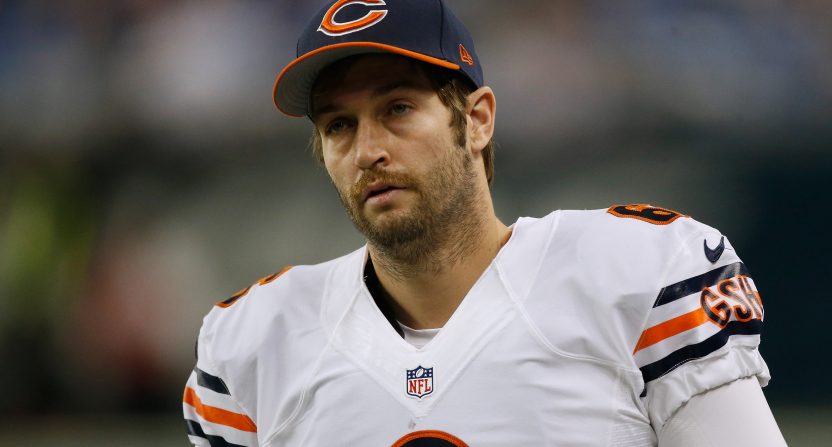 One of the most problematic trends in media is the usage of quotes from anonymous scouts ahead of a draft, which we’ve frequently seen in both the NFL and the NBA. Not only do those scouts regularly offer pointless and irrelevant takes, from “Eli Apple can’t cook” to Skal Labissiere as a “mock draft myth” (well, actually, he was taken 28th overall), their opinions would be suspect regardless of if they’re accurate given their stakes in the outcome. From an incentive standpoint, the most logical thing for any anonymous scout or executive to do would be to bash players their team’s interested in and play up athletes they don’t want, increasing the chances they get the player they want in the end.

However, media keep quoting these scouts anyway, and this extension of anonymity to a very biased source for criticism of a prospect has now spread to the sports media beat. It did so Friday, with Michael McCarthy of The Sporting News quoting  “one TV executive” who thinks new Fox hire Jay Cutler won’t be a good broadcaster:

“His reputation is that of a spoiled, entitled brat who squandered immense physical gifts,” said one TV executive who was surprised by the Cutler hire. “It never seemed like his heart was in it. The picture you have of him in your mind is him frowning on that exercise bike on the sidelines of that NFC championship game, while his teammates were losing to the Packers.”

Look, people can offer their own praise for or criticisms of Cutler (as McCarthy does in the rest of the article; some of his points are valid, some of them are more questionable), but there’s more merit to those opinions when it’s backed by a name. With a name, we know who’s opinion it is, and we can figure out what potential biases they have and if their opinion is worth paying attention to. Without a name, all we have is the identifying information of “one TV executive.”

That executive presumably doesn’t work for Fox (it seems highly unlikely they’d bash a new hire by their network, even anonymously), so they’re likely from a competitor with NFL rights (CBS, NBC, or ESPN); they could be from a network that doesn’t carry the NFL, but why would they be evaluating Cutler then?

Any executive from any of those competing networks has incentive to play up their own talent and bash the other networks’ talent. It doesn’t really matter if this is the executive’s honest opinion or if they’re bolstering that opinion to serve their network’s interests. There’s at least the perception of a conflict of interest. And even that conflict of interest could be okay if the exec was willing to attach their name to the quote, as we’d be able to judge their reputation and their history and see if their opinion is worth paying any heed to.

There also could be potential blowback for them if what they say doesn’t come true or is deemed too extreme. By contrast, with the source shielded by anonymity here, the only possible effects of this quote are negatives for Cutler and Fox. That benefits whatever network this source happens to work for.

By the way, it should be noted that that picture of Cutler “frowning on that exercise bike while his teammates were losing to the Packers” came in 2011, where it was later determined that he had a MCL sprain. I’m sure that anonymous TV executive is fully experienced with how painful that injury is and how difficult-to-impossible it would be to play with it. No, I’m not, actually, and it’s interesting that neither that executive nor McCarthy mentions that important bit of context.

This isn’t to say that anonymous sources have no place in the media. There can be plenty of good reasons to provide anonymity, especially if it leads to breaking news. But anonymous opinions are much more tricky, as they provide the source the chance to advance an opinion and perhaps an agenda with no risk of blowback.

Even then, anonymous predictive opinions can have some merit (as long as the source’s potential bias is stated). And anonymous talent evaluations can be okay when they’re more speculative. For example, quotes about whether a still-active player might make a good broadcaster or not have less immediate bias (and unlike with the scouts, there’s no draft, so it’s actually in execs’ favor to boost guys they’re really eyeing).

Those evaluations have even more force when they’re on the record, though, as we saw with a few execs and analysts telling Richard Deitsch how they viewed Peyton Manning’s broadcast potential back in 2013. And compare Deitsch’s recent column, with Kevin Burkhardt talking about how Cutler crushed his audition; yes, Burkhardt is biased because he also works for Fox, but with his name attached, we can at least give that bias the proper consideration and see if his comments still have merit.

What McCarthy provides here isn’t that, though. Instead, it’s an anonymous talent evaluation for a move that’s already happened. And it’s presumably from someone who has no incentive to say good things about the analyst and the hire, every incentive to bash them, and no potential repercussions for saying these things. Printing that seems highly problematic. Here’s hoping this doesn’t become a trend.