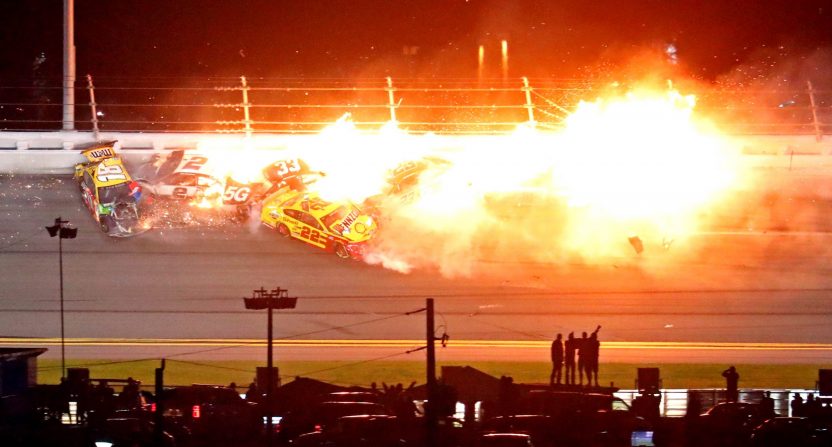 In the final lap of the 63rd Daytona 500, a fiery crash among the leaders provided the opportunity for Michael McDowell to get the lead and win in an upset over the top teams in NASCAR.

Retweet to congratulate Michael McDowell on his #DAYTONA500 WIN after a huge crash coming to the finish!@Mc_Driver | @Team_FRM pic.twitter.com/lTsyYF7Gxq

Dangerous and scary crashes like this are unfortunately common at places like Daytona and Talladega but even if we know it’s coming, most people have some sort of loud reaction to something like that. Unless you’re Matt Kenseth.

The NASCAR driver was doing a watchalong of the race with Greg Biffle and Hailie Deegan for Fox and well, Kenseth’s reaction to the finish wasn’t something you would expect. Make no mistake, this watchalong wasn’t a regular broadcast and no one was expecting Kenseth to do play-by-play like Mike Joy did on the Fox broadcast, but Kenseth sounded like he should’ve been describing a three foot putt for par instead of the kind of explosions that would make Michael Bay jealous.

Matt Kenseth is a national treasure lmao. Unreal how calm he was after all that pic.twitter.com/QbHn3JcI8q

“It’s mixing up right now, there goes the 3 car for third. Like I said, Brad [Keselowski] did the best job of timing that run but you got two teammates and you got the 34 in third place. It’s going to be hard to muster anything up.”

Now I know what it would’ve been like if Bob Ross had done NASCAR commentary.

In some strange way, I like this anti-commentary from Kenseth. It’s like a comedian who tries not to be funny. It’s not for everyone but if the right person can come along and channel that and fully get into it, they can be brilliant. Kenseth fits that bill and now I’m wondering what else he could do.

Imagine the “Miracle on Ice” if it was called by Matt Kenseth. “Five seconds left. And it looks like the Americans have won against the Soviets.” Keep up the matter-of-fact commentary.

Can you really blame him for swinging?

Can you really blame him for swinging?