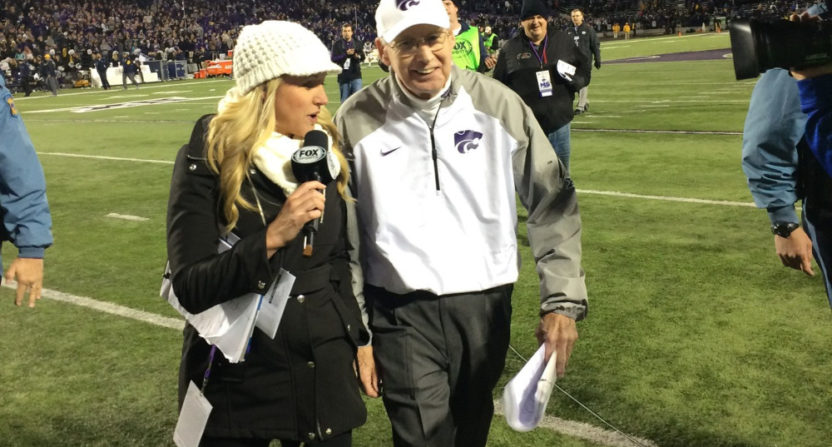 Many women in sports television have discussed the pressure that often exists to look or dress a certain way, and ESPN college football sideline reporter Kris Budden has a particularly interesting take on that. Heading into her second season with ESPN, Budden wrote a blog post Thursday about how she hid her pregnancy during the end of her Padres’ coverage for Fox Sports Southwest and her college football work for Fox in 2015, saying that she did that because of how she thought she was supposed to look:

But during that time, I became very insecure about my pregnancy. I said goodbye to the viewers in San Diego, and never mentioned we were having a baby. I went through an entire football season wearing baggy clothes and heavy coats trying to hide it. I never brought it up to the players and coaches I was covering. I don’t know how to describe the feeling other than to say I was embarrassed. I know, that’s a horrible thing to say. I hate myself for even typing that.

Here’s my reasoning behind it. In tv, especially as a woman in sports, you feel that you  have to be pretty, skinny, best-dressed, ageless. Yes, I know my job is so much more than that, but you do feel pressure to look a certain way. When you are pregnant, you feel anything but those qualities. At least I did. I was not one of those women who have a certain “glow” about them. I called that sweat. I also felt like there was a certain perception about female sideline reporters. I thought that if people knew I was a mom, the viewers would look at me differently. They would look at me like…. like I did. Like I was old.

It’s no secret that there aren’t as many women in sports in their 40s. Maybe I thought that becoming a mom would put me “over the hill” in tv age. That it meant I reached the peak of my career, and everything after that was downhill.

It’s absolutely true that there aren’t a lot of women in their 40s in the sports media, especially on the television side, and we’ve seen plenty of veterans like Pam Oliver being demoted in favor of younger reporters. Appearance has often been cited as a reason why, and that was discussed in an age- and gender-discrimination lawsuit Colleen Dominguez filed against Fox Sports in 2015 (which was eventually settled this January). Dominguez wrote in early 2016 that she felt plenty of appearance-based pressure at Fox:

In my industry, those in the executive offices seem to think they know exactly what and who viewers want to watch. Many of those executives are men. At Fox Sports they most certainly are. Trust me, the irony isn’t lost on me that men my age are telling me that I’m no longer good enough because I’m their age. It was humiliating for me to think about them sitting in meetings evaluating video of my face and body as well as when there was office talk about management possibly asking me to get a facelift. It’s almost 2016 and this is the message networks want to send to our mothers, sisters, daughters, neighbors and co-workers. When it comes to women, youth is valuable and experience is disposable. Really?

However, Budden’s piece says her decision wasn’t about external pressure, but about her own thoughts on how she’d be perceived, and she now wants to encourage women in sports media to be open about pregnancy and motherhood.

On top of that, I was also in between jobs. Who would want to hire a pregnant woman for a job on tv? I can tell you now…. many will. I auditioned at the Tennis Channel 32 weeks pregnant. I was hired on the spot. I was also in talks with ESPN at the time. They offered me a job six weeks after I had Jace. I was wrong. People didn’t hire me because I was a cookie-cutter, blond, skinny female who knew sports. They hired me because I was dang good at my job.

I looked back at it now and I feel incredibly naive and stupid about it all. I’m at a company with the top reporters in our industry. Some are moms. Some aren’t. Regardless, they all got there on merit. Not looks or their age. So why did I think my case would be different? I’d been covering college sports for 12 years. Why did I think becoming a mom would negate all that?

…To all the other women in my industry that want or are about to start a family: don’t hold off on it because you’re afraid of how it will affect your career. I can tell you now, it doesn’t matter. The majority of viewers and bosses in this industry will not judge you based on your age and the number of children you have. And don’t concern yourself with the ones that do. They don’t hold a cup or tea in comparison to the love you’ll have for your family. The hard part is managing the love for your job and your family. I’ll save that for another post.

Here’s hoping that Budden’s right, and that the majority of viewers and bosses respect good work rather than just a reporter’s appearance. The stories about Dominguez and Oliver, plus Doris Burke’s recent discussion of how she had to update her wardrobe to get higher-profile ESPN assignments, suggest that appearance is still a major consideration in many circumstances, though, and it’s easy to see why that perception would lead Budden to thinking she needed to hide her pregnancy on-air. Explicitly saying that is probably farther than even problematic executives would go (and telling a reporter to do that would likely prove excellent lawsuit ammunition), but it’s not hard to see a reporter thinking that appearing pregnant on-air might be a negative for their career.

Maybe sports media can improve to a point where female broadcasters don’t have to be as worried about how they’re viewed, and maybe Budden’s advice to not worry about age and children will prove true. But there are still plenty of problems with how female broadcasters are perceived, and with the apparent pressure on them to always be concerned about age and appearance. Budden’s post is a good illustration of just how problematic that pressure can be.