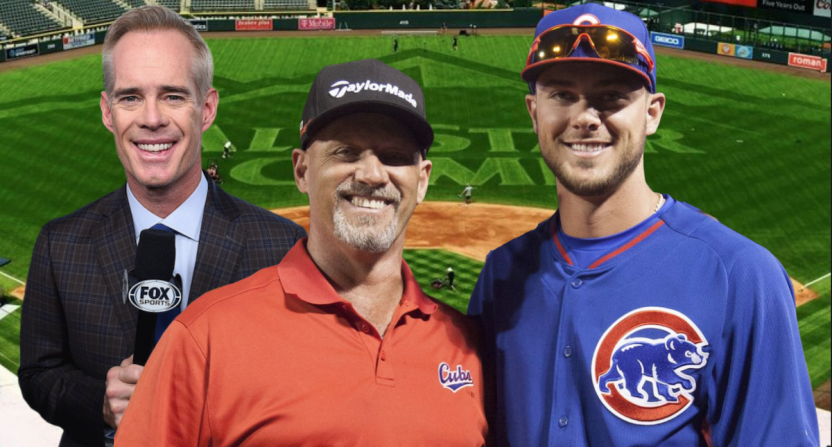 Major League Baseball players being mic’ed up on the field for in-game interviews was a big part of Fox’s All-Star Game coverage Tuesday night.

While it was fun to get a glimpse of the players’ personalities outside of the often rote answers provided during postgame interviews and some insight into the game, at least one All-Star’s father did not appreciate the line of questioning coming from play-by-play broadcaster Joe Buck.

During the seventh inning, Buck interviewed Kris Bryant while he was playing left field. And he started the conversation by asking the free-agent-to-be about the possibility of the Chicago Cubs dealing him off before the July 30 MLB trade deadline.

“As we sit here now, in the middle of July,” asked Buck, “not knowing where you’re going to be at the end of July, how do you keep your concentration through all that?”

Bryant first replied by saying that playing various positions around the field helps him focus. Maybe that was a bit of a dodge, but he then said he’s a Cub as long as he wears that uniform and is proud to do so. Several Cubs fans were annoyed by Buck’s question. After all, Bryant was in Denver representing the Cubs. Why talk about him playing for a different team?

Kris Bryant says playing all over the place helps block out some of the noise to focus.

"Right now, I still got the Cubs on my chest and I'm proud of that. Proud to play for such an unbelievable city. And until they tell me I'm not, I'm gonna go out there and give it all I got." pic.twitter.com/MkTgaLBP81

Among those upset was Bryant’s father, Mike, who was in attendance at Coors Field but heard about the interview later. When asked about it by Cubs Insider’s Evan Altman (via Midway Minute), Mike Bryant expressed his displeasure with his son being confronted with trade rumors on live TV.

“I simply cannot express my disappointment at Joe Buck asking my son about his future with the Cubs while he was playing left field in the All-Star Game. This was a classless act and has no place in the game. I’m so glad I was at the game and not watching it.”

Bryant went on to say that Buck should apologize to his son for putting him on the spot.

Joe Buck asking Kris Bryant about the Cubs' 11-game losing streak and the possibility of him being traded while actively playing in the All-Star game was a disgusting act.

Yet would Buck have been doing his job had he not addressed the main topic regarding Bryant? He had the Cubs star on the microphone and an opportunity to ask a question that the national TV audience probably had on its mind too. Perhaps the setting wasn’t ideal, but that’s the circumstance in which Buck and Bryant were placed.

And if Buck had just asked goofy, softball questions to Bryant, he probably would’ve been knocked by fans and critics for that. “Hey Kris, is Coors a beer you like to drink?” Or as Midway Minute’s Kevin Kaduk suggested, what if Buck had asked Bryant about trying Rocky Mountain Oysters? Maybe Mike Bryant would’ve been OK with that, but most others probably would’ve called Buck a hack.

Even at the All-Star Game, the Cubs' Craig Kimbrel and Kris Bryant couldn't avoid questions about the looming trade deadline.

"At the end of the day," Kimbrel said, "that’s not a decision that I make."@M_Montemurro's story from Denver.https://t.co/1Ot6qNx6rA

Besides, Kris Bryant has been asked about trade rumors and pending free agency frequently since the 2021 MLB season began (and probably going back through the offseason). He faced those questions throughout All-Star festivities. It’s a pertinent topic, considering Bryant’s standing as the cornerstone of a team five seasons removed from winning a World Series. Such players often stay with a team during their entire careers.

So if Mike Bryant is really expecting an apology from Buck, he’s very likely to be disappointed. And though fans find plenty to for which to criticize him, Buck did nothing wrong and has no reason to apologize.