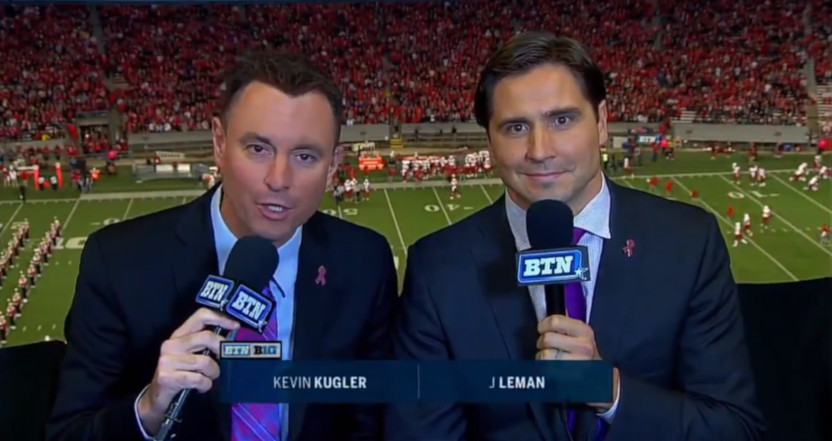 After Thom Brennaman’s use of a homophobic slur during a Fox Sports Ohio Reds-Royals broadcast last Wednesday, he apologized during the second half of that doubleheader (interrupting that apology to call a home run), and was quickly suspended by the Reds and Fox Sports Ohio. Last Thursday, Fox Sports put out a statement calling Brennaman’s remarks “abhorrent” and saying that he wouldn’t be a part of their NFL on Fox coverage this year. That’s notable, as Brennaman had called NFL on Fox broadcasts going back to 1994 and had done so on a regular basis since 2009, most recently with Chris Spielman and Shannon Spake last year. Richard Deitsch of The Athletic reported Tuesday that Fox Sports has now picked a replacement, Kevin Kugler:

That meant Fox Sports had to replace a play-by-play announcer for one of its NFL broadcast teams and had to do so quickly. Industry sources said Fox was pitched by broadcasting agents as well as individual talent for the open spot, one of the premium jobs in sports broadcasting given the limited number of NFL play-by-play broadcasters. In the end, Fox decided to stay close to home.

The Athletic has learned that Kevin Kugler will take over Brennaman’s NFL play-by-play role. He will partner with Chris Spielman and reporter Laura Okmin. Kugler has previously filled in for Fox on NFL games and has a terrific reputation within the industry as play-by-play caller.

Indeed, Kugler has been listed as an additional NFL on Fox play-by-play voice for at least the past two years, calling several games for them during that time (including filling in for Brennaman on a Week 8 Seattle Seahawks-Detroit Lions game back in 2018). And he has a lot of NFL experience; he’s been calling NFL broadcasts on radio for Westwood One and Dial Global since 2009, including Sunday Night Football and playoff games. He’s also done a lot of college football, especially with the Big Ten Network (since 2011), and he’s called basketball, golf and more. He’s also called several Olympics for Westwood One; in 2014 in Sochi, his fourth Olympics, he called long-track speedskating and also hosted a two-hour nightly show, and spoke to Troy Fedderson of the University of Nebraska-Lincoln (Kugler’s alma mater) at that time about how thrilled he was with where sports had taken him:

“I never dreamed I would have these opportunities. If you had walked into (Rick) Alloway’s sports broadcasting class 20 years ago and told me that I would call Olympic speed skating in Russia, Team USA basketball in China or the NCAA Final Four, I would have thought you were crazy.”

Kugler now gets to add yet another high-profile job with a regular role on The NFL on Fox. And it’s unclear if this move will be just for this year or for the longer term. Kugler has some more availability than normal thanks to the Big Ten not playing fall sports this year, but it’s also quite possible that he could stay with the NFL on Fox on a more permanent basis if this stint goes well. (Of course, many of Kugler’s Big Ten duties wouldn’t conflict with Sunday NFL games even if the Big Ten was playing this fall as normal. It’s also notable that the Big Ten Network is 51 percent owned by Fox, so it’s the same overarching corporate structure; that tends to make things easier.)

As for Brennaman, he may also return to the broadcast booth at some point. But it may be hard for him to get a national NFL job again, especially considering that his NFL work wasn’t considered to be all that outstanding by many; he and Spielman finished eighth of 14 booths in our fan-voted national announcer rankings last year and seventh out of 14 in 2018, with most of the commentary in both years praising Spielman and criticizing Brennaman. So there may be a longer-term opening here.

Of course, that’s all speculative at this point, and we don’t know how Fox plans to approach the NFL beyond even this year. But if there does wind up being a longer-term slot available, it will be interesting to see if that involves them keeping Kugler or bringing in someone else. At any rate, it’s certainly notable to see this move, and to see Fox going with a veteran play-by-play voice who wasn’t already at Fox Sports.

[The Athletic; Kugler screengrab from a 2018 Big Ten Network broadcast, via Saturday Tradition]