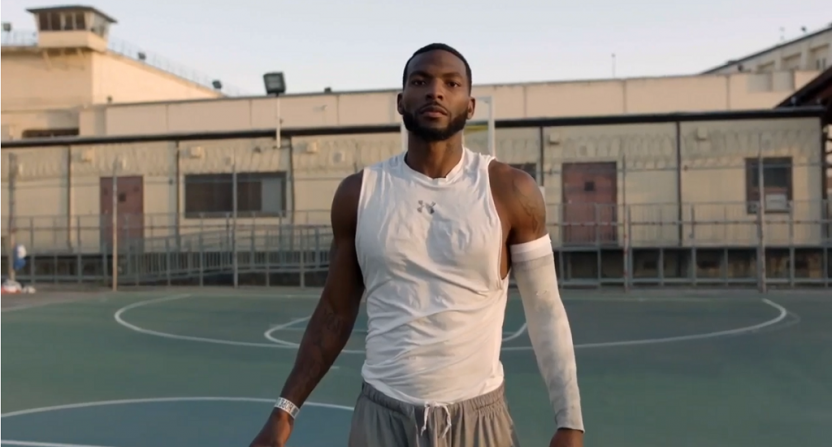 San Quentin State Prison houses some of California’s most dangerous and notorious criminals. Charles Manson called it home before passing away in 2017. Scott Peterson is among the state’s 737 death row inmates. It’s an ugly place filled with people who have committed unspeakable crimes. In an interesting juxtaposition, San Quentin is only 18 miles from San Francisco, one of America’s most desirable locales. Real estate there is the nation’s costliest with a single-family home selling for an average of $1.6 million.

You might think that people inside this prison would be hard-pressed to positively interact with people outside prison. You would be wrong.

The documentary Q Ball chronicles the lives of the San Quentin Warriors, a group of inmates who play basketball against teams from beyond the prison walls. The documentary, whose executive producer is Golden State Warriors forward Kevin Durant, will debut Tuesday May 28 on FS1. Q Ball, directed by Michael Tolajian, is worth your time.

The San Quentin Warriors are supported by the Golden State Warriors. Their reward at the end of the season is a “championship game” against Golden State. Well, sort of. There’s no Steph Curry, Klay Thompson, or Durant. But the San Quentin Warriors do get to face off against members of Golden State’s front office, including assistant general manager Kirk Lacob and his younger brother Kent Lacob, the GM of the Santa Cruz Warriors, Golden State’s G League team. Basketball is a welcome respite from the dehumanizing, monotonous, and perilous existence of prison life. Something to look forward to for people whose futures are often bleak.

The United States incarcerates a larger share of its population than any other country. Some of the most violent offenders are at San Quentin, which opened in 1852. It’s a well-earned reputation. Q Ball begins with Lt. Sam Robinson, San Quentin’s public information officer. Born and raised in Oakland, he described the prison as a place that “struck fear.” Robinson has worked at San Quentin for 22 years, and within his first 6-8 months on the job, he witnessed his first murder.

San Quentin has the nation’s largest death row, but most inmates (3,774 total) are in the general population. The criminal justice system’s mission is not only to punish, but also rehabilitate. Many of the incarcerated will eventually return to society, and as Robinson says, prison “has to be a place that offers people the opportunity to reclaim themselves.”

Can basketball help modify behavior? Q Ball doesn’t offer definitive conclusions. There’s no data and perhaps that’s not the point of the documentary. What you get are the stories of these players/prisoners – their lives before and after the crimes they’ve committed. This is not an attempt to gloss over or minimize their involvement.

Some of them have done awful things.

Anthony “Ant” Ammons is serving 102 years-to-life for his involvement in a murder when he was 16. Allan “Black” McIntosh is doing 25 years-to-life for possession of a firearm because he’s a “three-strikes” offender.

Rafael Cuevas, a former San Quentin Warriors player turned San Quentin Warriors coach, might be the most infamous in the group. In 2008, he was found guilty of second-degree murder in the 2004 stabbing death of 21-year-old Timothy Griffith outside of the San Francisco Giants’ ballpark.

The most chilling part of the documentary is Cuevas recounting the graphic details of what lead to the encounter. It’s an uncomfortable listen, especially when you learn about the innocuous interaction that preceded the assault. No one is going to feel sorry for Cuevas, who will be eligible for parole in 2023.

Q Ball does give equal time to Griffith’s mother who poignantly says, “He will be able to live a life that Tim will never live. Why should he perhaps have a family, enjoy life or run on the beach? Tim will never be able to do that.”

Those are the worst stories we hear in Q Ball. The tale of San Quentin Warriors’ best player, Harry “ATL” Smith, is a little different. Nicknamed “The Phenom,” it seems like he could’ve been somebody. The son of a microbiologist and a police officer played AAU ball in Atlanta where he competed with current NBA players like Dwight Howard. Smith said he was good enough to earn to earn a Division I scholarship offer from Cal State Northridge. But the offer was later rescinded. Smith described that moment as a turning point that “shattered me.”

Smith was convicted on a domestic violence charge and sentenced to eight years. Despite being 31, he still dreams of a pro sports career and being the first convicted felon to play in the NBA.

The goal of any documentary is to show its subjects as complete human beings. Q Ball accomplishes this by simply letting the prisoners tell their stories. You can see horror or a glimmer of hope depending on your own prism. There are apparently many people who see the latter because these are volunteers who come to play the San Quentin Warriors. What’s in it for them? There are more enjoyable places for a pickup game.

For at least a moment, there’s no difference between the people in prison and the people outside of prison. They’re all simply basketball players.