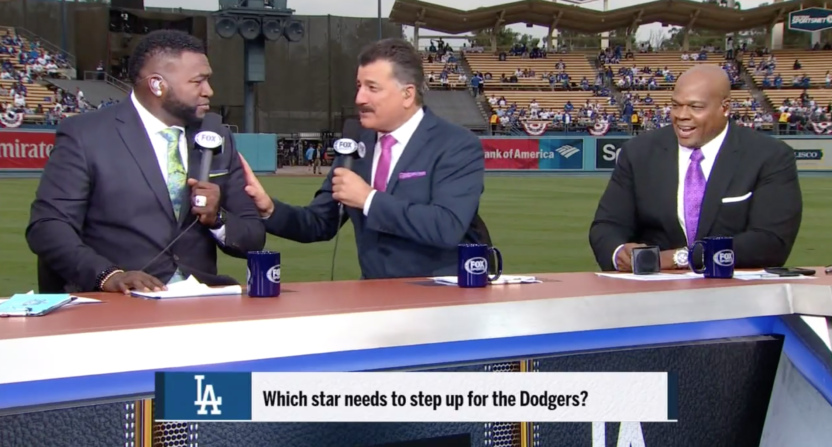 In the minutes before Game 7 of the World Series on Wednesday, new Fox baseball analyst Keith Hernandez made a comment on the pregame show he may want back.

After fellow analyst David Ortiz pretended to lick Hernandez in reference to Dodgers outfielder Yasiel Puig, Hernandez put his hand on Ortiz’s shoulder and said, “I’m from San Francisco, bro.” The comment sure seemed to be a reference to San Francisco’s gay community.

Many fans caught the remark and were not amused, accusing Hernandez of homophobia.

#KeithHernandez sounded pretty homophobic in the pregame @FOXSportsPR. Not cool ?

Um, Keith Hernandez homophobic much? Not a cool comment. Need to address that shit

Yes, focus on whether or not Keith Hernandez said he's not from or from San Francisco. Not the homophobic crap he just spewed.

And then Keith Hernandez makes a gay joke about San Francisco….

@MLBONFOX Did Keith Hernandez make a gay reference when Papi said Puig would kiss him? He said " not in San Francisco"

Much like his mustache and prowess, Keith Hernandez’s jokes were better in 1985. #WorldSeries

Keith Hernandez is going to get hammered for the comment he just made on the pregame show…..

Hernandez may wind up having to eat crow for this one.

UPDATE: Through a spokesman, Hernandez issued the following statement:

“I made a poor attempt at humor and never intended for it to be taken the wrong way. I am from San Francisco and as baseball fans know, the Dodgers/Giants rivalry runs deep. I did not grow up a Dodger fan and when it came down to Giants vs. Dodgers, I rooted for the Giants. I apologize if any offense was taken.”