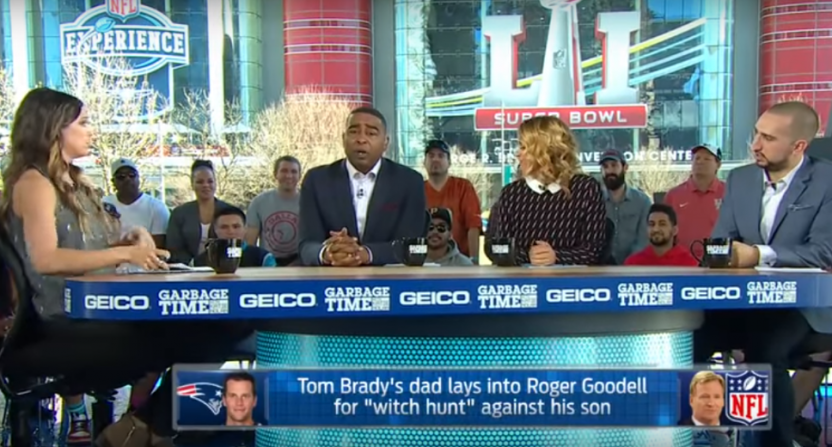 Why is Katie Nolan at ESPN rather than Fox? According to Nolan herself, the answer to that question has a lot to do with current First Things First co-host Cris Carter, or more specifically, with the way Fox booked him on the first edition of her Garbage Time Live show from the 2017 Super Bowl. GQ published a piece Monday with Clay Skipper (son of former ESPN president and current Perform Group executive chairman John Skipper) interviewing Nolan about her rise to prominence, her current work at ESPN (which includes weekly ESPN+ show Always Late With Katie Nolan, plus a podcast and SportsCenter on Snapchat segments), and much more, but what really stands out are her comments about why she left Fox.

She’d previously spoken about the growing divides between the sides on whether to sign her to a new deal and then figure out a new show format (Fox’s preference) or develop the new show and then sign a new deal (her preference), but she told Skipper that there was a particular inciting incident at the 2017 Super Bowl:

I think that I’m so worried that someone else that isn’t as invested in this as I am is going to touch it and fuck it up and they’ll just go, Whoops, and go on to their next thing. So I am so protective of all my things. I could have moved [Garbage Time] out to LA, could have grown it to an hour daily show on FS1. Right before I left I went to the Super Bowl and we did my show live, an hour daily from the Super Bowl.

Before we got out there, I said, “Look, we’re booking a panel of people to be on this show with me. They need to be people that understand what this show is. I don’t want you to get me big name athletes that have no idea who I am or what I do. They’re just going to be confused and it’s not going to work on the show. I also don’t want you to get me a panel of people that all work at Fox. Those are my only two things. I will do whatever else.”

The night before the first show live from the Super Bowl they were like, “Such and such missed his flight. So the first show is going to be you, Nick Wright, Cris Carter, two FS1 personalities”—and then a girl I had booked, Sarah Tiana, a very funny comedian. I was like, “Okay, this is going to be a disaster.” They were like, “It’s gonna be fine.”

Cris Carter brings up Deflategate. I’m like, okay so now I either have to, out of respect for him, let him talk about this on my show or be like, “It’s my show. Shut up Cris.” So I chose the second option. We got into it. It was a mess. It wasn’t good TV.

I wasn’t mad at him, I was mad at the network. Like, “I told you. I know this show better than anyone else. Cris Carter is incredible, but he will not work on this show. It’s not going to work for him.” They didn’t listen. So that was the moment that I was like, I’m not coming back to Fox.

There’s some important further context in there, including Nolan saying her initial reaction to Fox’s pitch of moving her show to Los Angeles and expanding it to an daily hour-long show was “This kind of sounds great,” but that she also wanted to develop the show with them before signing an extension and they wanted her to sign first.

So things might not have worked out between Nolan and Fox even if it wasn’t for the Carter incident, but it’s clear from her remarks to Skipper that it was a particular point of no return, as she goes on to say “I was like, that’s it. I’m done. I’m leaving.” It should be also noted that Nolan also calls Fox execs “awesome” and says “I’m not mad at them in any way,” so this isn’t particularly an Olbermann-style napalming of the bridges (and even those bridges have a funny way of getting rebuilt), but it’s fascinating to hear that the biggest sticking point in the doomed Fox-Nolan talks wasn’t moving to Los Angeles or going to a daily show (both of which had been speculated), but rather FS1’s Super Bowl booking and Carter’s behavior in particular.

While backing away from a wider deal thanks to one day’s bad booking may seem odd at first, there’s some logic to it, and it seems to have worked out for Nolan. Her comments to Skipper make it sound like this was more about her wider desire for creative control and booking control than about the particular incident, but that said incident illustrated she wasn’t going to get that the way she wanted at Fox. And given the regular programming changes made at FS1 since then and the history of their lack of support for more quirky, less-debate-focused programming (RIP, Fox Sports Live With Jay and Dan), it’s far from certain things would have gone smoothly if she did sign an extension with Fox.

It’s also far from clear that an hour-long daily show with Nolan would have worked well for FS1. Garbage Time got Fox plenty of social media buzz and even a 2016 Sports Emmy for Outstanding Social TV Experience, but never pulled particularly high linear ratings. Some of that was definitely a function of its late-night time slot, but it’s not certain that dramatically changing that show into a twice-as-long daily one would have led to ratings either. Of course, there isn’t a ton of FS1 programming that has regularly pulled solid ratings (apart from NASCAR Race Hub!), so even ratings struggles might not have led to a cancellation.

But going to a Nolan daily show would have been a big gamble for the network as well as for her, and with their perspectives on how to do that a ways apart, the parting of the ways may have worked out fine for both sides. Nolan’s no longer an odd fit in Fox’s debate-centric lineup, and she’s appearing on ESPN platforms (ESPN+, SportsCenter on Snapchat, a podcast) that don’t require her to pull massive ratings and seem like a fit for the younger, tech-saavy audience she already appears to have connected with. And it appears ESPN is willing to give her more of the creative control she wants.

While it may have worked out for everyone in the end, though, this parting was anything but smooth at the time. Nolan talks candidly with Skipper about the mental challenges she faced during the period where she was still under contract to Fox, but without a show. Fox also took a lot of flak for their handling of the situation, and it didn’t necessarily help that everyone involved was tight-lipped at the time about what was going on and why the sides were parting ways.

It’s certainly interesting to see Nolan talking candidly about what happened now, though, and it’s particularly notable to hear about the Carter Super Bowl incident as a point of no return in the Nolan-Fox relationship. That’s further proof that booking can really matter. Maybe they should have booked Carter’s fall guy instead.