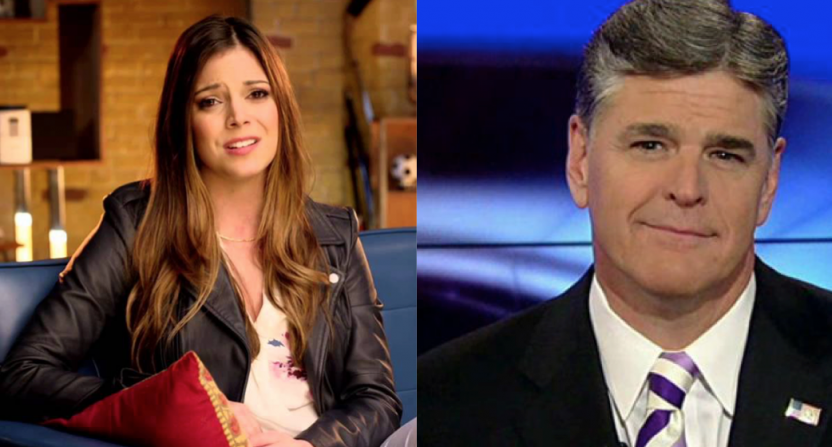 Sports media Twitter took an unusual turn Saturday night thanks to Katie Nolan calling Fox News host Sean Hannity “a literal fucking moron,” riling up Hannity’s fans, and then engaging with many of those fans. There’s plenty of criticism of Hannity out there, of course, but it’s unusual to see it from someone under the same corporate umbrella.

Nolan’s Garbage Time is currently on hiatus and we’ve heard that it won’t come back in its current format. With the uncertainty of Nolan’s role at Fox up in the air, the network said in February “we could not be more excited about Katie Nolan’s future with FOX Sports.” While Fox News and Fox Sports aren’t all that closely linked, it’s going to be interesting to see if anyone at parent corporation 21st Century Fox takes exception to Nolan unloading on someone with such status within the 21st Century Fox family.

Here’s the Hannity tweet that started it all, where he complained about a New York Times story indicating that he was a regular advisor to President Donald Trump and wondered if they or the National Security Agency were using surveillance on him :

@nytimes Any conversation I have with ANYONE is supposed to be PRIVATE. I have NEVER talked to you. Was I surveilled and unmasked by u/NSA?

@seanhannity @nytimes To say your convos are private, sure. But to suggest if something leaked that you were SURVEILLED? That's next-level self-importance

Overtly calling out any prominent political commentator these days is pretty much the easiest way to stir up a hornet’s nest on Twitter. Not long after the initial tweet to Hannity, Nolan found herself engaging with many users who take issue with her tweets.

@KurtSchlichter @seanhannity @nytimes Watch out folks, tweets are being policed by this nobody.

@idaho_expatriot @KurtSchlichter @seanhannity @nytimes Oh yeah? So people who know him and not me is what determines who wins? Check our followers then.

@RealMoneyMonkey @pzasct @seanhannity @nytimes @KurtSchlichter lol you googled me. Congrats. You skipped the part about how I'm a self-made woman, which you Hannity fans LOVE until you meet one.

@LOCAL_GRAVEYARD @seanhannity @nytimes You don't need a comma there, guy who doesn't have a name and is asking a person who has one who she is

One Twitter user said it seemed risky to call out a coworker, and Nolan said Hannity isn’t one.

@Principledstand @seanhannity @nytimes We don't work at the same company

That’s sort of true, but not really. Fox Sports may be quite separate from Fox News, but they’re part of the same 21st Century Fox company, and there are corporate similarities. In fact, Fox Sports executives have often talked about using Fox News’ style of debate as a model. And while Nolan doesn’t work out of the Fox Sports headquarters, she has worked for Fox Sports (with Garbage Time, with predecessors like Crowd Goes Wild, and with events like the Westminster Kennel Club Dog Show), and they’ve indicated they want to keep her working for them.

Calling out Hannity may be particularly risky than calling out the average coworker, too. Hannity may be one of the most-criticized media figures out there, but he’s long been seen as almost untouchable within Fox News. Nolan doesn’t seem too worried, though; someone else complained about her tweets to the FS1 account, and she responded by saying they should fire her if they aren’t cool with her behavior.

@AToppenheimer @FS1 If not, fire me.

Some of the criticisms became more graphic, and Nolan’s sarcastic responses followed suit.

@b_sands5 I make money but only because someone wants to fuck me. I need to find someone to marry me and give me money because THEY want to fuck me.

@b_sands5 I'm so tired from all this constant fucking for money.

@katienolan @pzasct @seanhannity @nytimes How many in management did you have to blow to get your show?

It wasn’t all criticism, though. Someone else went on to praise Nolan and say he’d watch her show, which she indicated is coming back:

It’s going to be interesting to see if Fox has any concerns about this. On the one hand, complaining about a (far, far removed) coworker like Hannity in these kinds of terms can be seen as bad for the company, especially given Hannity’s prominence (CNN’s Dylan Byers recently called him “Fox’s most valuable player and the man the company can’t afford to lose”). And while Fox has been fine with Nolan taking strong shots at people they have business relationships with (such as NFL commissioner Roger Goodell), that’s related to her job, and this isn’t. Will they want her to stick more closely to sports?

On the other hand, Nolan is far from the first person to complain about Hannity (who probably doesn’t care about her criticisms at all), and there could be a lot more blowback and bad publicity for Fox Sports if they hand out any sort of punishment to Nolan over this. With Nolan’s contract set to expire next year, ESPN rumored to be interested in signing her, and her current role up in the air, whatever shakes out here (if anything) could play a considerable role in Nolan’s next career move.

With the wider Fox company  having image issues at the moment thanks to parting ways with Fox News boss Roger Ailes and Fox News host Bill O’Reilly amidst lawsuits over sexual harassment; coming down hard on Nolan might extend to the negative news-cycle the network has been dealing with. We’ll see how this all plays out, but it certainly made for an unusual Saturday night on sports media Twitter.