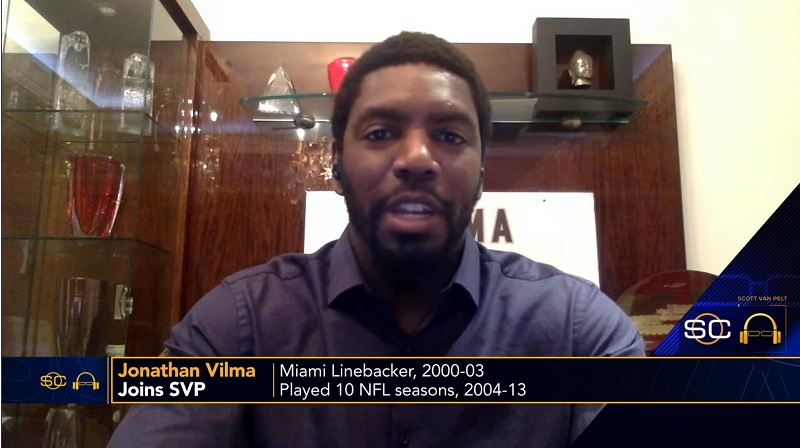 The game of musical chairs played by the NFL’s broadcast partners this offseason continues to roll along.

On Wednesday, the New York Post reported that Jonathan Vilma would be leaving ESPN for a role at Fox, which includes Vilma being added to Fox’s slate of NFL game broadcasters alongside Kenny Albert. Ronde Barber has worked with Albert in recent years, but he left the network after the 2019 season.

Two years ago, Vilma replaced Booger McFarland on ABC’s Saturday college football studio show (in what ESPN announced as a contract extension, apparently of only two years). After Mack Brown, the other analyst at the desk alongside Kevin Negandhi, left ESPN to retake the UNC job, Vilma worked alongside Mark Sanchez in 2019. Now, ESPN will once again have to fill a hole on that show, but given the network’s dizzying slate of analysts, I’m sure they’ll be able to find someone easily (perhaps…oh I don’t know…a certain analyst that won’t be on Monday Night Football this year and used to work on the show?).

As far as we can tell, Vilma only worked in the booth for (as far as we can tell) his one college game – the 2018 UAB-Northern Illinois Boca Raton Bowl. Moving into the Fox booth will be a big step for him, but NFL jobs don’t come around very often.

Where does that leave the NFL broadcaster carousel right now? Great question! Here’s a look.

Doing some quick back of the envelope math, the real issue here lies with Fox – the network has too many play by play broadcasters (what a shame) and not enough analysts, and will need to push an announcer or two down the pecking order and hire/promote an analyst or two.. They typically won’t need more than six broadcast teams on a weekly basis, and with Amin joining, it looks like those final spots will be anchored by two of Thom Brennaman, Chris Myers, and Dick Stockton (with one very obvious choice among those three, despite his standing at the company).

Here’s what Fox’s pecking order could/should look like this fall, with the final four teams set in alphabetical order by analyst.

Mark Schlereth (or Spielman, or Johnston) could easily be slotted in alongside either Burkhardt or Amin, leaving just one open slot for an analyst. Fox has plenty of possible options here, and speculating would be useless given the sheer breadth of choices. But with Vilma’s hiring, we’re one step closer to the NFL announcer carousel coming to a stop for this season. Last year, Fox and CBS announced their teams in the middle of August, so we’re still about two months from the point where all the decisions will have to be made.