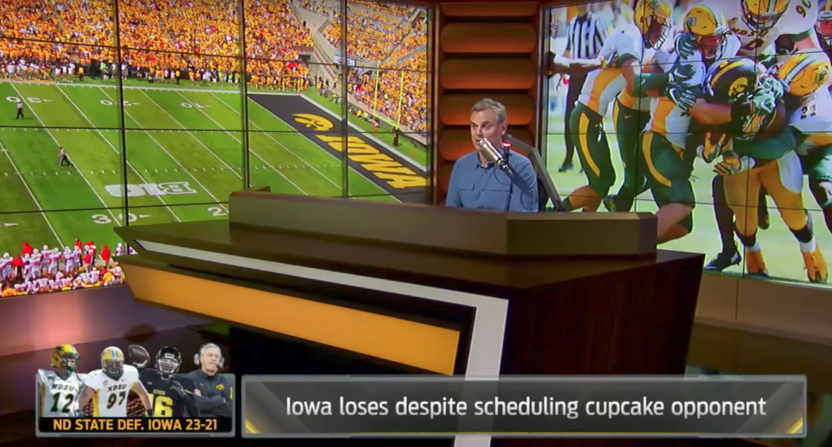 For whatever reason, Colin Cowherd has developed a persistent distaste for Iowa football. Even as the Hawkeyes have put together some good teams in recent years, the Fox radio and television host has bashed them for weak non-conference schedules, called them “posers” and declared them “the fake ID of college football.”

In May, Cowherd clashed with Fox Sports college football analyst Joel Klatt over his anti-Iowa takes, with Klatt accusing his colleague of being unfair to the Hawkeyes.

Fast-forward to Tuesday, when Land of 10’s Scott Dochterman asked Klatt and Fox play-by-play man Gus Johnson their thoughts on Cowherd’s Iowa takes. Here’s what Klatt had to say:

“I hear Colin, I listen to Colin almost every day when I can,” Klatt said Tuesday morning at Big Ten Media Days. “In particular my ears perk up whenever he talks about college football, whichever team.

“But there’s always like this level of vitriol for Iowa that was saved for Iowa. I’m always like, ‘That’s so peculiar.’ I don’t understand. I know in the radio business that can be good radio, and if that’s what he believes then more power to him.”

“I know my colleague Colin Cowherd had a whole lot of stuff to say about Iowa, and I don’t agree with him,” Johnson said. “He’s not out there, he hasn’t worked locker rooms and [traveled] to Iowa City and spent time with the community. I’ve been calling Iowa basketball for a long time. I’ve called Iowa football. I just think Iowa is, to borrow a quote, it’s not heaven, it’s Iowa. There’s something about it that’s beautiful, peaceful and good and kind and the people that go there. Maybe it’s not Ohio State, maybe it’s not Alabama. But it has a great history with coach [Hayden] Fry and what he established there and coach [Kirk] Ferentz and what he’s continuing to establish as the longest-tenured coach, not only in the Big Ten, but college football.”

It’s not as if Klatt and Johnson went all Tupac on Cowherd or anything, but their criticism was a bit pointed. Klatt suggests Cowherd is taking extreme positions because it will help his ratings, and Johnson impugns the host’s credentials to judge the Hawkeyes. Klatt and Johnson didn’t just disagree with Cowherd’s opinion, they questioned his motives for those opinions and his qualifications to offer them.

Part of the reason Klatt and Johnson are peeved about Cowherd bashing Iowa might concern the fact they have to actually cover the Hawkeyes. As FS1’s top college football broadcast team, Klatt and Johnson will one day walk into Kinnick Stadium and interact with Iowa players and coaches while holding a microphone with the Fox Sports logo on it. Cowherd’s vendetta against the Hawkeyes could easily make for some awkward encounters. That Klatt and Johnson have to answer for Cowherd’s opinions at Media Days might alone make them roll their eyes.

It’s always a little interesting to see how personalities at the same network talk about each other. Obviously, given the wide range of viewpoints on FS1 or ESPN, some analysts/hosts/reporters will object to others at times, but it can be telling to see how polite (and public) they are about it. In this case, Klatt and Johnson unambiguously sided with the Hawkeyes over their colleague.