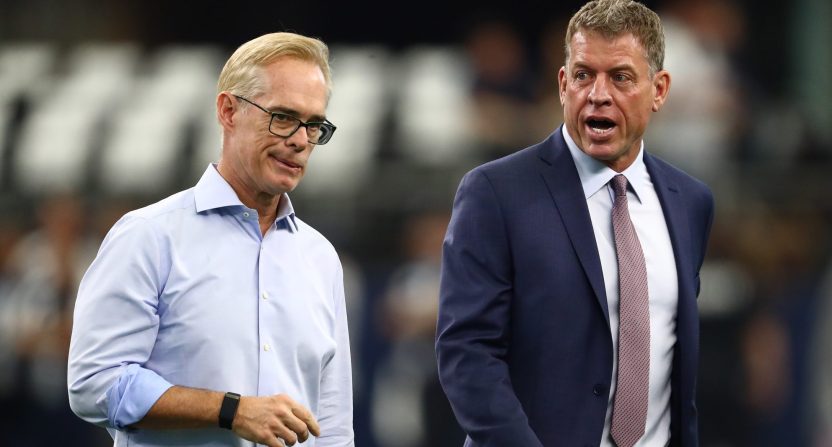 NFL Sundays on Fox with Joe Buck and Troy Aikman are an institution for modern NFL audiences the same way that Pat Summerall and John Madden on CBS were for a previous one. Perhaps that comparison just made you audibly scoff, but that doesn’t make it any less true. Sure, there’s always been a steady stream of dissenters and critics for the duo, especially for Buck, but in recent years there’s been a bit more of an appreciation for the sturdiness of their broadcasting partnership.

That may change as Amazon has been targeting Aikman and NBC play-by-play announcer Al Michaels for their own booth, and Aikman recently told Front Office Sports that he might go to Amazon (either in addition to or instead of a Fox role). If Aikman were to leave Fox, it would end a 21-year run with the network. He’s spent 20 of those years in the same booth as Buck calling some of the biggest NFL games each year, including six Super Bowls.

Buck stopped by the Sports Illustrated Media Podcast with Jimmy Traina this week and his relationship with Aikman, as well as what he might know about the future of their partnership, was a central part of the discussion. However, Buck also shared some thoughts on the state of modern sports broadcasting, his relationship with social media, and what advice he gives young broadcasters.

Buck knows all too well that criticism comes with the job, especially in the social media age. And for him, the best way to deal with it is not to engage with it at all.

“When you do a game for however many millions of people, in today’s world with social media, you realize that if you step outside the midline…or you make a mistake, I mean, mistakes happen, it’s live TV. But when it does, ‘Oh my god, I called Travis Kelce Jason Kelce, and now I’m the idiot.’ That I’m gonna get stuff hurled at me in the town square. When you do a game like that, well, let me rephrase, you should never do a game like that. You should just let it hang out and just go, but it’s becoming harder and harder to do that.”

“Legitimately, everything that comes out of your mouth, someone can say ‘you’re the stupidest person ever because, yeah, it looks like it’s 1st & 10 but, ya know, it’s really…’ You just can’t get into all that.”

When it comes to what he tells young broadcasters looking for advice, Buck says that they should tune out the noise and focus on constructive critiques.

“Turn off your social media, find two or three people that you know have your best interests at heart and can be real critics and can give you good advice. Listen to those people, turn the other stuff off. I have to do that too. Otherwise, you just get buried in that stuff and it just becomes deflating.”

During the NFL’s Super Wild Card Weekend, the multitude of games and network partners created some unique quirks, which is how Buck and Aikman called the Eagles-Buccaneers game instead of the more intriguing 49ers-Cowboys matchup, which ended up on CBS. During the broadcast of what ended up being an uncompetitive Tampa Bay win, Aikman tossed off some comments that seemed to indicate that he was a bit miffed about the assignment.

Troy speaking for everyone still watching this one ?? pic.twitter.com/bObFae5CaZ

“It’s gonna be a great game. I mean, a really good game,” said Aikman. “There’s a lot of people that’d like to be calling that game.”

Even Buck appeared to be shocked by Aikman’s brutal honesty, though Troy has since said he wasn’t upset but simply confused.

Traina asked Buck about the moment, which the broadcaster said he had “no idea” was coming.

Good stuff here from Joe Buck on this week's SI MEDIA PODCAST about his reaction to Troy Aikman's on-air comment about not being able to call the Niners-Cowboys playoff game.https://t.co/xB8VRk0N4b pic.twitter.com/1xnRh2PmGu

“When Troy said that…I have worked with him for 20 years on the air now, and I don’t think, on-air, he’s ever said anything that surprised me to the point where I almost couldn’t talk. And that got me,” said Buck.

“I had no idea,” said Buck when Traina asked if he knew Aikman was going to air that grievance. “My hand to god. On the health of my kids, I had zero idea that he would say that. I think it’s hilarious and I love it. To me, when he does that stuff, it is friggin’ gold. I love that.

“The funniest thing was, we’ve got all these people in the booth…he said it and I’m looking at Troy, who’s to my left. And then I’m just watching the reaction almost at the same time as everybody in the room, like, hands up, like, ‘Oh my god!’ But afterward, I was like, you are a beauty. I can’t believe you just said that on television and I laughed. Good, keep going. Let’s have fun.”

When Traina said that Aikman seems to have entered the “zero f***s given” zone of his career, Buck didn’t disagree, adding some context from early in Troy’s broadcasting career to explain how he got here.

“He’s edged his way in there, which, I’m all for that,” said Buck. “And, I think, when you consider where he started, and it continues to this day, but, on those Cowboys teams, he had to be the voice of reason. He had to be the straight-laced leader of the Dallas Cowboys. That was called for back then.”

“I think it just took time, and I remember early on, he said something about Donovan McNabb in a preseason game, and the reporters after the game asked Donovan about what Troy said and I think it hit him, when I say stuff…people perk up. And if he says anything with teeth in it, it’s on a crawl on different sports channels. So, he has to be really careful with that. In this world, you can be as opinionated as you want, but then you gotta live with the fallout, and you gotta answer questions about it.”

As far as whether or not Buck has considered what it will be like if Aikman does leave Fox for Amazon or elsewhere, he is trying not to think about it but respects his booth partner’s decision no matter what.

“I try not to because it’s been 20 years and I can honestly say, the same hand to the same god, he and I have never had one moment where we have felt like…at least I haven’t, and we talk about it all the time, we’re lucky that we’re good friends,” said Buck. “And in this business, with as much as there is on the line, at least in our own minds every time you go on, and this business can be kind of backstabby, everybody’s climbing over one another to make something happen for themselves, he and I just have never played that game. He’s legitimately one of my best friends and I think he would say the same about me.”

If Aikman does leave, will Buck have a say in who replaces him in the booth?

“It’s funny. I haven’t said one word to Fox about all that,” said Buck. “And they have not talked to me about all that. Not at any point.”

“I think I would be in the conversation but I think they certainly are in no way, shape, or form obligated to listen to anything I have to say. They’re the boss, I’m the guy who sits in the booth. I’ve worked with multiple people in baseball, I’ve worked with multiple people in football. I started with Tim Green and I’ve been with Bill Maas and Brian Baldinger and different people along the way. I just…it’s been 20 years, and when you do these games, that are as intense as they are, I know where he’s going and he knows where I’m going, and I know what he wants to talk about and he knows when and what I want to talk about. That’s really hard to replicate.”

You can listen to the entire discussion here.