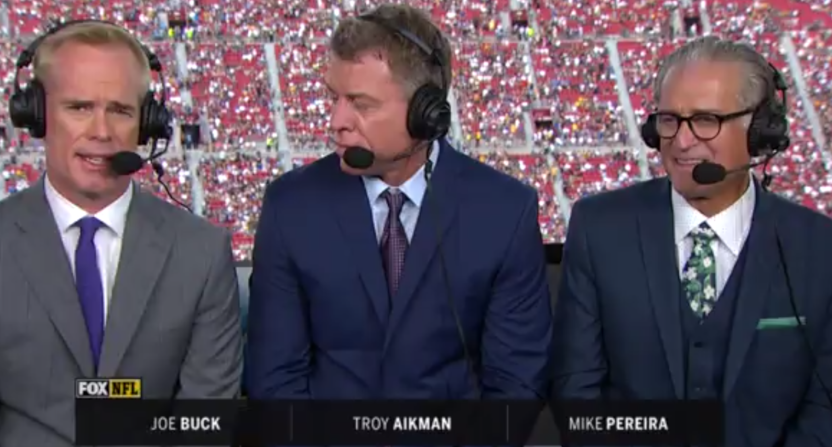 January’s New Orleans Saints-Los Angeles Rams NFC Championship Game had a lot to do with the officiating, with a non-called pass interference penalty leading to a Rams’ game-winning field goal and countless complaints and lawsuits. Those teams met again Sunday for the first time since that controversial finish, and there again wound up being a lot for Saints’ fans to complain about when it came to the officiating. And this time, the Fox broadcast team was right there with them, including officiating analyst Mike Pereira.

In January, the issue was uncalled pass interference. This past Monday, the issue was how the officials mishandled a second-quarter clock runoff. And on Sunday, New Orleans defensive linemen Trey Hendrickson and David Onyemata forced a second-quarter fumble from Rams’ quarterback Jared Goff deep in Saints’ territory, and Cam Jordan recovered the fumble and took it all the way down the field for an apparent touchdown. But the play was whistled dead on the field and ruled an incomplete pass. And while Saints’ head coach Sean Payton’s challenge saw that overturned to a fumble, the whistle meant the touchdown wasn’t counted and New Orleans instead was only given the ball at their own 13. Here’s the play:

And here’s the replay:

Here’s what Pereira had to say about this:

“Just a killer mistake that hurt the Saints so badly. When it’s that close, you have to lead the fumble. You can always come back and kill it with incomplete. But even though they give the ball to the Saints here, and it gives them the ball, it doesn’t correct the mistake that really should have resulted in a touchdown.”

Fox play-by-play broadcaster Joe Buck also had strong words for this, saying “Let’s be clear, this should have been a touchdown for the New Orleans Saints. And because of the call that was made by the official, they get the ball but they don’t get the touchdown, and the Saints are on the short end of another call yet again.”

Buck and color analyst Troy Aikman then went on to talk about how calls have now affected the Saints in three straight games.

The Saints would wind up turning the ball over on a failed fourth-down gamble on this drive, and the Rams would enter halftime with a 6-3 lead rather than a 9-6 deficit. And the Fox crew had some more criticisms for the officials after halftime. Here’s how the broadcast returned from half, with Buck again talking about the call:

And here’s what Pereira said there:

“Yeah, Joe, you’ve got to look at this play, and if it’s at all close, if you can’t tell as the referee whether it is a pass or a fumble, then you want to rule fumble. You don’t want to actually officiate to the system, but you have to keep the play alive. If it is a fumble, you can turn it into an incomplete pass, but you can’t do the reverse. It’s a critical mistake, and it just comes time and time again to the Saints.”

Those are stronger and more protracted criticisms of officiating than we often see on NFL broadcasts. But they certainly feel deserved in this case, and the conversation in the booth mirrored the conversations in many bars, living rooms and other places where people were watching.