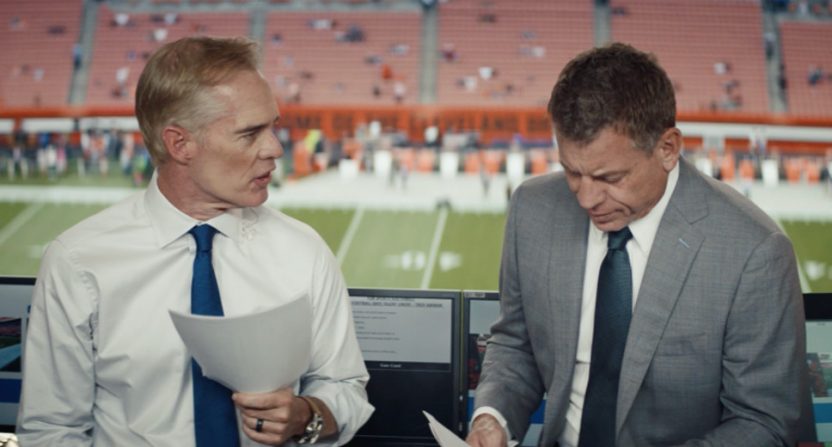 How did the clip of Joe Buck and Troy Aikman joking about a military flyover before Week 6’s Packers-Buccaneers game go public?

Buck and Aikman weren’t recorded on a hot mic from a raw feed, as Thom Brennaman was when he said a homophobic slur that was heard on an MLB.TV broadcast. (Brennaman eventually resigned as the Cincinnati Reds TV announcer.)

According to SI.com’s Jimmy Traina [hat tip, Larry Brown Sports], the exchange after the flyover at Tampa’s Raymond James Stadium occurred during a pregame rehearsal. It wasn’t part of a raw broadcast feed. So someone on the Fox crew recorded what Buck and Aikman said and leaked it to the media to make the network’s No. 1 NFL broadcast team look bad.

(More specifically, the footage was sent to Defector. Samar Kalaf wrote in his post that the clip was “sent in by a tipster.”)

Even Joe Buck and Troy Aikman find pregame flyovers to be a little much these days: https://t.co/0IZL6GhmZy pic.twitter.com/G4EpB3SYtN

Traina added that Fox is likely conducting an internal investigation to find out who leaked the footage. That was confirmed by Buck, who discussed the matter on his podcast with actor Oliver Hudson, Daddy Issues.

Hudson brought up the topic seemingly intending to tease Buck about the negative media coverage he received. Buck responded by saying he was probably better off not commenting on the situation, but wanted to explain the circumstances that led to what was seen in that clip, the context behind it, and how that footage was made public.

They begin discussing the flyover controversy at the 21:55 mark.

Joe Buck says his banter with Troy Aikman about the military flyover before Sunday’s Packers-Bucs game was not a “hot mic” situation: pic.twitter.com/0F1TmP6Xjo

“Here’s what people don’t get: They say that this was an open mic or a hot mic. It wasn’t,” said Buck.

“This was before our rehearsal. So this wasn’t like ‘Oops, we’re on! Hey, I can’t believe we just said that. Oh my god, we’re on!’ That’s not what happened. But that doesn’t matter in the reporting of it because the reporting of it is from websites that pick up a piece of audio that was clipped by somebody.”

Buck went on to explain the conversations that often take place before a broadcast goes live to break the tension and lighten the mood. In this case, the comments heard in the clip referenced remarks that were made among a broadcast crew the night before during dinner.

“Troy, in the microphone, is repeating something that he heard the night before from an unnamed person on our crew,” said Buck. “This person happens to be very far-left, saying ‘Oh — well, under Biden-Harris, that’s not gonna happen!’ Troy was repeating that while watching the flyover. So they clipped that as if he’s saying it, as if he’s a Biden-Harris fan. He was being 100 percent sarcastic.”

Aikman responded to the controversy himself Tuesday on Twitter:

I love a flyover but It was odd to see one over a mostly empty stadium but I am an unwavering patriot that loves this country, has always respected our flag, supported the men and women in the armed forces as well as those in uniform who serve & protect and for anyone to suggest

otherwise doesn’t know me, my beliefs or what I have stood for my entire life.??

Buck then confirmed that Fox was investigating who leaked the clip to Defector and how that particular footage will likely be traced back to who was working on that video and audio at the time.

“That person will get found out,” said Buck. “Because that specific shot of that flyover, which I personally thought was old and a tape and they were running out of our truck furthering our conversation that we were having internally, that was live. That was not a Fox shot. They know whose shot that was, so they know where our audio was going at that moment. It wasn’t going on TV.

To underline why he wouldn’t mock the military, Buck reminded listeners that his family has a history of service. Both his father and grandfather fought in World War II and shared their stories throughout Buck’s childhood.

Broadcasters trying to explain such situations often end up sounding as if they’re making excuses, lamenting that their remarks were recorded and went public, rather than what was actually said. But the context Buck provides makes his explanation plausible.

And it’s easier to believe that he would be a target for ridicule considering how polarizing a figure Buck is among sports fans. Addressing the situation directly instead of waiting for it to fade in the news cycle was the right approach here, especially when Buck has an outlet like his podcast to reach out to an audience.