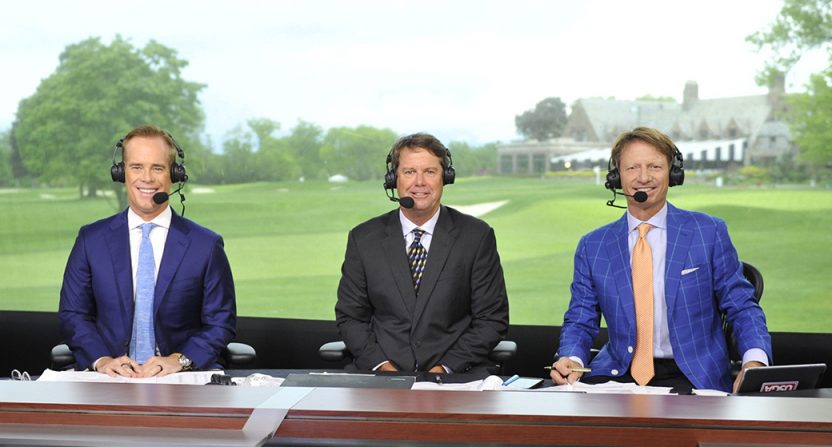 Sunday’s surprise announcement that Fox had exited its deal with the USGA seven years early was a pretty big blow for anyone who had grown to appreciate Fox’s approach to golf.

That appreciation grew along with Fox, of course, which admittedly got off to a rocky start in 2015 before they found their footing and became the most innovative network covering the sport. Fox broadcasts felt legitimately different, and they also felt like real, big events. A big part of that was having Joe Buck on the call. Appreciation for Buck himself has also obviously grown over time, and while there were a few golf-specific blunders (getting Brooks Koepka’s girlfriend’s name wrong in 2017 is almost a cliched example by now), having the chance to shift gears into golf helped prove just how versatile Buck can be as a broadcaster.

In a lengthy look-back at Golf.com, Buck himself talked about the pressure of getting it right, what makes golf different to produce, and pre-game beers for the crew. The whole thing is excellent, but a few of the most relevant moments, including this accurate section where he notes how Fox pushed golf broadcasting forward.

People are writing me condolence notes. Sorry for your loss. I would have LOVED to keep doing it. I am OBSESSED with golf. I play as much as I can with or without our 2-year-old twin boys at home. We, at Fox, would have continued to get better and better at broadcasting golf. But I wouldn’t trade our five-year run for anything, because of the people I worked with (starting with our producer, Mark Loomis), what we experienced together, what we learned. Here are some quick lessons: Let the players and caddies talk. Less is more. From the field is better than from the booth. And the Fox Sports production-side innovations will become a big part of TV coverage elsewhere. Drone shots and more ball-tracers already are.

Buck also pointed out what makes golf harder to call, and why Fox in particular was at a disadvantage:

Broadcasting golf is not like broadcasting baseball or football. You see the ball and the action through your own eyes. The story is unfolding in front of you. In golf, the story is unfolding here and there and everywhere. As the guy in the broadcast tower, you’re getting it all on screens and from reporters in the field. It’s a tricky business. And we were basically doing one PGA Tour event a year, and one LPGA event a year. (The fabulous U.S. Women’s Open, where I worked with the fabulous Juli Inkster. You want her beside you in a broadcast booth, at your member-guest, at a ballgame.) One of our basic challenges is that we weren’t getting that many reps, to use a Tigerism. That’s not an excuse. But it is a starting point.

Whether Buck meant it this way or not, it speaks to a big reason Fox is leaving early (and paying half of the rights fees for NBC to carry the USGA events.) Golf never became a bigger part of Fox’s portfolio, and while their presentation for the Women’s Open and various amateur championships was top-notch, a lack of broader content left golf at the bottom of the list for Fox when it came time to figure out how to set the schedule for a Covid-induced crowded fall calendar.

The potential for college football, the NFL, and MLB to all have games meant Fox would have been looking at some very tough choices, and unlike CBS (which carved a piece out of the actual NFL schedule for a fall Masters Sunday) they don’t have a dozens of other golf weeks throughout the year to make it worthwhile. It’s a real shame, because things were trending in a very good direction, and maybe this Buck anecdote best illustrates why the Fox vibe was such a pleasant departure:

A year after Chambers Bay, I was so eager to get the Oakmont show off to a good start. I wanted us all to breathe. I know I was on edge, going into it. Golf can put you on edge. There are a lot of rules, written and otherwise. Don’t say driving range. Do say practice tee. And a hundred others.

I had an idea. Just prior to going on the air Thursday morning, I gave one of our production assistants a little stash and told him to return with a dozen beers. We poured them into maybe 20 little Styrofoam coffee cups and had ourselves a toast. Poor Loomie. He was in a truck somewhere far away and couldn’t see a thing we were doing. We mush-clinked Styrofoam and I said, “Have fun. It’s just f—ing TV.”

They did have fun, and so did viewers. Hopefully, as with shot tracer and drone shots, the other networks follow Fox’s lead there, too.