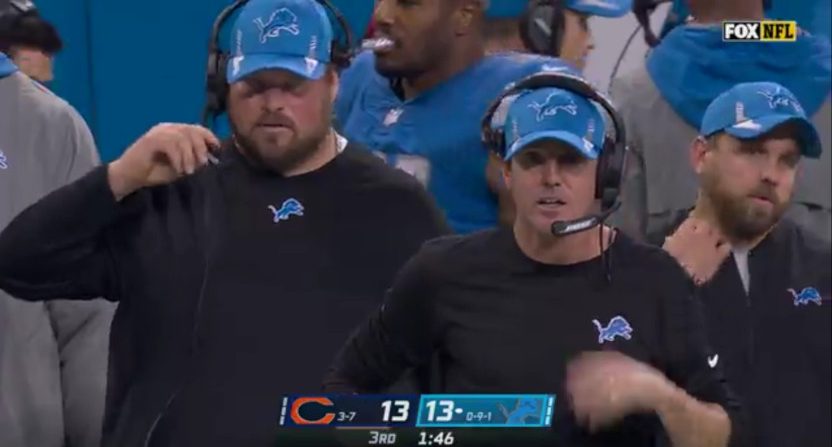 Throughout the 3-7 Chicago Bears’ early Thanksgiving game against the 0-9-1 Detroit Lions, NFL on Fox announcers Joe Buck and Troy Aikman have had some fun with the various struggles of the two teams involved. One particularly notable part of that came after the Lions scored in the third quarter, but had their go-ahead convert pushed back five yards after a too-many-men penalty (their coaches are shown reacting to that above). Buck responded to that with “They’re just not used to scoring touchdowns!” and Aikman cracked up, then said “You’re a bad man!”

"They're just not used to scoring touchdowns." "You're a bad man!" pic.twitter.com/XmD9ldoMn8

Yes, that’s a shot at the Lions, but it’s a rather fair one. Heading into this week’s games, they had just 17 offensive touchdowns this year, 31st of 32 NFL teams (ahead of only the Houston Texans). This was their second of the day (they started this game off with an early TD pass from Jared Goff to recently-acquired receiver Josh Reynolds), but that would only put them into a tie for 28th with the Atlanta Falcons (who don’t play until Sunday). And in their last three games, they’ve scored six (a 44-6 loss to the Philadelphia Eagles), 16 (a 16-16 overtime tie with the Pittsburgh Steelers), and 10 (a 13-10 loss to the Cleveland Browns) points. It’s not necessarily unfamiliarity with conversions that caused the issue here, but the Lions certainly haven’t been that familiar with conversions lately.

At any rate, the Lions made the longer conversion here, so this wasn’t a big issue. But it did lead to a funny broadcast moment.