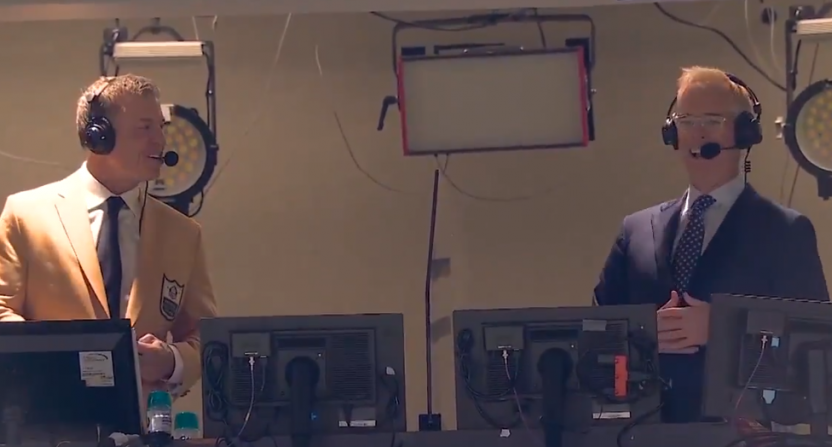 Joe Buck got an incredible surprise at halftime of Thursday Night Football between the Cincinnati Bengals and Cleveland Browns on NFL Network.

Pro Football Hall of Fame president David Baker announced that Buck will be inducted into the Hall of Fame as the 2020 recipient of the Pete Rozelle Award. Paul Rudd — a close friend of Buck’s — followed Baker in narrating a video about Buck’s accomplishments. When that video ended and NFL Network returned to the broadcast booth, Buck was stunned and congratulated by his longtime broadcast partner, Troy Aikman (who had on a Pro Football Hall of Fame gold jacket).

Buck: “Oh my God. I don’t even know what to say. I feel like… what? That’s unbelievable.”

Awesome moment as Joe @Buck finds out live on TV that he will be joining his father in the Pro Football Hall of fame!

The Pete Rozelle Radio-Television Award is an award given to one person annually “for longtime exceptional contributions to radio and television in professional football.”

Buck’s late father and legendary broadcaster, Jack, won the award in 1996, making them the only father-son duo to win it.

When NFL Network showed photos of Jack, an emotional Buck said, “Hi dad. Also honored to follow in that man’s footsteps. Great announcer, better man. And I miss him. Thank you.”

Buck, 51, has been Fox’s lead play-by-play NFL and MLB announcer for decades, with six Super Bowls called and all but two World Series announced since 1996. He’s a three-time winner of the National Sportscaster of the Year award.

In January, Bill Cowher and Jimmy Johnson were also surprised on live television about being inducted into the Pro Football Hall of Fame. Even if this is a pretty regular thing now, it remains great television each time.