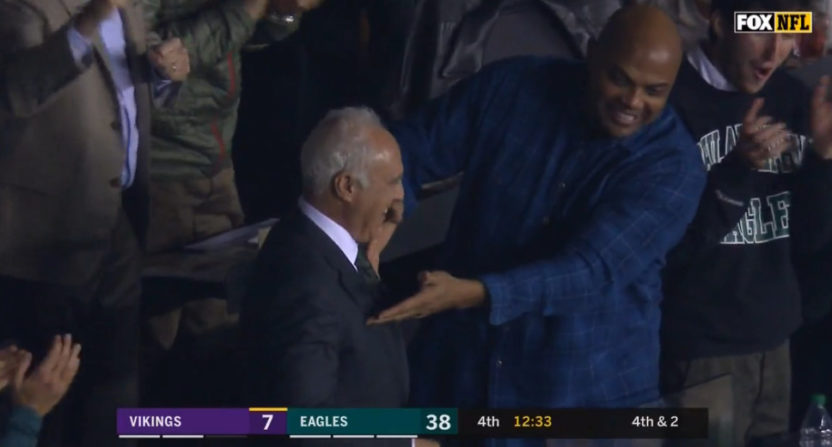 It can be difficult to call a blowout, and it sometimes leads to some comments pretty far removed from the game. One of those came from play-by-play broadcaster Joe Buck during Fox’s broadcast of the NFC championship game between the Minnesota Vikings and Philadelphia Eagles Sunday.

With the Eagles up 38-7 (which would eventually be the final score) near the start of the fourth quarter, the broadcast came back from commercial to a shot of NBA on TNT analyst Charles Barkley (who played for the Philadelphia 76ers from 1984-92) watching the game with Eagles’ owner Jeffrey Lurie, and that led to Buck breaking out an impression of Barkley:

“How about this pair? Jeffrey Lurie being saluted by Charles Barkley. ‘This man’s not turrible.’ 4th and 2.”

Buck’s impression was… not well-received.

Joe Buck just did an impersonation of Charles Barkley. I’m calling the police.

When Joe Buck is doing his Charle Barkley, you know it's over.

However, one Twitter user made the valid comment that this actually stood up pretty well compared to the rest of the game.

Joe Buck doing a Charles Barkley impression has been the most exciting thing from this entire game.#PHIvsMIN