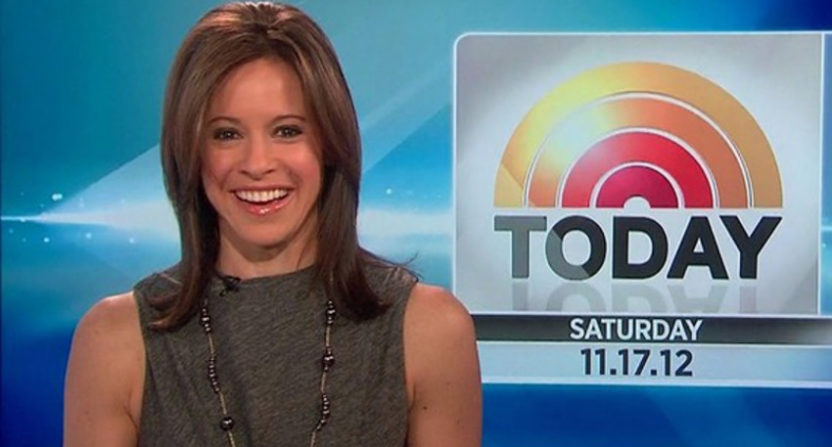 FS1’s upcoming First Things First morning show has a new host. Ryan Glasspiegel of The Big Lead reported Thursday that Jenna Wolfe, most recently a lifestyle and fitness correspondent for NBC’s Today, will be hosting the new 6-9 a.m. Eastern morning show with Nick Wright and Cris Carter when it launches Sept. 5. Michael McCarthy of The Sporting News previously mentioned last month that Wolfe was a finalist for the job, but that she was talking to both FS1 and ESPN, and was a candidate for Mike Greenberg’s forthcoming ESPN morning show as well. Now, it looks like FS1 has won out; the news isn’t official yet, but Glasspiegel writes that Wolfe “will join FS1 to host First Things First.”

Wolfe has some experience in sports. She worked at several local affiliates, and was the first female sportscaster at Philadelphia’s WPHL. She worked for MSG and was a weekend sports anchor on New York’s WABC from 2004-2007 before joining Today. She served as a general Today correspondent from 2007-2014, including as a Weekend Today news anchor from 2012-14, then became Today’s “first lifestyle and fitness correspondent, covering everything from healthy living and wellness to strength and body improvement” in 2014. (Her Wikipedia page views that as a demotion, though.) She left Today in January 2016, and did her own morning show on Periscope for seven months, ending in May. Her morning TV experience may be useful as well in this new role.

Interestingly enough, 2014 was also when former Fox Sports president of national networks Jamie Horowitz had an exceptionally brief stint running Today, getting fired a month before his official start date over alleged clashes with NBC News president Deborah Turness as well as on-air talent and producers. McCarthy wrote in July that FS1’s talks with Wolfe began before Horowitz was fired, and that the two knew each other from his Today work in 2014. However, his exit doesn’t appear to have stopped her move to Fox.

Wolfe was born in Jamaica, moved to Haiti when she was five and moved to the U.S. when she was 15. She’s a Binghamton University graduate, and worked at network affiliates in Rochester and Binghamton in addition to those already mentioned. She has also appeared on Iron Chef America, and she has two children with her partner, NBC News correspondent Stephanie Gosk. It will be interesting to see what she brings to the table on First Things First, how she fits in with Wright and Carter, and if that show will be able to gain traction in a crowded morning TV landscape.

[The Big Lead; photo from Imgur]