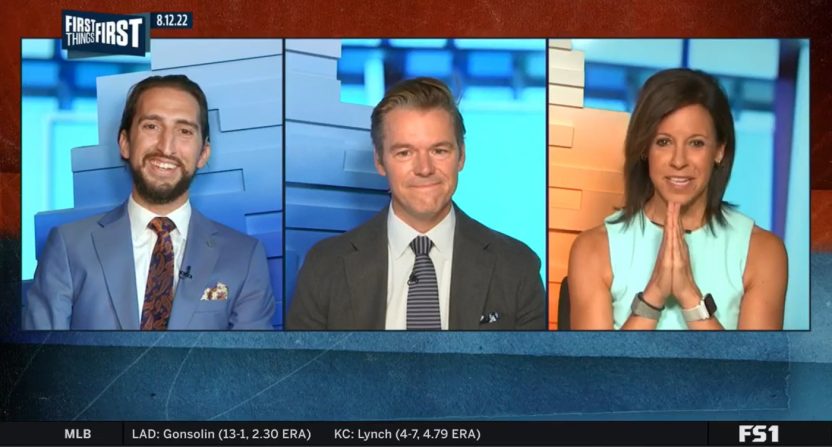 Through the multiple iterations of FS1 morning show First Things First, Nick Wright and Jenna Wolfe have been the only constants. But that’s about to change, as Friday morning, Wolfe announced she was leaving the show and the network.

“Today is my last show, my last day here at FS1,” Wolfe announced. “I’m heading off to do some other things, but these awesome guys will carry on and do their thing so well like they’ve been doing for the last couple of years.”

“What’s important is I will be watching you guys and I will be rooting for you guys,” Wolfe added. “And for you at home, thank you so much for waking up with us every day. It meant the world to me.”

Wolfe proceeded to offer First Things First the best sign-off imaginable considering the landscape of the show and her longtime co-host Nick Wright.

“It is with grace and love and kindness that I say to you,” Wolfe continued as she began to sound emotional. “It’s Jordan. It’s always been Jordan. And I’m sorry I had to wait to the very end to tell you, it was Michael Jordan.”

Wright, who might be the biggest LeBron James fan in all of sports media, recently placed Jordan at No. 3 on his Top 50 NBA Players of the Last 50 Years list and has often touted James in the GOAT debate.

Wolfe and Wright launched First Things First alongside Cris Carter on FS1 in September 2017. The show went through several changes in recent years and those are likely to continue beyond Wolfe’s departure.

Earlier this year, Andrew Marchand of the New York Post reported Craig Carton reached a deal to launch a new morning show for FS1 beginning this fall. With the network unlikely to bump Skip Bayless and Shannon Sharpe, who yell at each other daily from 9:30 – noon EST, First Things First seemed like the more probably show to get bumped by the brash WFAN radio host.

Recently, The Post reported Nick Wright and First Things First could move to the afternoons as Carton joins the network’s morning lineup. First Things First will be off-air next week, but is currently scheduled to return to its morning timeslot Monday, Aug. 22. FS1 has not announced a new fall lineup yet, but this week, the second hour (4pm) of Speak for Yourself was cut, which could pave way for an afternoon iteration of First Things First.