When FS1 launched in 2013, the network’s motto was “The One for Fun.” It was a bit of a sophomoric tagline as the new upstart on the cable sports scene tried to position themselves as the hip, trendy new alternative to stodgy old ESPN. But it worked in at least giving the network an identity.

FS1 was going to be everything you wish ESPN could be or used to be because ESPN had sucked the fun out of sports with Stephen A. Smith yelling at you for 20 hours out of the day.

In those early days FS1 gave you highlights on Fox Sports Live with acclaimed Canadian sports anchors Jay Onrait and Dan O’Toole, the network mocked Skip Bayless and ESPN’s obsession with debating Tim Tebow, and there were indeed some fun moments along the way.

The pair were the centerpiece of Fox’s efforts to build the new network and compete with SportsCenter. FS1 wasn’t perfect by any means and Fox Sports Live had some evolutions to make along the way. Their planned athlete panel didn’t quite work out as anticipated, but once FS1 handed the reins to Jay & Dan to do what they did to make them successful in Canada, the show seemed to find its groove.

Now a few years later, Fox Sports Live is cancelled and Onrait and O’Toole are on their way out at FS1 thanks to the network’s push towards “Emrbace Debate 2.0” and hiring every former semi-controversial ESPN talking head they can get their hands on. That list includes Skip Bayless, Colin Cowherd, Jason Whitlock, Rob Parker, Chris Broussard, Cris Carter, Ray Lewis, and others.

What’s the opposite of fun? Agony? Boredom? Misery? Apathy? FS1: The One for Apathy! Doesn’t quite have the same ring to it… 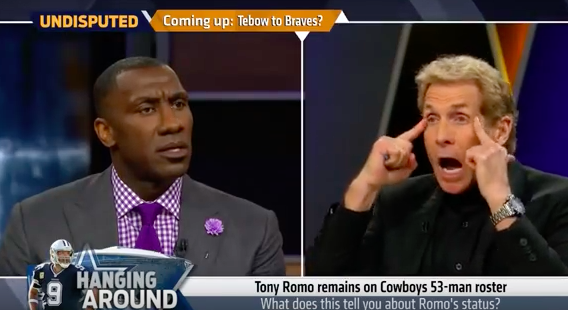 It’s a sad day for fans of Onrait and O’Toole who loved seeing their irreverent and humorous way of presenting sports stateside and for those people who really did want an alternative to ESPN. There were a decent amount of sports fans rooting for FS1 to succeed early on to provide something different and some competition for ESPN. Given FS1’s shift to the dark side of sports television and going all-in with the most polarizing personalities in sports media, who exactly is rooting for them now?

The writing has been on the wall for some time for Onrait and O’Toole. In 2016 FS1 took away the highlight-focused version of Fox Sports Live, taking them out of their studio, laying off staffers, and relegating the pair to a drastically scaled-back late night show. While Bayless, Cowherd, and Whitlock were getting all the promotion for their new shows, Onrait and O’Toole were hardly visible anymore. Lately it’s been clear where FS1’s priorities lie. With the pair predating the hire of Jamie Horowitz, it was only a matter of time until the new regime at Fox wanted to move in a new direction as they don’t fit into his plans for Embrace Debate 2.0.

Let this fact soak in: the last time the official Fox Sports Twitter account mentioned either Onrait or O’Toole’s Twitter handle to promote their show was February 23rd… of 2016! The Fox Sports Live account has been mentioned by @FoxSports just four times since July 2016. In its place, thousands of tweets about Skip Bayless and the Cowboys.

If you missed the debut of the new format of @FOXSportsLive with @JayOnrait & @fs1otoole last night, you're in luck. https://t.co/YbYojkDqCR

Furthermore, the Fox Sports Live YouTube channel with its 3,376 videos has been taken down and all 154 editions of the Jay and Dan Podcast. The network also locked down their Twitter pages. Thanks for your three and a half years of service, now we’re going to pretend that you never existed.

The other piece in Onrait and O’Toole leaving Fox is that the pair were never really given a chance thanks to Fox’s own miscalculation of expectations. Fox hoped Fox Sports Live would compete with ESPN and that was just never going to happen. We’re three and a half years into FS1’s quest to take on ESPN and the network is no closer to drawing level with Bristol than when they first started. That’s not Onrait and O’Toole’s faults, that’s the reality of how difficult the challenge is for FS1 when ESPN has a 30+ year head start on them.

Consider this: Fox Sports Live drew 57,000 viewers at midnight on Wednesday this week according to TV Sports Ratings. At the same time SportsCenter was drawing 10 times the audience with 556,000 viewers. But that gap exists all across the network. Speak for Yourself drew 80,000 viewers on Tuesday on FS1 while PTI had 756,000 viewers. That’s almost a 10-1 margin as well, but the Cowherd-Whitlock program likely isn’t getting canceled anytime soon. Elsewhere, The Herd (100k viewers) and Undisputed (92k viewers) both were bested by around a 4-1 margin by ESPN on Tuesday as well.

Is there really that much difference between being beat 10-1 and being beat 4-1? And if that’s the best that FS1 can do after months and months of promotion and millions of dollars being poured into debate, what hopes does the network have long term?

It’s hard to see how this is a successful long-term strategy. Even if Cowherd and Bayless double their audiences (which is very hard to imagine) they’ll still be not even halfway up the mountain in terms of toppling ESPN. Instead of focusing on live rights and keeping that feel-good mentality around the network, FS1 has chosen to go all in holding a pair of deuces trying to crack a pair of aces.

It’s impossible to know how successful Onrait and O’Toole would have been at FS1 had Fox stuck to their original vision because it was abandoned entirely. Maybe FS1 wouldn’t have been any higher in the ratings, but at least the network could have maintained that alternative quality instead of being nothing but ESPN recyclables.

FS1 turned the page on fun and is now focused on being as loud and divisive as possible. Can a sports network really be built solely around daytime debate?

FS1 has given up on news, they’ve given up on highlights, and they’re going all-in with the Bayless-Cowherd-Whitlock brand of 24/7 debate about the Dallas Cowboys.