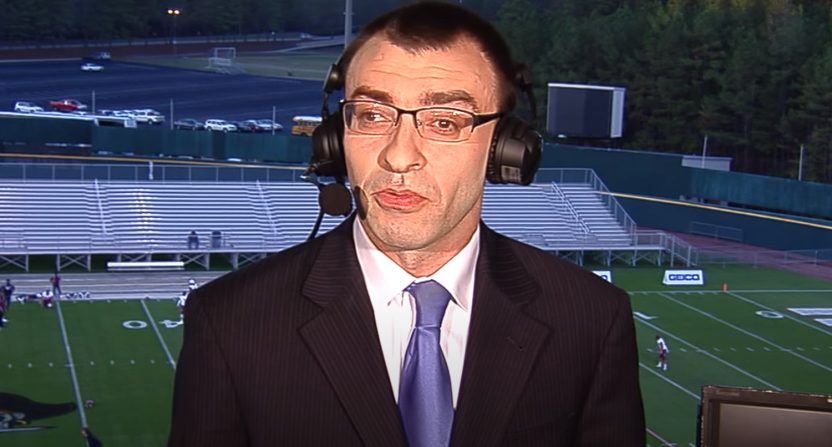 This summer, Jason Benetti left ESPN for Fox for a national role primarily focused on college football, and that’s most of what he’s called for them. But Fox’s release there indicated Benetti would be “contributing to the network’s live sports slate beginning with college football this fall,” and there was discussion even at that time that he would likely take on MLB work for them as well (Benetti is the primary local TV voice of the Chicago White Sox). He’s now getting another new opportunity, calling the NFL on Fox Cardinals-Falcons game:

Jason Benetti will call his first NFL game for Fox on Sunday. He has Cardinals at Falcons with analyst Brady Quinn and reporter Megan Olivi. (Benetti previously called the NFL for ESPN Radio.)

The 39-year-old Benetti has been on a good run in recent years. He made his Olympics debut for NBC last summer (the rescheduled 2020 Tokyo Games), calling baseball. He also voiced much of Peacock’s national baseball package this year with rotating analysts from the involved teams’ local broadcasts, speaking about how that required a “best middle” approach. And he continued his ESPN work (mostly on MLB, college football, and college basketball on TV, plus also the NFL and more on ESPN Radio, and even some weird things like an electrician championship on ESPN8 The Ocho) until joining Fox last summer.

This fall has seen Benetti doing a lot of college football for Fox alongside Brock Huard, including the Pac-12 championship game. And now he gets to expand to some NFL as well. This game isn’t a particularly high-profile assignment, with the 4-11 Cardinals facing the 5-10 Falcons, and it looks set to be seen mostly in those markets, but that’s a nice, low-stakes way to make a debut. It will be interesting to see how Benetti does here, if he winds up calling more NFL for Fox down the road, and how else they wind up using him.

[Jeff Agrest on Twitter; image of Benetti from a video he did for the Cerebral Palsy Foundation in 2015]